Joseph William Martin Jr. (November 3, 1884 – March 6, 1968) was an American politician who served as the 44th Speaker of the United States House of Representatives from 1947 to 1949 and 1953 to 1955; he represented the district covering North Attleborough, Massachusetts. He was the only Republican to serve as Speaker in a sixty-four year period from 1931 to 1995. He was a "compassionate conservative" who opposed the New Deal and supported the Conservative coalition of Republicans and southern Democrats, especially on opposing labor unions.[1] He lost the role of House Republican leader to an even more conservative Midwesterner.

Joe Martin was born in North Attleborough, Massachusetts, the son of Catherine (Katon) and Joseph William Martin, a blacksmith.[2] He graduated from North Attleborough High School, where he played shortstop on the school baseball team. He also played semi-professional ball in an intercity league, from which he earned ten dollars per game.[3] Martin worked for the Evening Chronicle, first as a newspaper delivery boy and then as the managing editor and publisher. In his autobiography entitled My First Fifty Years in Politics, Martin describes the North Attleborough where he was reared:

I made still more friends as a delivery boy for the North Attleboroough Evening Chronicle . Our world was much smaller and more intimate then than it is now [1960]. The population of the town was only four thousand, and it seemed that everyone knew everyone else. The men and women were more disposed then than they are today to give a young fellow a lift when he was starting out. No one bothers anymore. People are colder, more indifferent than they used to be.[4]

Though Martin had intended to attend Dartmouth College, he instead remained with his newspaper work, where his future prospects seemed promising. "I felt that I should keep working and take some of the burden off my parents by helping put my younger brothers through college," noting that he used most of his $750 annual salary as a state senator to defray Edward's expenses at Dartmouth.[5]

"Redistricting is an officeholder's nightmare because overnight it can change the makeup of his constituency sufficiently perhaps to cost him the next election. The dread of everyone who holds an elective office within a given district is that when the boundaries are redrawn, as they are from time to time because of population changes, he will lost a friendly town or pick up a hostile one and that either way the vote will shift against him. The truth of the matter is that redistricting goes to the heart of democratic government. Indeed it can determine which party controls Congress."[6]

Martin was the Chairman of the Republican National Committee from 1940 to 1942, having been recruited to that position by presidential nominee Wendell Willkie, whose nomination came as a complete surprise to political pro Martin. During the New Deal, he stood out as a major opponent of Franklin D. Roosevelt's policies and opposed his internationalist outlook on foreign affairs. However, he supported a few New Deal measures, such as the establishment of the minimum wage.

During the 1940 presidential campaign, Martin achieved a measure of notoriety as one-third of President Roosevelt's famous denunciation of "Martin, Barton and Fish." The other two were fellow GOP House members Bruce Fairchild Barton and Hamilton Fish III.

In 1960, McGraw-Hill published My First Fifty Years in Politics, by Joe Martin as told to Robert J. Donovan, a lively and detailed account of Martin's role in American politics over a half-century. Martin was the longtime publisher of The Evening Chronicle newspaper in North Attleborough. After his death it merged with a nearby rival and became The Sun Chronicle newspaper.

Martin was elected House Minority Leader following Republican gains in the 1938 elections. He served as Speaker of the House of Representatives on two separate occasions from 1947 to 1949 and from 1953 to 1955. These terms represented two Republican short-term majorities in the House, and Martin's two terms were bookended by Sam Rayburn, the Texas Democrat and mentor of Lyndon Johnson with whom Martin enjoyed a warm personal relationship.

In 1948, Martin traveled with his presidential nominee Thomas E. Dewey in North Attleborough, where Martin's mother, Catherine (died 1957), told the confident Dewey, the governor of New York, that he was too complacent in the campaign and could not take victory for granted. "Don't take it so easy," she admonished.[7] Later Dewey confessed to Martin that Dewey could be more forceful in speaking on behalf of other candidates, such as Eisenhower, than he could for himself because of Dewey's innate hesitancy to tout his own abilities.

In 1952, Martin urged General Douglas MacArthur, whom he had invited to give the speech before Congress popularly called "Old Soldiers Never Die," to seek the Republican presidential nomination. MacArthur, however, favored U.S. Senator Robert A. Taft, of Ohio, who lost the nomination to Willkie in 1940, to Dewey in 1948, and to Dwight Eisenhower in 1952. Eisenhower then defeated Governor Adlai E. Stevenson II of Illinois.

In his capacity as leader of the House Republicans, Martin presided over the Republican National Convention on five occasions between 1940 and 1956. In 1940, he was instrumental in the choice of Senate Minority Leader Charles L. McNary of Oregon as Wendell Willkie's running mate. His most controversial role was at the 1952 Republican National Convention, when several of his rulings were seen as tilting the nomination to Dwight D. Eisenhower over Robert A. Taft.

In preparation for the 1952 elections, Martin traveled to Hot Springs, Arkansas, for a regional Republican meeting called by state party chairman Osro Cobb, a former member of the Arkansas House of Representatives, to unveil a potential strategy to make the GOP competitive in the American South. "We came away from the meeting more determined and better prepared to advance the two-party system in the South," recalls Cobb in his memoirs, as the Republicans won at the presidential level that year in Tennessee, Texas, Florida, and Virginia.[8]

Martin was in the Speaker's chair presiding over the House on March 1, 1954 when four Puerto Rican independence activists opened fire on the House, wounding five Congressmen. According to the later recollection of House Doorkeeper William "Fishbait" Miller, Martin reacted by wrapping himself in the flag behind the Speaker's chair.

Martin would be the last Republican to serve as Speaker of the House until the election of Newt Gingrich of Georgia in the aftermath of the Republican Revolution almost forty years later.[9] Martin remained leader of the House Republicans until 1958, when the party experienced heavy losses in that year's elections. In the aftermath, Martin was ousted from the leadership by his deputy, Charles A. Halleck.

In spite of this defeat, Martin chose to remain as a backbench member of the House. Eight years later, in 1966, he was ousted from his seat in the Republican primary by the more liberal Margaret Heckler, who was forty-six years his junior. He was also one of six Speakers to serve more than one non-consecutive term, and the second Republican. 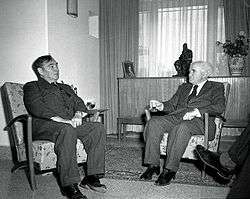