Jaora(जावरा) is a city and a municipality in Ratlam district in the Indian state of Madhya Pradesh. Jaora is located in the Malwa region, between Ratlam and Mandsaur. It was the capital of the princely state of Jaora before Independence. During the Mourning of Muharram, thousands of people from all over the world visit the shrine of Hussain Tekri. Jains visit Jaora as a place that the Jain ascetic Rajendrasuri practiced tapasya.Here resides inspirating speaker Yash Jain

The state was founded by 'Abdu'l Ghafur Muhammad Khan, a Muslim of Afghan descent. He was a cavalry officer serving the Pindari leader Amir Khan. He later served the Holkar maharaja of Indore, subduing Rajput territories in northern Malwa and annexing their lands. In return for his services, he was granted the title of Nawab in 1808. The state was confirmed by the British government in 1818 by the Treaty of Mandsaur. 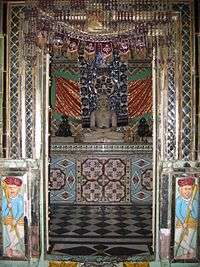