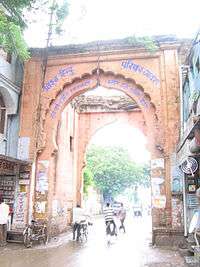 Jaora State was a 13 gun-salute princely state of the British Raj. It was part of the Malwa Agency.[1]

The total area of the princely state, with the dependencies of Piploda and Panth-Piploda, was 1,471 km2 (568 sq mi). Jaora state was divided into four tehsils, Jaora, Barauda, Tal, and Barkhera. The chief crops were millets, cotton, maize and opium.

Jaora State was founded by 'Abdu'l Ghafur Muhammad Khan, a Muslim of Afghan pashtun descent and a Rohilla in 1808. In 1818 the state became a British protectorate. 'Abdu'l Ghafur Muhammad Khan was a cavalry officer serving the Pashtun leader Muhammad Amir Khan. He later served the Holkar maharaja of Indore State, subduing Rajput territories in northern Malwa and annexing their lands. In return for his services, he was granted the title of Nawab in 1808. The state was confirmed by the British government in 1818 by the Treaty of Mandsaur.

The rulers of the state bore the title 'Nawab'.[3]