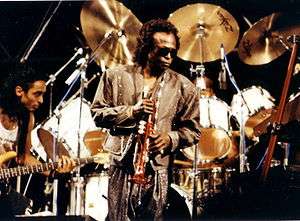 Trumpeter Miles Davis in 1989. Davis was one of the key innovators of jazz fusion, a genre of music which developed in the late 1960s by blending the improvised solos of jazz with the rhythms and amplified electric instruments of rock music.

Jazz improvisation is a key aspect of jazz. Basically, improvisation is composing on the spot, in which a singer or instrumentalist invents solo melodies and lines over top of a chord progression played by rhythm section instruments (piano, electric guitar, double bass, etc.) and also accompanied by drum kit. While blues, rock and other genres also use improvisation, the improvisation in these non-jazz genres typically is done over relatively simple chord progressions which often stay in one key (or closely related keys using the circle of fifths, such as a song in C modulating to G).

Along with serious or art music, jazz improvisation is distinguished from other genres use of this approach by the high level of chordal complexity, often with one or more chord changes per bar, altered chords, extended chords, unusual chords (e.g., augmented chords), and ii-V-I progressions, all of which typically move through multiple keys within a single song. However, since the release of Kind of Blue by Miles Davis, jazz improvisation has also come to be associated with modal harmony and improvisation over static key centers, while the emergence of 1950s-era free jazz has opened up a much wider variety of styles of jazz improvisation, such as "free blowing", in which the soloists improvise freely and ignore the chord changes.

Melodic variation and playing "by ear"

From the Dixieland era through to the swing music era, many solo performers improvised by varying and embellishing the existing melody of a song and by "playing by ear" over the chord changes. While this approach worked well during these musical eras, given that the chord progressions were simpler and used less modulation to unusual keys, with the development of bebop in the 1940s, the embellishment and "playing by ear" approach was no longer enough.

While Dixieland and swing music were both designed for the enjoyment of listeners, and in the case of swing, for dancers, bebop was more of a "musician's music". While there are important bebop tunes with vocals and lyrics, many of the most important bebop tunes are instrumentals. Bebop used complex chord progressions, unusual altered chords and extended chords, and extensive modulations, including to remote keys that are not closely related to the tonic key (the "main" key or "home key" of a song). Whereas Dixieland and swing tunes might have one chord change every two bars with some sections with one chord change per bar, bebop tunes often had two chord changes per bar with many changing key every four bars. In addition, since bebop was written for listening rather than dancing, the tempi were not constrained by the need for danceability; as a result, bebop tunes were often faster than those of the swing era.

With bebop's complex tunes and chords and fast tempi, melodic embellishments and "playing by ear" were no longer sufficient to enable performers to improvise effectively. Leading bebop soloists such as saxophone player Charlie Parker began to solo by using scales associated with the chords and by using the chord tones and themselves as a framework for the creation of chromatic improvisation.

Modes are all the different musical scales and may be thought of as being derived from various chords. Musicians can use these "modes" as a pool of available notes. For example, if a musician comes across a C7 chord. The natural mode to play over this chord is a "C mixolydian" scale.

These are various chord derivations:

One of the key concepts of improvisation in bebop and subsequent jazz eras is targeting, a technique used by Charlie Parker.[1] The main idea of targeting is landing on the tones of a chord. A chord is built up of a root (1st) and the notes a 3rd, 5th, 7th, 9th, 11th and 13th above the root in the scale. There are a number of ways to target a chord tone. The first is by ascending or descending chromatic approach (chromatic targeting). This means playing the note a semitone above or below one of the chord tones. In the key of C, the notes in the tonic chord are C(1), E(3), G(5), and B(7). So by playing an E flat at the end of a line then resolving to an E, this would be one basic example of targeting and would be targeting the third of the chord (E♮). This may be used with any factor of any type of chord, but rhythm is played so that the chord tones fall on the downbeats.[1]

In bebop melodic improvisation, targeting often focused on the 9th, 11th and 13th of the chord - the 'color tones' - before resolving later in the phrase to a 7th chord tone. In bebop the 9th, 11th and 13th notes were often altered by adding sharps or flats to these notes. Ninths could be flatted or sharpened. Elevenths were typically played sharpened. Thirteenths were often played flat. Enclosure is the use of scale tone(s) above the targeted note and chromatic tone(s) below, or scale tone(s) below and chromatic tone(s) above.[2]

Another technique in jazz improvisation, used by Charlie Parker and most great jazz soloists,[3] is known as the "three to flat nine" (these numbers refer to degrees of the scale above the root note of a given chord in a chord progression). This is a very bebop approach to improvisation, similar to targeting. This technique can be used over any dominant chord that can be treated as a flat nine (b9) dominant chord. It entails moving from the third of a dominant chord, to the flat nine of a dominant chord, by skipping directly to the ninth, or by a diminished arpeggio (ascending: 3rd, 5th 7th, ♭9th). The chord often resolves to a major chord a perfect fourth away. For example, the third of a G7 chord is B, while the flat ninth is A♭. The chord resolves to C and the note A♭ leads to G.[3]

Lines (also known as licks) are pre-planned ideas the artist plays over and over. Lines can be obtained by listening to jazz records and transcribing what the professionals play during their solos. Transcribing is putting what you hear in a record onto music paper. Cells are basically the same things as lines, but they are shorter.

Phrasing is a very important part of jazz players' set of improvisational skills. Instead of just playing a sequence of scale and chord notes that would work based on the chords, harmony, etc., the player builds an idea based on a melodic motif. The player in effect extemporizes a new melody for a tune's chord progression. Alto saxophonist Charlie Parker, who is considered to be an exemplar of jazz improvisation, paid special attention to the beginning and ending of his solos where he placed signature patterns that he developed over the years.[4] The middle part of his solos used more extemporaneous material that was created in the moment. This shows a developed style of musical phrasing where the shape of the melody has a logical conclusion. With his strong beginning, Parker was free to create solos that demonstrated musical phrasing, and led to a logical and memorable conclusion. Examples of this motif-based approach in a compositional context are found in classical music. In Beethoven's fifth symphony, the first rhythmic and melodic idea is played again with many variations.[4]