The 1908 Republican National Convention was held in Chicago Coliseum, Chicago, Illinois on June 16 to June 19, 1908. It convened to nominate a successor to the popular GOP President, Theodore Roosevelt and his Vice President, Charles W. Fairbanks.

The Republican platform celebrated the Roosevelt administration's economic policies such as the keeping of the protective tariff, establishment of a permanent currency system (the Federal Reserve), additional government supervision and control over trusts. It championed enforcement of railroad rate laws, giving the Interstate Commerce Commission authority to investigate interstate railroads, and reduction of work hours for railroad workers, as well as general reduction in the work week.

In foreign policy, it supported a buildup of the armed forces, protection of American citizens abroad, extension of foreign commerce, vigorous arbitration and the Hague treaties, a revival of the U.S. Merchant Marine, support of war veterans, self-government for Cuba and the Philippines with citizenship for residents of Puerto Rico.

In other areas, it advocated court reform, creation of a federal Bureau of Mines and Mining, extension of rural mail delivery, environmental conservation, upholding of the rights of African-Americans and the civil service, and greater efficiency in national public health agencies.

The platform lastly expressed pride in U.S. involvement in the building of the Panama Canal, the admission of the New Mexico and Arizona Territories; called for the celebration of the birthday of Abraham Lincoln; and generally deplored the Democratic Party while celebrating the policies of the Republicans. 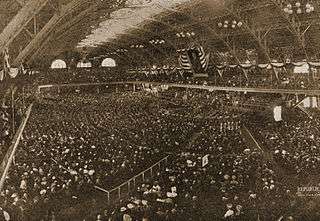 The 1908 Republican National Convention in session.

The following individuals spoke at the 1908 Republican National Convention. Many spoke with the goal of nominating a specific nominee as this was before the age of the primary and they were all decided at the convention.

As for the smaller number of speeches than today, this was caused largely by the fact that only actual observers saw this convention due to lack of broadcast media at this time. There were also more convention business items to take care of since nominations back then always went all the way to the convention where someone was officially nominated. This was due to the lack of a sufficient primary season for the nomination. For this same reason, nominating speeches were given.

Prior to the convention, Vice President Charles Fairbanks and New York Governor Charles Evans Hughes both seemed like plausible nominees, but Roosevelt was determined to pick his own successor.[1] Though Roosevelt preferred Secretary of State Elihu Root, Root's age and background in corporate law made him an unpalatable nominee, so Roosevelt instead supported Secretary of War William Howard Taft.[2] Entering the convention, Taft, buoyed by the support of the popular Roosevelt, was virtually assured of the nomination.[3] Taft won the presidential nomination on the first ballot, overcoming Fairbanks and a few other candidates.[4]