José Leandro Andrade (November 22, 1901 – October 5, 1957) was an Uruguayan footballer who played at wing-half. He was nicknamed 'The Black Marvel' (maravilla negra). During his prime he was regarded as one of the finest footballers in the world.[1] 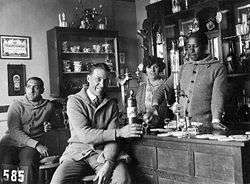 Andrade (behind the bar) serving a drink to his Uruguayan teammates in Amsterdam (1928).

Andrade was born in Salto in 1901 to an Argentine mother. José Ignacio Andrade, who is believed to have been his father, was listed on his birth certificate as a witness. The older Andrade, who was 98 years old at the time of José Leandro Andrade's birth, had been an expert in African magic and is believed to have been an African-born slave who had escaped from Brazil.[2]

At an early age Andrade moved to the Palermo barrio in Montevideo where he lived with an aunt.[3]

Prior to the introduction of professional football in Uruguay he worked in a number of jobs. He at one time worked as a carnival musician playing the drums, violin and the tambourine,[4][5][6] and at another time led the drums corp for carnival comparsa Libertadores de Africa.[7] At various times in his life he also worked as a shoeshiner and as a newspaper salesman.[3][5]

As a teenager Andrade played for Montevideo club Misiones.

In the early 1920s Andrade was signed by Bella Vista, where he played 71 matches and scored seven goals. It was at Bella Vista that he was first selected for the national team.[3][8]

Andrade transferred to Peñarol in 1930 where he played 88 matches over the next few years. He had as a teenager trained with Peñarol but had not been accepted.[10]

From the mid-1930s he played for a number of teams in Argentina including Atlanta, and Lanús-Talleres. He also had a brief stint with Wanderers in Uruguay.

Andrade earned 34 appearances with la Celeste Olimpica scoring one goal between 1923 and 1930.[11]

Andrade won his first Olympic gold medal at the 1924 Olympic football tournament in Paris. He was recognised as being the first black international football player to play Olympic football.[15] He was nicknamed The Black Marvel and The Black Pearl, the latter a name later used in reference to Pelé.[16]

In reaction to the 1924 Olympic win the Uruguayan team were challenged to a two match series by Argentina. In the second match at the Estadio Sportivo Barracas in Buenos Aires Andrade was pelted with stones by the Argentine crowd to which Andrade and the rest of the Uruguayan team responded by throwing the stones back. In the ensuing riot a member of his team was arrested and the Uruguayans refused to play out the remainder of the match.[5]

In 1928 he won his second Olympic gold medal at the 1928 Olympics in Amsterdam. During the semi-final match against Italy Andrade collided with a goal post, seriously injuring an eye. This later deteriorated to the point that he became blind in that eye.[10]

Despite not being at his peak he managed to be one of Uruguay's best players as they won the 1930 World Cup. At the end of the tournament he was selected in the All-Star team.[8][17][18] In 1994 he was selected by France Football as number ten in their World Cup Top-100.[19]

A plaque was placed at the Estadio Centenario in honour of his achievements.[20]

Andrade was also credited with being an intelligent and honest player who never celebrated his goals. He was a dynamic, fast and highly technical player who was able to dominate the pitch without the physicality of many of his team mates.[2][10]

After touring nine European countries with Andrade's Uruguayan club side Nacional, in 1925 attracted a total of over 800,000 spectators. Andrade played half of that tour when he was told by a doctor in Brussels that he had contracted syphilis he disappeared to Paris on hearing the news. Andrade did not return to Montevideo until two months later there a reporter said he had lost weight and seemed in a state of depression, he underwent a course of treatment. Andrade had lost some pace but none of his skill and went on to secure international titles for Uruguay. It was aid he had gone blind in one eye after a semi-final against Italy, Andrade had run into a goalpost and it was speculated, the injury was so serious he was later blinded in one eye. Others said his blindness and deteriorated health was caused by syphilis.

Andrade was a guest at the 1950 FIFA World Cup when Uruguay won their second world championship. His nephew Víctor Rodríguez Andrade, a member of the 1950 team, had adopted Andrade as his second surname in honour of Andrade. In 1956 German journalist, Fritz Hack, searched Montevideo for Andrade for six days, He found him living in terrible conditions in a basement of a flat. Andrade was too intoxicated to understand Hack's questions. Within a year within a year Andrade died, penniless and alcoholic, in an asylum in Montevideo at age 56.[21]