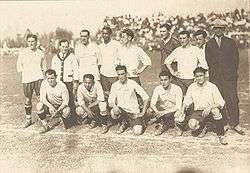 Nasazzi (first from left, at bottom) with the Uruguay team in 1928.

He was born in Bella Vista, Montevideo to Giuseppe, an Italian immigrant from Esino Lario (near Milan), and María Jacinta Yarza from the Basque Country of Spain.[2][3]

Nasazzi is regarded by many as Uruguay's greatest ever football player. He was known as "El Gran Mariscal" (The Great Marshal) and had already won the gold medal at the 1924 and 1928 Olympic Games, as well as the South American Championship in 1923, 1924 and 1926, by the time of the first World Cup. On individual level, he was selected as best player at FIFA World Cup 1930 and twice (1923 & 1935) at South American Championship (the predecessor of Copa America).

During the 1930 FIFA World Cup tournament, Uruguay's only serious rivals were their neighbors Argentina. After defeating Peru and Romania in the first round, Uruguay defeated Yugoslavia 6–1 in the semi-finals to set up a final against Argentina. Although his team were 2–1 behind at half-time, Nasazzi rallied his teammates in the second half, leading them to a 4–2 victory and making himself the first captain to lift the Jules Rimet Trophy.

Although Uruguay refused to defend their title in 1934, Nasazzi won the South American Championship again (in 1935), before retiring in 1937 with 41 international appearances.

Nasazzi's Baton is an unofficial title named after José similar to the Unofficial Football World Championship. It is said to have been held by Uruguay after the first World Cup, and subsequently to have been taken over by any team to beat the holders over 90 minutes in a full international match.[4]