This article is about the men's senior tournament. For the women's tournament, see FIFA Women's World Cup awards.

At the end of each FIFA World Cup final tournament, several awards are attributed to the players and teams which have distinguished from the rest, in different aspects of the game.

There are currently five post-tournament awards, and one given during the tourney:[1]

The Golden Ball award is presented to the best player at each FIFA World Cup finals, with a shortlist drawn up by the FIFA technical committee and the winner voted for by representatives of the media. Those who finish as runners-up in the vote receive the Silver Ball and Bronze Ball awards as the second and third most outstanding players in the tournament respectively. The current award was introduced in the 1982 FIFA World Cup, sponsored by Adidas and France Football , though fifa.com also lists in their player articles as "golden ball winners" Kempes, Cruyff, Pelé, Bobby Charlton and Garrincha for 1978,1974,1970,1966 and 1962 respectively.[3] FC Barcelona is the club with the most players (3) that have won the Golden Ball award (Johan Cruyff - 1974, Romário - 1994, Lionel Messi - 2014).

If there is more than one player with the same amount of goals, since 1994 the tie-breaker goes to the player who has contributed the most assists - with the FIFA Technical Study Group deciding whether an assist is to be counted as such.[8][9] If there is still more than one player, the tie-breaker since 2006 goes to the player who has played the least amount of time.[10]

1 FIFA initially credited Nejedlý with only four goals, which would make him joint top scorer with Angelo Schiavio of Italy and Edmund Conen of Germany. However, FIFA changed it to five goals in November 2006, making Nejedlý the outright top scorer.[18]

2 FIFA initially credited Leônidas with eight goals. However, in November 2006, FIFA confirmed that in the quarter-final tie against Czechoslovakia, he had scored once, not twice as FIFA had originally recorded, meaning he had scored only seven goals in total.[18]

3 There was controversy regarding the number of goals Brazilian Ademir had scored in 1950, as a result of incomplete data concerning the Final Round game Brazil vs. Spain (6–1). The 5–0 goal had been credited to Jair, but is now credited to Ademir[19][20]

4 Salenko is the only player to win the award playing for a team that were eliminated in the group stages. His six goals are the only international goals he ever scored.

5 Despite the assist tiebreaker, Salenko and Stoichkov remained tied with 6 goals and one assist each, and both received the Golden Shoe.[8]

6 Romário and Andersson surpassed the other two players with five goals (Jürgen Klinsmann and Roberto Baggio) by having three assists each.[8][21]

7 Both runners-up had the same number of assists, and each received the Silver Shoe.

8 During the tournament, after the group stage match against Costa Rica, Ronaldo logged a protest against the crediting of a goal as an own goal, and FIFA granted him the change.[22]

9 Eight players had scored three goals. Ronaldo, Crespo and Zinedine Zidane stood out for having one assist, and then the two recipients were determined by less playtime (308 minutes for Crespo, 411 for Ronaldo, 559 for Zidane).[23]

11 Neymar, Lionel Messi and Robin van Persie all had four goals in the tournament. Neymar received the Bronze Boot for playing fewer minutes than his competitors.[25]

The Golden Glove Award is awarded to the best goalkeeper of the tournament. The award was introduced with the name Lev Yashin Award in 1994, in honor of the late Soviet goalkeeper.[5] The FIFA Technical Study Group recognises the top goalkeeper of the tournament based on the player's performance throughout the final competition. Although goalkeepers have this specific award for their position, they are still eligible for the Golden Ball as well, as when Oliver Kahn was awarded in 2002. Although the Golden Glove Award was first awarded in 1994, every All-Star Team in World Cups prior to 1998 but 1990 included only one goalkeeper.

The Yashin Award was first awarded in 1994.

The award was renamed the Golden Glove Award in 2010.

The Best Young Player award was awarded for the first time at the 2006 World Cup in Germany and given to Germany's Lukas Podolski.[26] The award is given to the best player in the tournament who is at most 21 years old. For the 2014 World Cup, this meant that the player had to have been born on or after 1 January 1993. The election took place on FIFA's official World Cup website with the help of The FIFA Technical Study Group.[27]

FIFA organised a survey on the Internet for users to choose the "best young player" of the World Cup, between 1958 and 2002, named the best young player of each tournament.[28] With 61% of the overall vote, the winner was Pelé, who finished ahead of the Peruvian Teófilo Cubillas, the best young player at Mexico 1970, and England's Michael Owen, who reached similar heights at France 98.[29]

The Best Young Player Award was first awarded in 2006.

The FIFA Fair Play Trophy is given to the team with the best record of fair play during the World Cup final tournament since 1970. Only teams that qualified for the second round are considered. The winners of this award earn the FIFA Fair Play Trophy, a diploma, a fair play medal for each player and official, and $50,000 worth of football equipment to be used for youth development.[32]

The appearance of the award was originally a certificate. From 1982 to 1990, it had been a golden trophy based on Sport Billy, a football-playing cartoon character from 1982 who became an icon for FIFA Fair play.[33][34] Ever since 1994, it is simply a trophy with an elegant footballer figure.[35] Peru was the first nation to win the award after receiving no yellow or red cards in the 1970 FIFA World Cup held in Mexico.[36] 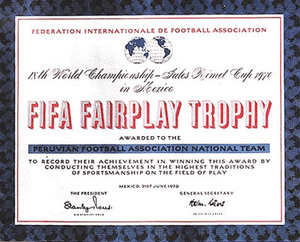 Peru's FIFA Fair Play trophy award. Peru won the award after receiving no yellow or red cards in the tournament.

Man of the Match

The Man of the Match award picks the outstanding player in every game of the tournament since 2002. While the inaugural two editions were chosen by the technical group,[37][38] the Man of the Match is since 2010 picked by an online poll on FIFA's website.[39][40]

The FIFA Award for the Most Entertaining Team was a subjectively awarded prize for the team which had done the most to entertain the public with a positive approach to the game, organised through public participation in a poll.[5] It was awarded between 1994 and 2006.[6]

The All-Star Team is a team of the best performers at the respective World Cup finals. The ways in which the FIFA All-Star team members have been chosen has varied from year to year. A technical study group consisting of journalists - mostly of Europe and South America - and experts has historically chosen the team.[44] However, in 1994 FIFA decided to add an official squad, chosen by the FIFA technical group and under the brand name MasterCard All-Star Team.[45] The All-Star team wound up dropped prior to the 2010 tournament - coincidentally, three years after FIFA changed its sponsorship from MasterCard to Visa.[46]

1 In addition to the 16 of the All-Star Team, 6 reserves were listed:

2 Again there were seven reserves:

In 2010, an equivalent of the All Star Team was an online poll to FIFA.com Club members named "Dream Team", sponsored by Yingli.[50] The Dream Team poll returned the following edition sponsored by Oi.[51]

While FIFA did not release an official list for 2014, official sponsor Castrol published a team of the tournament based on their Castrol Performance Index, which evaluates players' performances through statistical data.[52]

37 different Brazilian players have been named in All-Star teams, Brazil is also the nation with most nominations with 44 nominees. No Brazilian goalkeeper has ever been nominated.

Only two Asian players have been named in All-Star teams, Hong Myung-bo and Yoo Sang-chul of South Korea. Both were selected in 2002.

Similarly, only two African players have been named in All-Star teams, Roger Milla from Cameroon in 1990 and El Hadji Diouf from Senegal in 2002.

Only one player on the victorious 1986 Argentina team, Diego Maradona, was selected in that year's All-Star team.

Uniquely, brothers Brian Laudrup and Michael Laudrup were both selected for the All Star Team from Denmark in 1998.