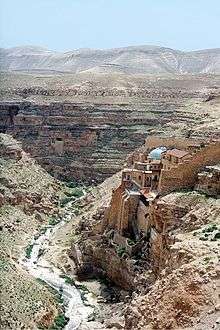 Mar Saba, in the Kidron Valley. 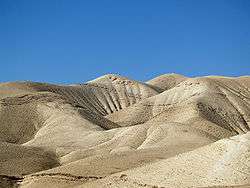 Hills in the Judaean Desert.

The Judaean Desert (Hebrew: מִדְבַּר יְהוּדָה‎‎ Midbar Yehuda, both Desert of Judah or Judaean Desert; Arabic: صحراء يهودا‎‎ Sahara Yahudan) is a desert in Israel and the West Bank that lies east of Jerusalem and descends to the Dead Sea. It stretches from the northeastern Negev to the east of Beit El, and is marked by terraces with escarpments. It ends in a steep escarpment dropping to the Dead Sea and the Jordan Valley. The Judaean Desert is crossed by numerous wadis from northeast to southeast and has many ravines, most of them deep, from 1,200 feet in the west to 600 feet in the east.[1] The Judaean Desert is an area with a special morphological structure along the east of the Judaean Mountains.

The Judaean Desert lies east of Jerusalem and descends to the Dead Sea. Major urban areas in the region include Jerusalem, Bethlehem, the Gush Etzion, Jericho and Hebron.[4]

A study by the Hebrew University of Jerusalem of an underground water reservoir beneath the Judaean Desert known as the Judaea Group Aquifer, found that the aquifer begins in the Judaean Mountains and flows in a northeasterly direction towards the Dead Sea with outflows at the Tsukim, Kane, Samar and Ein-Gedi springs. The rain-fed aquifer contains an average yearly volume of some 100 million cubic meters of water.[5]

Hiking in the Judaean Desert travel guide from Wikivoyage