Julian Alaphilippe (born 11 June 1992 in Saint-Amand-Montrond) is a French road cyclist and cyclocross racer. He currently rides for the team Etixx-Quick Step.[1] He is the brother of racing cyclist Bryan Alaphilippe.[2]

Alaphilippe joined Omega Pharma-Quick Step in 2014. He obtained his first podium on the first stage of the Volta a Catalunya. He also was second in the fifth stage.[1] Alaphilippe scored his first victory as a neo-pro in Stage 4 of Tour de l'Ain where he showed his explosiveness in an uphill finish ahead of Dan Martin.[3] His best World Tour result of the year was a fifth-place finish in the GP Ouest-France. 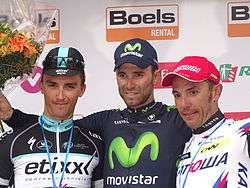 Alaphilippe (left) on the podium of the 2015 Liège–Bastogne–Liège, along with Alejandro Valverde (centre) and Joaquim Rodríguez

2015 was a breakthrough year for Alaphilippe. He acted as a supporter role in the Ardennes classics to help his teammate, the reigning world champion Michał Kwiatkowski, but surprisingly finished 7th in the Amstel Gold Race behind winner Kwiatkowski. In La Flèche Wallonne, his first time participating in the race, he continued to support Kwiatkowski but found his teammate too far behind at a crucial juncture. His team director told him to go for the win and he finished second after three-time winner Alejandro Valverde.[4] The scenario repeated itself at Liège–Bastogne–Liège a few days later when Alaphilippe finished 2nd in his La Doyenne debut, again behind Valverde.[5] In doing so, the 22-year-old realized the best French performance on this classic since 1998, when Laurent Jalabert finished second.[6]

After those performances and a string of podium finishes in the Tour de Romandie, Alaphilippe was, on May 4, granted a contract extension for two more years, until the end of 2017.[7] Later in the month he won the queen stage of the Tour of California and took over the lead in the general classification, 2 seconds ahead of Peter Sagan.[8] However, he lost the overall eventually to Sagan by just 3 seconds in the last stage due to the time bonuses in a flat sprint.[9] In the later part of the summer, he finished eighth in the Clásica de San Sebastián, finishing in the lead group behind the winner, Adam Yates. He subsequently finished tenth overall in the Eneco Tour, which included a stage that used many of the Ardennes classics roads.[10] His form was dropped significantly near the end of the year, including a DNF in the Road World Championships. He was later diagnosed with mononucleosis. The disease led to extreme fatigue, rendering him unable to maintain his top performance and marking the end of his season.[11]

In April, Alaphilippe placed 2nd at the La Flèche Wallonne for the second year in a row. He then earned his biggest victory so far at the Tour of California, when he won a stage and the overall. The lead was taken on stage 3 when he attacked on an HC climb with less than one kilometer left. His form continued in Critérium du Dauphiné which he finished 6th overall and 1st in the young rider classification. It was also his first white jersey in UCI World Tour races.[12] In late June, he was named in the start list for the Tour de France.[13] During the Tour de France, he held the young rider classification from stages 2–6 and won the combativity award on stage 16.

Alaphilippe was selected to represent his nation at the Olympics men's road race and Olympic men's road time trial.[14] During the road race and being one of the pre-race favorites, he caught up with the leading group of cyclists on the final climb of Vista Chinesa, but his crash on the descent hindered him from joining the final attack launched by Greg Van Avermaet and Jakob Fuglsang to catch the sole leader Rafał Majka before the finish line. Alaphilippe eventually finished the road race in fourth position, 22 seconds behind the winner Van Avermaet.[15][16]Alaphilippe finished in 32nd position in the Olympic men's road time trial.

This chart shows Alaphilippe progress in five monuments and the classics he mostly participated in.