Tony Martin (born 23 April 1985) is a German professional road bicycle racer riding for the UCI ProTeam Etixx–Quick-Step.[3] Martin is known as a time trial specialist, and is a four-time world champion in the discipline, having won the title in 2011, 2012, 2013 and 2016. He also won a silver medal at the 2012 Summer Olympics in London, finishing runner-up to Sir Bradley Wiggins in the event.

Born in Cottbus, East Germany, Martin and the rest of his family escaped from East Germany shortly before the fall of the Berlin Wall and the collapse of communist Eastern Europe. Later, he returned to the Eastern part of Germany to attend sport school in Erfurt. 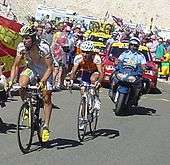 In 2009, Martin won time-trials in Critérium International and Bayern-Rundfahrt. He also featured strongly in week-long stage races, winning the mountain classifications at 2009 Paris-Nice and the 2009 Tour de Suisse, finishing second overall and winning a stage in the latter. Martin also made an impact at the Tour de France, wearing the Maillot blanc on stages 3–14, and winning the combativity award after finishing second on Stage 20 at the top of Mont Ventoux. He took the bronze medal in the time trial at the 2009 UCI Road World Championships at the end of the season.

Martin enjoyed more success in time trials, winning the national championships as well as stages in the Tour of California and the Tour de Suisse. Martin finished second in both the prologue and ITT Stage 19 of the Tour de France, and again wore the Maillot blanc (stages 1–3). Following the Tour de France, Martin finished 1st overall in the 2010 Eneco Tour, as well as the time trial stage 7 and the young rider's classification. Martin again took the bronze medal at the time trial at the 2010 UCI Road World Championships.

Martin in the rainbow jersey after winning the time trial at the 2011 road world championships.

2011 saw Martin claim overall victories in the 2011 Volta ao Algarve and 2011 Paris-Nice,[4] having won time trials in both events. He also finished second overall in the 2011 Tour de Romandie, and won the time trial in the 2011 Critérium du Dauphiné.

In September, Martin won the gold medal in the time trial at the 2011 UCI Road World Championships in Copenhagen, Denmark.[7] He then won the opening time trial of the inaugural 2011 Tour of Beijing,[8] and held the race lead for the rest of the event to claim overall victory.[9][10]

Following the announcement that HTC–Highroad would fold at the end of 2011, Martin signed with Omega Pharma–Quick-Step for the 2012 season.[11] 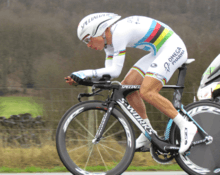 Martin at the 2012 Paris–Nice wearing the rainbow jersey skinsuit.

Martin began 2012 with second overall in the Volta ao Algarve, finishing second to Bradley Wiggins by less than a second in the final time trial. In April, Martin lost consciousness after colliding with a car during training[12] and sustained injuries, wrecking his early season. Martin returned to action at the Tour of Belgium in May, winning the time trial on Stage 4 and taking the overall victory.

At the 2012 Tour de France, Martin's hopes of winning the prologue, were dashed by a mechanical problem that forced him to switch bikes on course. Martin then crashed the following day on Stage 1, suffering a broken wrist. After suffering more mechanical problems in the next time trial, Stage 9, he withdrew from the competition so that his wrist would have more time to heal before the time trial at the 2012 Summer Olympics three weeks later.[13] Martin was deemed fit enough to compete, and he claimed silver at the Olympics behind Bradley Wiggins.[14]

In October, Martin went back to China to defend his title of Tour of Beijing champion, the last UCI World Tour race of the season. He accomplished his mission successfully, raking in the general classification when the dust settled.[15] He placed well in all the stages, but the win is to be attributed in large part to a solo victory on stage 2, where he decimated the field, won well clear of his nearest opponents and took his first stage (that is not a time trial) win in three years.[16] 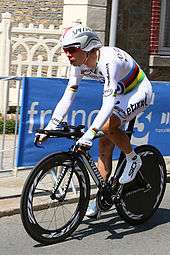 In February, Martin won the general classification of the Volta ao Algarve. He earned the leader's jersey on the fourth and last stage, a 34.8 km (21.6 mi) race against the clock which he dominated. The second rider of the day, Michał Kwiatkowski (Omega Pharma–Quick-Step), finished with a deficit of a little more than a minute. In the overall classification, he bested Kwiatkowski and Lieuwe Westra of Vacansoleil–DCM.[17] In the Tour de France he was involved in a crash on the 1st stage which left him with a concussion and a contusion on his left lung.[18] He recovered enough to win stage 11, an individual time trial.[19] With an average speed of 54.271 km/h (33.722 mph), Martin rode the third fastest ever ITT in the Tour.[20]

Bradley Wiggins, Martin and Fabian Cancellara on the podium after winning the time trial at the 2013 road world championships

In the sixth stage of Vuelta a España, Martin managed a 175 km (109 mi) solo breakaway, averaging 27.7 mph for over 100 miles (quite possibly — by a large margin — the fastest ever 100 mile solo standard road bicycle ride in history) which was only caught in the final meters of the stage.[21][22] This stage was ridden on a road bike, forming part of his preparation for the world championships. Martin would then go on to help his team Omega Pharma–Quick-Step to narrowly beat Orica–GreenEDGE in world team time trial championships before emerging victorious once more in the individual time trial, beating second placed Wiggins by 46 seconds, who was a further two seconds ahead of four-time winner Cancellara.[23]

In the off season, Martin had surgery in Hamburg to resolve the scaphoid non-union resulting from his 2012 Tour de France stage 1 crash.[24] The Omega Pharma-Quick Step team said he would wear a special cast for six weeks which would allow him to resume training before the cast was removed.

On the 1st of May, he claimed his third consecutive Tour of Belgium and set a new record in doing so. 9 other riders managed to win the race two times before. Martin then won the two time trials of the Tour de Suisse, finishing fourth overall thanks to his ability to limit his losses in the mountains.[25] On 13 July 2014, Martin won his first mass start road stage of the Tour de France. He was in a breakaway for 155 km, the final 60 km in a solo effort to bring back memories of his famous Vuelta effort in 2013.[26] This time Martin won the stage and was able to begin his celebrations some distance before the line. He topped his Tour off by winning the 20th stage time trial by the margin of 1 minute 39 seconds over his nearest rival.[27] He went on to take another Grand Tour stage win at the Vuelta a España, clinching the individual time trial on stage 10.[28] However he missed out on victory in the time trials at the Road World Championships, taking the bronze alongside his Omega Pharma-Quick Step team-mates in the team event and the silver in the individual, trailing Bradley Wiggins by 26 seconds.[29] 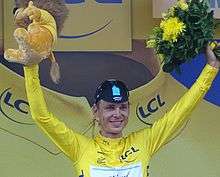 Martin was awarded the leader's yellow jersey after stage four of the 2015 Tour de France.

Martin had his first victory of the season on the individual time trial of the Volta ao Algarve. The second one came in May, at the Tour de Romandie, where he bettered Simon Spilak by eleven seconds in the rainy streets of Lausanne.[30] At the end of June, he defended his German individual time trial title successfully.[31]

At the 2015 Tour de France, Martin finished second behind Rohan Dennis (BMC) in the opening time trial in Utrecht. Martin looked set to take the yellow jersey on Stage 2 when Dennis was dropped when the peloton split in cross winds, but Fabian Cancellara outsprinted Martin's teammate Mark Cavendish to take third on the stage, and jump ahead of Martin into first place due to time bonuses. On Stage 3, Cancellara was involved in a large accident and lost time, but Martin again missed out on taking the yellow jersey, as Chris Froome (Team Sky) came home second at the finish on the Mur de Huy, and took the lead by one second over Martin due to the time bonus. On July 7, 2015, Martin won Stage 4 of the Tour after a short escape 3 km (1.9 mi) before the finish, taking the yellow jersey for the first time in his career. He was riding on a bike borrowed from teammate Matteo Trentin, having had mechanical problems earlier in the race, which featured 13 km (8.1 mi) of cobbles.[32] On Stage 6, Martin crashed in the final kilometre on an uphill section while he was still in yellow and had to abandon the Tour because of a broken collarbone.[33]

One month later, Martin returned to racing with style. Although he fell short in the individual time trial in stage 4, he gained time over his main competitors and eventually won the overall of Tour du Poitou-Charentes.[34] This was Martin's first stage race win of the season. However he missed out on a World Championship gold for the second year running, with Etixx-Quick Step finishing second after being defeated by BMC by 11 seconds in the team time trial[35] and Martin struggling to a seventh place in the individual event - his worst performance in the event since he finished in the same position at the 2008 Worlds.[36]

Tour of the Basque Country