Justin Irvin Upton (born August 25, 1987) is an American professional baseball outfielder for the Detroit Tigers of Major League Baseball (MLB). He previously played for the Arizona Diamondbacks from 2007 to 2012, Atlanta Braves in 2013 and 2014 and the San Diego Padres in 2015. He has been a teammate of his brother Melvin Upton, Jr. with both the Braves and the Padres. While primarily a right fielder throughout his career, Upton has since transitioned to left field for the Braves and Padres.

Upton was selected first overall by the Diamondbacks in the 2005 MLB Draft out of high school and made his MLB debut with them in 2007. He has been selected to three All-Star teams and has won two Silver Slugger Awards. Justin and Melvin are the only brothers in Major League Baseball to ever be selected in the number one and two slots of any first round draft.

Upton was an all-district shortstop for Great Bridge High School in Chesapeake, Virginia, and won the AFLAC National High School Player of the Year Award.

The Arizona Diamondbacks selected Upton with the first overall selection in the 2005 MLB Draft. 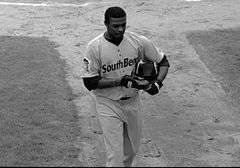 Justin Upton with the South Bend Silver Hawks in 2006

In his first professional season he played for the Class-A South Bend Silver Hawks. He began 2007 with the Class-A Advanced Visalia Oaks, but was promoted to the AA Mobile BayBears after hitting .341 with 5 home runs for the Oaks in April.

On August 2, 2007, Upton was called up to the big league team at the age of only 19, following an injury to everyday right fielder Carlos Quentin. When he was called up, the Diamondbacks had star rookie Chris Young at center field, so Upton shifted to right.

He finished his rookie campaign with 2 home runs, 11 RBIs, 2 stolen bases, and a .221 batting average. Despite a relatively disappointing start to his career (albeit with limited playing time), he broke out in the 2007 post-season, leading the Diamondbacks to a three-game sweep of the Chicago Cubs, making it to the NLCS. He finished the 2007 post-season with an impressive .357 batting average, a double, a triple, a stolen base, and an RBI to go along with an impressive .571 slugging percentage.[2] 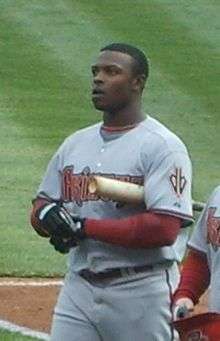 Upton during his tenure with the Arizona Diamondbacks in 2008

In 2008 spring training, Upton hit over .300 with three home runs, 12 RBIs, and four stolen bases, earning the starting right field job over Jeff Salazar. Manager Bob Melvin said that Upton has a "very high ceiling," and that it "wouldn't surprise him" if he had a great 2008 season.[3]

Upton began the season and held the current title of being the youngest active major leaguer second to Clayton Kershaw as of July 31, 2008. Upton collected his first big hit of the 2008 major league season on April 3. In the sixth inning of a game against the Cincinnati Reds, he broke up a no-hitter in the major league debut of Johnny Cueto with a home run. It was Arizona's only hit of the contest. The next night (April 4), he went 3 for 5 against the Colorado Rockies in their home opener with his second home run of the season. For the third consecutive ballgame on April 5, Upton homered while collecting three hits in a 7–2 Arizona victory. His third home run made him only the third player ever under the age of 21 to hit home runs in three straight games. On April 11, Upton homered off Jeff Francis of Colorado for his fourth home run of 2008 campaign. The home run was in an 8–2 victory that was the seventh straight for Arizona. The very next day (April 12), he and Arizona continued their streaks, with Upton going 3 for 3, hitting a three-run home run to dead center field at Chase Field and the Diamondbacks winning 10–3, marking their eighth straight win. Upton had a career-high four RBIs on the day.

Upton went through a prolonged slump in the month of May that saw him go 0 for 24 with 17 Ks at one point. Upton came out of his slump on May 30 with a home run against the Giants.

Despite getting off to a hot start on the year, cold streaks and a left oblique injury (which resulted in a five-week stint on the DL) ruined chances of Upton putting together a great year. However, he finished the year with respectable numbers for a 20-year-old, finishing the year with 15 home runs, 42 RBIs, 6 triples, 19 doubles, a stolen base, and a .463 slugging percentage to go along with a .250 batting average.[4] On defense, he led tied for the lead among all major league outfielders in errors, with 11.[5] On defense, in 2010 he led all major league outfielders in errors, with 10.[6]

Upton got off to a terrible start to the 2009 season, having just one hit in his first 21 at-bats (and not getting a hit until April 14, the sixth game of the year). He finished April with a .250 batting average with just 2 home runs and 8 RBIs.

It was in May, however where Upton turned his season around, putting up 7 home runs, 21 RBIs, 8 doubles, 4 triples, a league-leading .709 slugging percentage, to go along with a .373 batting average and a .444 on-base percentage. On June 2, 2009, Upton was named NL Player of the Month of May by the MLB for his great month. His brother Melvin Upton, Jr. earned AL Player of the Month of June, making Justin and B.J. the first pair of brothers to win player of the month honors in the same year.

On July 5, Upton was named to the 2009 All-Star team as a reserve outfielder for the National League.

As of October 10, 2009, Upton led the Diamondbacks in batting average (.300) and hits (158) to go along with 26 home runs (including his first career grand slam on 6/2/09 against the Dodgers) and 86 RBI. He's also thirteenth in the NL in slugging percentage (.532, third among outfielders) and has compiled 20 stolen bases to go along with 7 triples and 30 doubles. On August 5, 2009 against the Pittsburgh Pirates, Upton strained his right oblique trying to steal second base, resulting in a stint on the disabled list. Rookie outfielder Trent Oeltjen had taken over his spot on the roster.[7]

On September 1, 2009, against the Colorado Rockies, Upton was taken out in the top of the third inning after hitting a 420-foot (130 m) single in his previous at-bat. Thinking the ball to be a home run, he did not hustle to first base, and when the ball short-hopped the wall, he was forced to stay on first base.

Upton's season was cut short for the second straight season by a strained right oblique, but he still finished the season with a respectable .273 batting average, 17 home runs, and 69 runs driven in to go along with 18 stolen bases.[11]

Upton was selected to be an all-star in his hometown stadium for the second time in his career, along with his teammate, Miguel Montero.[12]

He came in fourth in the voting for the 2011 National League Most Valuable Player Award, behind winner Ryan Braun, Matt Kemp, and Prince Fielder.[17]

After the 2012 season, Upton rejected a trade to the Seattle Mariners.[18]

On January 20, 2013, the Arizona Diamondbacks completed a trade with the Atlanta Braves that sent Upton and Chris Johnson to the Braves in exchange for Martin Prado, Randall Delgado, shortstop prospect Nick Ahmed, pitching prospect Zeke Spruill, and minor league first baseman Brandon Drury.[19] The trade allowed Upton to play with his brother Melvin, who had signed with Atlanta earlier in the offseason.[20] He and his brother hit back to back home runs on April 23, 2013 against the Colorado Rockies, marking the first time that brothers hit back to back home runs since 1938. The First time Melvin and Justin homered in the same game was April 7, 2013 when Melvin Upton hit a game-tying home run off Carlos Marmol in the 9th inning and Justin Upton hit a game-winning home run (also off Marmol in the 9th inning) to lead the Braves a 6-5 victory over the Cubs. [21]

On August 8, Justin and Melvin homered in the same game for the fifth time, setting a new Major League record for brothers. The Uptons previously shared the record of four with two pairs of brothers: Vladimir and Wilton Guerrero, and Jason and Jeremy Giambi.[22] 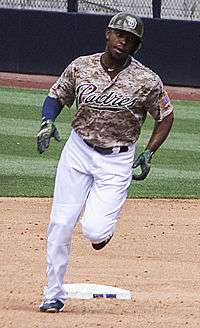 Upton playing for the San Diego Padres in 2015

On December 19, 2014, the Braves traded Upton and Aaron Northcraft to the San Diego Padres in exchange for Max Fried, Jace Peterson, Dustin Peterson, and Mallex Smith.[23][24]

On January 20, 2016, the Detroit Tigers signed Upton to a six-year, $132.75 million contract. The contract includes an option for Upton to pursue free agency again after two years.[28][29] Upton hit his 200th career home run on July 18, 2016 off Minnesota Twins starter Ricky Nolasco, accounting for the only run in a 1–0 Tigers victory.[30]

Upton was named co-American League Player of the Week for the week of September 19-25 (sharing the honor with Carlos Santana of the Cleveland Indians). Upton was 10-for-25 (.400) with three doubles, three home runs, six RBI and an AL-leading 22 total bases. It was his first Player of the Week award in the American League and fourth overall, having last won the NL award on April 13, 2014 with the Atlanta Braves.[31]