Kenitra (Moroccan Arabic: قْنيطره‎, Qniṭra; Arabic: القنيطرة‎‎, al-Qonayṭéra, the little bridge) is a city in northern Morocco, formerly (1932–1956) known as Port Lyautey. It is a port on the Sbu river, has a population in 2014 of 431,282,[1] is one of the three main cities of the Rabat-Salé-Kénitra region and the Chef-lieu of the Province of Kénitra. During the Cold War Kenitra's U.S. Naval Air Facility served as a stopping point in North Africa.

The history of the city begins with the foundation of a trading-post by the Phoenicians, known back then as Thamusida. Under the Antonine dynasty, a Venus temple was built there.

Before the French protectorate, there was only a kasbah in the area where the modern city can today be found.

French Protectorate and modern of times

General Lyautey restored peace and order to the country after crushing the tribal uprising. After safely moving the Sultan from Fez to the current capital city, Rabat, Lyautey began his task of civilian administration.

One of the first preoccupations of General Lyautey was to build ports along the inhabitable Atlantic coast where there were no natural harbors. He established Kenitra in 1912 as a French military fort and town. The port at Kenitra, at the mouth of the Sebou river, was opened in 1913.[2] It soon became the best river port in Morocco.[3] Kenitra draws its name from a culvert built at Fouarat lake upstream of the kasbah. This culvert was destroyed in 1928. In 1933, the French officially named the locale "Port Lyautey".

It was renamed "Kenitra" in 1956 as Morocco gained its independence. Kenitra has grown rapidly to be a shipping centre for agricultural produce (mainly fruit), fish, timber, and lead and zinc ores. The city’s industrial area lies upstream of the port.

Air base of Kenitra: Public works and maintenance department

In November 1942, after Operation Torch, the Americans captured the Port Lyautey French fighter base as a military base, named Craw Field. The Navy ran the base until 1947, when the State Department negotiated reversion of control to France. In 1950, a $23,000,000 expansion was authorized, but then the Korean War diverted resources. In the 1950s, nearly 10,000 persons were on the base making it the largest aggregation of Americans in any one overseas base outside Japan. Later, the base at Kenitra was expanded to become a U.S. Naval Air Station.[4]

The base was shared by both the USA and Morocco through the Cold War. A small Navy communications out-station at Sidi Yahia closed in the late 1970s. The Air Station was closed in 1991. 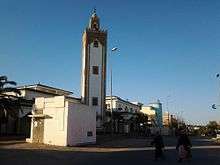 The National Route 1 and the A1 motorway pass through Kenitra and connect it to Rabat-Salé in the south-west and to Larache in the north-east.

The city is served by two railway stations: Kenitra-Ville and Kenitra-Medina. A shuttle train, TNR, connects the city, every 30 minutes, to Rabat and Casablanca.

In 1938, a group of Kenitra natives created KAC. This group of soccer lovers wanted to resist French domination in sports in Morocco. The team, made entirely of Kenitra natives, succeeded in reaching the premier Moroccan soccer league in 1956. In 1960, KAC won its first championship league of Morocco. KAC embarked in a journey of glories by winning the 1973-81-82 championship leagues and the 1961 throne cup. Ahmed Souiri was a long-time manager and coach. KAC has produced many international players. Bouliahiaoui and Khalifa were among the players who helped the Moroccan national soccer team qualify for the second round of the World Cup finals in Mexico in 1986. Mohammed Boussati still holds a national record of goals by scoring 25 goals in one soccer championship season in 1981-82. Its home is the Kenitra Municipal Stadium which has a capacity of 15,000 people.[8]

Kenitra was the birthplace of: