Salé (Arabic: سلا‎‎ Sala, Berber ⵙⵍⴰ Sla) is a city in north-western Morocco, on the right bank of the Bou Regreg river, opposite the national capital Rabat, for which it serves as a commuter town. Founded in about 1030 by Arabic-speaking Berbers, the Banu Ifran,[3] it later became a haven for pirates as an independent republic before being incorporated into Alaouite Morocco.

The city's name is sometimes transliterated as Salli or Sallee. The National Route 6 connects it to Fez and Meknes in the east and the N1 to Kénitra in the north-east. Its population is approximately 900,000.[2] 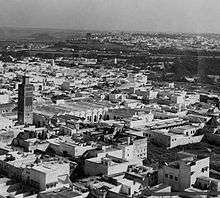 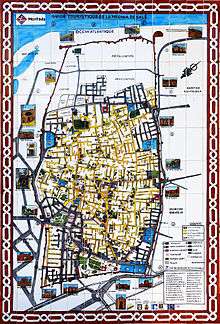 The Phoenicians established a settlement called Sala,[4][5] later the site of a Roman colony, Sala Colonia, on the south side of the Bou Regreg estuary.[6] It is sometimes confused with Salé, on the opposite north bank. Salé was founded in about 1030 by Arabic-speaking Berbers[7] who apparently cultivated the legend that the name was derived from that of Salah, son of Ham, son of Noah.[8]

The Banu Ifran Berber dynasty began construction of a mosque about the time the city was founded.[9] The present-day Great Mosque of Salé was built during the 12th-century reign of the Almohad sultan Abu Yaqub Yusuf,[10] although not completed until 1196.[11] During the 17th century, Rabat was known as New Salé, or Salé la neuve (in French), as it expanded beyond the ancient city walls to include the Chellah, which had become a fortified royal necropolis under the rule of Abu Yaqub Yusuf's son, Abu Yusuf Yaqub al-Mansur.[12]

In September 1260, Salé was raided and occupied by warriors sent in a fleet of ships by King Alfonso X of Castile.[13][14]

In the 17th century, Salé became a haven for the Barbary pirates, among them Moriscos turned corsair, who even formed a Republic of Salé.[15] Salé pirates (the well-known "Salé Rovers")[16] roamed the seas, and cruised the shipping routes between Atlantic colonial ports and Europe, seizing American and European ships[17] and selling their crews into slavery.[18] Despite the legendary reputation of the Salé corsairs, their ships were actually based across the river in Rabat, called "New Salé" by the English.[19][20]

The city of Salé was bombarded by the French Admiral Isaac de Razilly on 20 July 1629 with a fleet composed of the ships Licorne, Saint-Louis, Griffon, Catherine, Hambourg, Sainte-Anne, Saint-Jean; 3 corsair ships were destroyed .[21][22]

During the decades preceding the independence of Morocco, the city was the stronghold of some "national movement" activists. The reading of the "Latif" (a politically charged prayer to God, read in mosques in loud unison) was launched in Salé and relayed in some cities of Morocco.

In 1851, Salé was bombarded in retaliation for piracy being practiced by Moroccan ships against European traders.[23]

A petition against the so-called "Berber Dahir" (a decree that allowed some Berber-speaking areas of Morocco to continue using Berber Law, as opposed to Sharia Law) was given to Sultan Mohamed V and the Resident General of France. The petition and the "Latif" prayer led to the withdrawal and adjustment of the so-called "Berber Decree" of May 1930. The activists that opposed the "Berber Decree" apparently had a fear that the explicit recognition of the Berber Customary Law (a very secular-minded Berber tradition) would threaten the position of Islam and its Sharia law system. Others saw in opposing the French-engineered "Berber Decree" as a means to turn the table against the French occupation of Morocco.

The widespread storm that was created by the "Berber Dahir" controversy created a somewhat popular Moroccan nationalist elite based in Salé and Fez with strong anti-Berber, anti-West, anti-secularism, and with strong Arab-Islamic inclinations. That episode of Moroccan history was the basis of some of the political awareness that would lead fourteen years later the signing of the Manifest of Independence of Morocco on 11 January 1944 by many "Slawi" activists and leaders. Salé has also been deemed to have been the stronghold of the Moroccan left for many decades, where many leaders have resided.

Salé has played a rich and important part in Moroccan history. The first demonstrations for independence against the French, for example, sparked off in Salé. A good number of government officials, decision makers and royal advisers of Morocco were born in Salé. Salé people, the Slawis, have always had a "tribal" sense of belonging, a sense of pride that developed into a feeling of superiority towards the "berranis", i.e. Outsiders.

The prefecture is divided administratively into the following:[2]

Recent developments, including the new bridge connecting to Rabat, the new Rabat-Salé tramway, marina and coastal development demonstrate government investment. Private development companies such as Emaar Properties are also investing in the area. High unemployment used to be a serious issue to the Salé area, with the numerous textile factories located in this area being the only real source of work, this is recently diversing into other areas such as international call centres, electronics and recently a new "techno park" was opened, which was modeled on the Casablanca techno centre success.

Water supply and wastewater collection in Salé was irregular, with poorer and illegal housing units suffering the highest costs and most acute scarcities.[24] Much of the city used to rely upon communal standpipes, which were often shut down, depriving some neighbourhoods of safe drinking water[24] for indefinite periods of time. Nevertheless, Salé fared better than inland Moroccan locations, where water scarcity was even more acute.[24] Improvements from the government, local businesses and the water distribution companies of Regie de distribution d'Eau & d'Electricite de Rabat-Salé (REDAL) as of 2010 have meant that this situation has improved drastically.[25]

The A.S.S. is the football club of the city, and the president is Abderrahmane Chokri.

The film Black Hawk Down was partially filmed in Salé, in particular the wide angle aerial shots with helicopters flying down the coastline.

The character Robinson Crusoe, in Daniel Defoe's novel by the same name, spends time in captivity of the local pirates, the Salé Rovers, and at last sails off to liberty from the mouth of the Salé river.

Anarchist infocentrum in Prague is named after Republic of Salé pirates.[26]