For the ethnic group from Myanmar, see Kayan people (Burma). 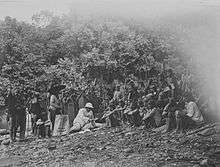 A European man discussing with the leaders of the Kayan people in Sarawak, circa 1900 to 1940.

A Kayan using rattan to "saw" a piece of firewood.

Being an indigenous tribe in central Borneo, the Kayan people are similar to their neighbours, the Kenyah tribe, with which they are grouped together under the Bahau ethnic group.

The population of the Kayan ethnic group may be some 27,000.[2] They are part of a larger grouping of people referred to collectively as the Orang Ulu, or upriver people. Like some other Dayak people they are known for being fierce warriors, former headhunters, adept in dry-rice cultivation, and having extensive tattoos and stretched earlobes amongst both sexes.

They may have originated from along the Kayan river in the North Kalimantan province of Borneo. They live along the upper Kayan and the middle Kapuas and Mahakam rivers. They seem to have expanded to the south in Sarawak in historic times, generating some conflicts with the Iban that were expanding north at the same time. They have settled in Sarawak on the middle Baram River, the Bintulu River and along the Rajang River, having been pressed back a little during the late 19th century. In 1863 West Kalimantan, Iban people migrated to the upstreams of Saribas River and Rejang River and started to attack the Kayan people in those areas and continued doing so northwards and later eastwards. Wars and headhunting attacks have caused many other tribes to be displaced, including the Kayan people, who make up of 1.4% of the West Kutai Regency population.[3] Significant expansion to the east Borneo also occurred during the historical times, the conversion of the Kayan tribe to Islam forming the ethnogenesis of the Bulungan people.

Their language belongs to the Malayo-Polynesian branch of the Austronesian language family.

Their basic culture is similar to the other Dayak people of Borneo. Traditionally they live in long houses on river banks. Their agriculture was based upon shifting cultivation techniques and the cultivation of dryland rice. They also cultivate sago, and go hunting and fishing. They are known for good carvings and metalwork.