The Tamil Malaysians resp. Malaysian Tamils consists of people of full or partial Tamil descent who were born in or immigrated to Malaysia. They make up over 90% of the Malaysian Indian populations in Malaysia. Although bulk of the migration happened during the British colonial period there were established Tamil communities spanning a millennium.[1][2]

The relation between Tamils and Malaysia is older than 2000 years. The ancient Tamil literature Paṭṭiṉappālai refers today's Malaysia as Kaalagam (Tamil: காழகம்).[3][4]

Prior to British colonization, Tamils had been conspicuous in the archipelago much earlier, especially since the period of the powerful South India kingdom of the Cholas in the 11th century. The Pallava dynasty of Tamil Nadu spread Indian culture and the Indian script to Malaysia.[5] The Tamil emperor Rajendra Chola I of the Chola dynasty invaded Malaysia in the 11th century.[6]

The Malay Peninsula experienced strong south Indian culture in the 11th century and south Indian merchant guilds were established in several locations.[7] By that time, Tamils were among the important trading peoples of maritime Asia. Although bulk of these immigrants to South East Asia had assimilated with the majority Malay ethnic group, some communities such as the Malacca Chittys are remnants of the earlier migration history.[8]

During the British colonial era, Britain facilitated the migration of Indian workers to work in plantations. The overwhelming majority of migrants from India were ethnic Tamil and from the Madras Presidency of British.

The Sri Lankan Tamils, also known locally as Ceylonese Tamils, were employed principally in the civil and professional services. 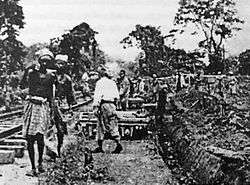 Malaysian Tamils during the construction of Death railway between June 1942 to October 1943
Main article: Burma_Railway

During the WWII Japanese army used more than 120,000 Tamils in the construction of 415 KM railway between Siam and Burma to transport them army supplies. During this project half of them (around 60,000) were perished.

The recent research reveals that close to 150,000 Tamils perished during the project. The fell victim to snakes and insects, cholera, malaria and Beriberi. Some of them committed suicide, unable to bear the burden and the Japanese torture. [10]

Tamil is an educational language in Malaysia, with more than 500 Tamil medium schools. According to Harold Schiffman, an American researcher into Malaysian Tamils, compared to Singapore, language maintenance is favorable in Malaysia. However, he notes some Tamils are shifting to English and Malay.[11] Although most Tamil students still go to publicly funded schools that teach primary subjects in Tamil language there are moves to shift to Malay language. Tamil groups have seriously objected to this policy.[12]

Malaysian Tamils have had an opportunity to integrate with the expanding economy of Malaysia since 1970 under the New Economic Policy (NEP). Although the bulk of them still remain as workers in the plantation sector in rubber and palm oil estates at those times very many have moved out as blue collar and white collar workers in the expanding industrial sector. They are also found in civil service, professional sector, media and finance. One of Malaysia's wealthiest men Ananda Krishnan is a Malaysian Tamil of Sri Lankan origin. Overall it is one of the dynamic communities compared to other Indian diaspora groups such as in Fiji, Guyana and Trinidad and Tobago.[1]

The Malaysian political process is based on a cooperative political alliance of three major political parties, each representing an ethnic community. Malaysian Indian Congress (MIC) represents the interests of the Malaysian Indian community at the federal level. Due to overwhelming natural presence, Malaysian Tamils have come to dominate the MIC since its inception. Samy Vellu, who is the longest serving leader of a mainstream Malaysian political party, having been MIC president since October 12, 1979 is a Malaysian Tamil, as are many of the office bearers of the party. In recent times the underclass of the Indian community have been galvanized by the Hindu Rights Action Force (HINDRAF) to fight for their rights. HINDRAF was classified as an illegal organization on 15 October 2008 and most of its top leaders have been detained under the Internal Security Act (ISA).