Eastern Kentucky University, commonly referred to as Eastern or by the acronym EKU, is an undergraduate and graduate teaching and research institution located in Richmond, Kentucky, United States. EKU is accredited by the Southern Association of Colleges and Schools (SACS).[7] It maintains six regional campuses in Corbin, Hazard, Somerset, Danville, Lancaster,and Manchester; and offers more than 40 online undergraduate and graduate options.[8][9]

Central University was founded in 1874 on the present site of Eastern Kentucky University. In 1901, beset with financial difficulties and small enrollment, Central University agreed to consolidation with Centre College. The Kentucky General Assembly of 1906 enacted legislation establishing the Eastern Kentucky State Normal School No. 1. The legislation was signed into law by the governor on March 21, 1906. On May 7, 1906, the Normal School Commission selected the site of the former Central University campus to be the location of the new school. In 1922 it became a four-year institution and changed its name to the Eastern Kentucky State Normal School and Teachers College, awarding its first degrees under that name in 1925. The school received accreditation from the Southern Association of Colleges and Schools in 1928; then, two years later, in 1930, it changed its name again to the Eastern Kentucky State Teachers College. Eastern added graduate studies in 1935, and thirteen years later, in 1948, the General Assembly removed the word Teachers from the school's name, and granted it the right to award nonprofessional degrees. It was not until 1966 that the school was officially renamed Eastern Kentucky University. In 2010, the university awarded its first doctoral degree—in Educational Leadership and Policy Studies.[1][10] EKU continues to serve its service region by offering adult degree completion options and online degree programs in addition to its traditional on-campus offerings.[9][11]

Eastern comprises five academic colleges, The Graduate School, as well as the John Grant Crabbe Library, and offers more than 160 degree programs at the associate, baccalaureate, master's and doctoral levels.[3]

EKU is the only college or university nationwide that can claim all the following "Points of Pride": 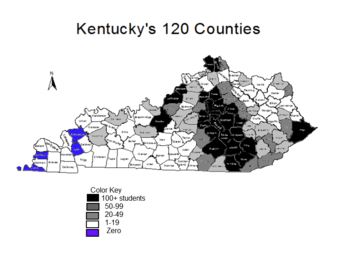 Referred to as the "Maroons" until the mid-1960s, Eastern's sports teams are known as the "Colonels." They compete in the NCAA's Division I (Football Championship Subdivision in football) in the Ohio Valley Conference.

The school is best known for its Football Championship Subdivision football team, which has captured 22 OVC conference titles and two Division I-AA National Championships in 1979 and 1982. Much of the success came during the long tenure of head coach Roy Kidd from 1964 to 2002. Kidd, with a career coaching record of 314-124-8, is a member of the College Football Hall of Fame. Now led by first-year coach Mark Elder, the Colonels returned to the national FCS playoffs in 2011.

The EKU men's basketball team won the Ohio Valley Conference tournament championship and its automatic bid to the NCAA basketball tournament in 2005, 2007, and 2014.

More than 150 Registered Student Organizations are active on campus, including Greek chapters, political organizations, Student Government Association, and dozens of others. Organizations as diverse as the EKU BassMasters, EKU Kendo Club and the EKU Anime Club routinely hold events, programs, and fundraisers. 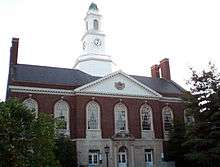 Eastern also has many traditions associated with its student life. Amongst others, "Powell Corner" is a common area bordered by the Powell Student Center, the Keen Johnson Building and Case Residence Hall where students have gathered in between classes for decades. Formerly known as "Horny Corner" and still called so by alumni for the flirtatious conversations that often occur there, The Corner has remained a central gathering spot throughout Eastern's history. Typically, one wishing to get the attention of the student body as a whole will turn towards The Corner to hang a home-made banner from the rails of the Powell Student Center, decorate the area with side walk chalk, or even stand atop one of the many benches or a planter box to exclaim their message.

Mozart's Grave is the tomb of Eastern's unofficial campus mascot from the mid-1960s, and is marked with a gravestone located behind the amphitheater stage in an area of campus known as The Ravine. A mutt who used to roam campus freely, Mozart was a beloved campus pet and could often be found sleeping under the desk of then-president Robert Martin or lying on the edge of the amphitheater stage during musical performances, a tendency that earned him his name.