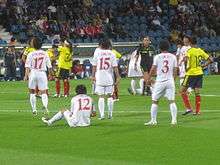 During the team's participation at the 2011 FIFA Women's World Cup, on 7 July 2011, FIFA announced that two of its players, Song Jong-Sun and Jong Pok-Sim, failing doping tests during the tournament and were provisionally suspended prior to their team’s match against Colombia.[3] On 16 July, FIFA announced that three additional players from North Korea tested positive following target testing of the whole team.[4] On 25 August 2011, the North Korean team was fined US$ 400,000 which is equal to the prize it received by finishing 13th in the 2011 tournament, and was excluded from participation at the 2015 FIFA Women's World Cup, including its qualification round.[5]