The North Korea national football team (recognized as Korea DPR by FIFA and known colloquially and in the media as North Korea[2]) represents the Democratic People's Republic of Korea in international association football and is controlled by the DPR Korea Football Association, the governing body for football in North Korea.

North Korea surprised with a good showing at their World Cup debut, reaching the quarter-finals in 1966, beating Italy in the group stage. Controversy arose during the 2006 World Cup Qualifiers, when the team's supporters caused problems because of the team's failure to qualify. In 2009, the team qualified for the 2010 FIFA World Cup, the second World Cup appearance in their history. North Korea has qualified for the AFC Asian Cup four times; in 1980, when they finished fourth, in 1992, 2011 and in 2015. The current team is composed of both native North Koreans and Chongryon-affiliated Koreans born in Japan.

In the 1966 World Cup, North Korea played their matches at Middlesbrough's home ground Ayresome Park, when the team caused an upset, beating Italy 1–0 to gain a spot in the quarter-finals. There, they lost 5–3 to Portugal, despite taking a 3–0 lead after thirty minutes. The North Korea team was the first Asian team to progress beyond the first round of the World Cup finals.[3] In a 1999 documentary featuring interviews with surviving members of the team,[4] they describe themselves as having been welcomed home as national heroes.

The North Korea football team finished second in their group in the 1976 Summer Olympics, but lost 5–0 to Poland in the quarter-finals.[5]

In March 2005, the North Korean team entered a match with Iran with limited chances of qualifying for the World Cup finals due to poor performance in early fixtures. During the match hosted in Pyongyang, North Korean fans became enraged when the referee failed to award North Korea a penalty kick after a controversial play near the end of the match. Demanding a penalty, they rushed Syrian referee Mohamed Kousa, who instead gave a North Korean player a red card. Bottles, stones and chairs were thrown onto the field following the play. After the match was over, North Korean fans refused to let the Iranian team leave the stadium on their team bus. The violence was so severe that riot police forced back the crowd.[6] Following this incident, North Korea lost its right to host the subsequent home match with Japan and the game was instead played behind closed doors to an empty stadium in Bangkok, Thailand.[7]

The North Korea football team qualified for the 2010 FIFA World Cup after finishing 2nd place in Group B of Asian qualifying.[8] Their finishing place was not decided until the day of the last fixture of the group, in which they needed not only to avoid defeat in a match against Saudi Arabia, but also rely on Iran not winning in a match against South Korea. In the end, after possessing the same number of points as Saudi Arabia, North Korea qualified through goal difference.[9][10] With a final pre-tournament FIFA ranking of 105th in the world, North Korea was the lowest-ranked team to qualify for the World Cup since the rankings began in 1993.

The North Korean and Brazilian teams in 2010 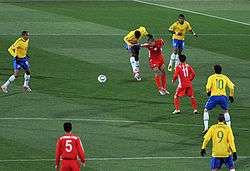 North Korea playing against Brazil in the 2010 World Cup

2010 was North Korea's first appearance at the World Cup since 1966.[11] The draw placed North Korea in Group G. They played their first match against five-time winners Brazil on 15 June, with Brazil winning 2–1 in a game where North Korea was well organized defensively and showed resilience, frustrating the Brazilians. Despite their best efforts, they were nevertheless outmatched and eventually broken down. Maicon's relief was visible after his goal to finally put Brazil ahead.

In their next game against Portugal on 21 June, they were defeated 0–7. Despite starting well (as against Brazil), with a defensive, well organised approach, once Portugal scored their first, the Koreans' defense unravelled and the rest followed with relative ease. They lost their final match against Côte d'Ivoire 0–3 on 25 June. Having lost all three group matches, they were knocked out, finishing at the bottom of Group G. It was reported that the small contingency of apparent North Korean football fans were actually Chinese, to whom North Korea administration sold their share of tickets.[12] North Korea subsequently denied the report, claiming that a small number were permitted to travel to the World Cup. There were reports that the North Korean government punished the coach and players of the team by sending them on a hard labour in mines. However, FIFA's investigators could not confirm that.[13]

For more details on this topic, see East Asian Cup.

The following players were selected for the 2015 EAFF East Asian Cup. Caps and goals updated as of 13 October 2015, after the game against

As of March 29, 2016. Players in bold are still active at international level.