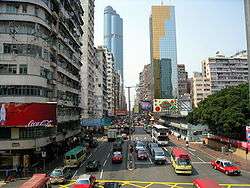 Mong Kok (also spelled Mongkok, often abbreviated as MK) is an area in the Yau Tsim Mong District, on the western part of Kowloon Peninsula in Hong Kong. The Prince Edward area occupies the northern part of Mong Kok.

Mong Kok is one of the major shopping areas in Hong Kong. The area is characterized by a mixture of old and new multi-story buildings, with shops and restaurants at street level, and commercial or residential units above. Major industries in Mong Kok are retail, restaurants (including fast food) and entertainment. It has been described[1] and portrayed in films as an area in which triads run bars, nightclubs, and massage parlors. With its extremely high population density of 130,000/km2 or 340,000 per square mile, Mong Kok was described as the busiest district in the world by the Guinness World Records.[2]

For a period, the area was also called Argyle, and this name was used for the MTR station when it opened in 1979. The office building 旺角中心; "Mong Kok Centre", which was named after the area, is known in English as Argyle Centre rather than Mong Kok Centre.

Mong Kok is part of Yau Tsim Mong District. It was part of the Mong Kok District before the district was merged in 1994. The area belongs to the Kowloon West geographical constituency of the Legislative Council of Hong Kong.

Displays at the Chinese University of Hong Kong include antique potteries indicating that there might have been settlements in the area as early as the Jin Dynasty (265-420).[4]

The area used to be a Hakka settlement, with about 200 villagers according to Bao'an records in 1819.[5]

On 10 August 2008 the Cornwall Court fire broke out. More than 200 firefighters were involved in the rescue operation. Four people died, including two firefighters.[6]

Mong Kok received a lot of negative media attention for many acid attacks on Sai Yeung Choi Street from December 2008 through January 2010.

The area was the site of protracted demonstrations during the 2014 Hong Kong protests, including the gau wu campaign, and was also the site of the 2016 Mong Kok civil unrest. 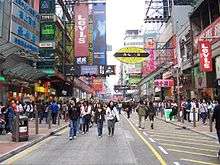 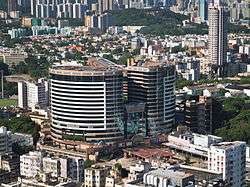 Grand Century Place. Mong Kok East Station is visible at the bottom left. The area in the background is part of Kowloon City District.

Mong Kok preserves its traditional characteristics with an array of markets, small shops, and food stalls that have disappeared from other areas during the past several decades of economic developments and urban transformation. As such, a few of these streets in Mong Kok have acquired nicknames reflecting their own characteristics. Some interesting sites are:

Some popular shopping plazas located in this dense area include: 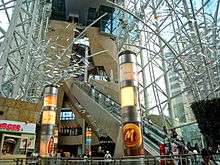 Other streets in the area include:

The Mong Kok area has many curb-side "food-booths" selling traditional snacks such as fish balls, fried beancurd (tofu) and various dim sum. These fingerfood are very popular in Hong Kong, especially for folks on the run. In addition, there are restaurants serving different kinds of cuisine, ranging from Japanese to Thai to Italian. 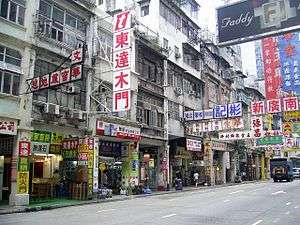 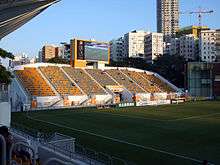 Mong Kok Stadium in 2011, after renovation

Educational institutions in Mong Kok include: 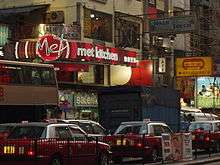 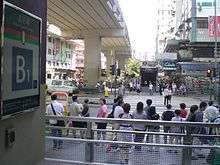 The main thoroughfares are:

Mong Kok was the setting for the 2004 hit film One Night in Mongkok directed by Derek Yee. The movie portrays Mong Kok, one of the most densely populated places on Earth, as a hotbed of illicit activity. Similarly, the district was also the setting of the 1996 film Mongkok Story (旺角風雲) directed by Wilson Yip, which depicts a young man who becomes involved in a triad gang.[12][13] The 2009 film To Live and Die in Mongkok is also set in Mong Kok. The literal Chinese title of the 1988 film As Tears Go By by Wong Kar-wai is "Mong Kok Carmen". Part of Robert Ludlum's 1986 novel The Bourne Supremacy was set in Mong Kok.

The area is known locally for a youth subculture, the Mong Kok culture.

Mong Kok was one of the main sites of the 2014 Hong Kong protests. Banks, jewelry stores and clothing stores were closed as a result of the pro-democracy protests.[14]