Kutai, or Dayak Kutai, is a historic region in East Kalimantan in Indonesia on Borneo and also name of Dayak people on the region with a language of the same name and their historic. Today the name is preserved in the names of three regencies in East Kalimantan, the Kutai Kartanegara Regency, the West Kutai Regency and the East Kutai Regency. The major river of the region was and is the Mahakam River.

The history is usually divided into two periods, that of the early Kutai Martadipura phase some time around 350–400 and the later Kutai Kartanegara phase beginning around 1300. The first period produced the earliest known inscriptions in Indonesia. 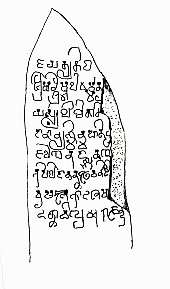 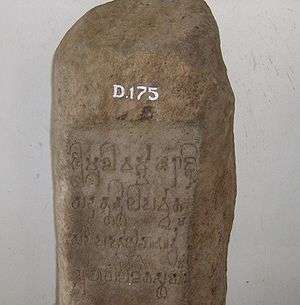 Kutai Martadipura is a 4th-century Indianized kingdom located in the Kutai area, East Kalimantan.[1]:52 It is one of the earliest ancient kingdom in Indonesian history. Seven stone pillars, or yūpa (“sacrificial posts”), have been found in Kutai, Kaman Estuary, near the Mahakam River.[2] The plinths bear an inscription in the Pallava script of India reading "A gift to the Brahmin priests". The style of the script has been dated to the last half the 4th century.[3] It is believed these religions were brought to Indonesia around the 2nd and 4th centuries, respectively, when Indian traders arrived on the islands of Sumatra, Java and Sulawesi.[4]

The names of three rulers are known from the inscriptions. The first ruler mentioned is Kuḍungga, the “lord of men” (narendra), his son Aśwawarman, styled the “founder of the dynasty” (vaṇśa-kartṛ) and grandson of the first and son of the later, Mulavarman called the “lord of kings” (rājendra). As Kuṇḍungga does not seem to be a name of Sanskrit hinduistic style while the other two are, it is presumed he was a leader of local origin ( Dayak People ) and it was his son Aśwawarman that adopted the hinduistic belief.[3] It was Mūlawarman who let these inscriptions be made. While nothing of the military actions of his two predecessors is known, "Raja" Mūlawarman is stated to have conquered his neighbours in battle. He is also said to have increased the land of Kutai by a local ritual called "asvaredjwa". This ritual required a horse released to his land. The footsteps of the freely roaming horse were taken as evidence that this land belonged to Kutai. Mulawarman was also known for his tribute of gold to his God. The name of his kingdom is not mentioned on the inscriptions nor do any other documents in other countries relate to a kingdom at this time in this region. It is not known what became of the kingdom after these pillars had been erected. It may be possible that the name Kutai, as in Tuñjung Kute of the 1365 Javanese Majapahit poem Nāgarakṛtāgama is as ancient and reflects the original name used a thousand years earlier.

Around the end of the 13th century the kingdom of Kutai Kartanegara was established in the region of Tepian Batu or Kutai Lama. The first known ruler is Aji Batara Agung Dewa Sakti, who is thought to have ruled from 1300 to 1325.[2] Aji Pangeran Sinum Panji Mendapa, who ruled 1635–1650, was able to conquer the kingdom of Kutai Martadipura and merged the two realms thus Kutai Kartanegara Ing Martadipura.[2]

In 1667 the Dutch V.O.C. attacked Makassar on the island of Sulawesi leading to the downfall of the Bugis Kingdom of Gowa. Some of the Bugis under the leadership of Lamohang Daeng Mangkona or Pua Ado I immigrated to Kutai on neighbouring Borneo (Kalimantan) and the ruler of Kutai allowed them to settle in Kampung Melantai around the Karang Mumus River, now known as Kampung Selili. This settlement eventually developed into the modern town of Samarinda.

Islam took hold in the region since the 17th century (most of the Bugis were Muslims) and Aji Muhammad Idris, ruling 1732–1739?, was the first ruler to have an Islamic name.

After a civil war Aji Imbut, after finally becoming the ruler as Aji Muhammad Muslihuddin in 1780, moved the capital in 1782 from Pemarangan to Tepian Pandan.[2] The name of the capital city eventually developed from Tangga Arung to its present form of Tenggarong.

In 1844 the Dutch defeated the Sultan Aji Muhammad Salehudin, forcing him into exile, and took direct control of Kutai.

The Japanese invaded the region in 1942 and acknowledged a "Kooti Kingdom", that was a subject of the Tenno. In 1945 Kutai joined, along with its neighbours, into the East Kalimantan federation.

In 1949 Kutai finally became part of the United Republic of Indonesia.