Greater India is the historical extent of Indian culture beyond the Indian subcontinent. This particularly concerns the spread of Hinduism and Buddhism from India to Southeast Asia, Central Asia and China by the Silk Road during the early centuries of the Common Era, and the spread of the Indian writing systems like the Pallava script of the south Indian Pallava dynasty to Southeast Asia[1][2] and Siddhaṃ script to East Asia through Gupta Empire.[3][4] by the travellers and maritime traders of the 5th to 15th centuries. It also describes the establishment of Indianised Kingdoms in Southeast Asia and the spread of the Indian script, architecture and administration.[5][6] To the west, Greater India overlaps with Greater Persia in the Hindu Kush and Pamir Mountains. The term is tied to the geographic uncertainties surrounding the "Indies" during the Age of Exploration. 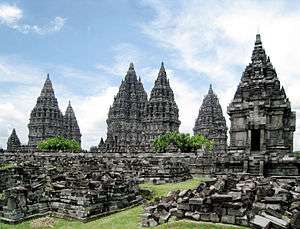 The 9th-century Shivaistic temple of Prambanan in Central Java near Yogyakarta, the largest Hindu temple in Indonesia

In medieval Europe the concept of "three Indias" was in common circulation. Greater India was the southern part of South Asia, Lesser India was the northern part of South Asia, and Middle India was the region near Middle East.[7] The name Greater India (Portuguese: India Maior[7][8][9][10]) was used at least from the mid-15th century.[8] The term, which seems to have been used with variable precision,[11] sometimes meant only the Indian subcontinent;[12] Europeans used a variety of terms related to South Asia to designate the South Asian peninsula, including High India, Greater India, Exterior India and India aquosa.[13]

However, in some accounts of European nautical voyages, Greater India (or India Major) extended from the Malabar Coast (present-day Kerala) to India extra Gangem[14] (lit. "India, beyond the Ganges," but usually the East Indies, i.e. present-day Malay Archipelago) and India Minor, from Malabar to Sind.[15] Farther India was sometimes used to cover all of modern Southeast Asia and sometimes only the mainland portion.[13] Until the fourtheenth century, India could also mean areas along the Red Sea, including Somalia, South Arabia, and Ethiopia (e.g., Diodorus of Sicily of the first century BCE says that "the Nile rises in India" and Marco Polo of the fourteenth century says that "Lesser India ... contains ... Abash [Abyssinia]")[16]

In late 19th-century geography "Greater India" referred to Hindustan (Northwestern Subcontinent) which included the Punjab, the Himalayas, and extended eastwards to Indochina (including Burma), parts of Indonesia (namely, the Sunda Islands, Borneo and Celebes), and the Philippines."[17] German atlases sometimes distinguished Vorder-Indien (Anterior India) as the South Asian peninsula and Hinter-Indien as Southeast Asia.[13]

In plate tectonic models of the India–Asia collision, "Greater India" signifies "the Indian sub-continent plus a postulated northern extension".[18] Although its usage in geology pre-dates plate tectonic theory,[19] the term has seen increased usage since the 1970s. 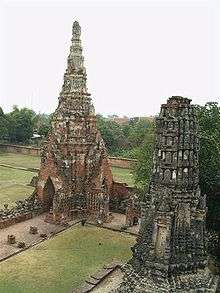 Ruins of Ayutthaya in Thailand which was named after Ayodhya

The concept of the Indianised kingdoms, first described by George Coedès, is based on Hindu and Buddhist cultural and economic influences in Southeast Asia.[20] Butuan, Champa, Dvaravati, Funan, Gangga Negara, Kadaram, Kalingga, Kutai, Langkasuka, Pagan, Pan Pan, Po-ni, Tarumanagara and Tondo were among the earliest Hindu kingdoms in Southeast Asia, established around the 1st to 4th centuries CE. Despite being culturally akin to Hindu cultures, these kingdoms were indigenous and independent of the Indian mainland. States such as Srivijaya, Majapahit and the Khmer empire developed territories and economies that rivalled those in India itself. Borobudur in Java, for example, is the largest Buddhist monument ever built.[21] Coedès has been criticised for understating the Southeast Asian element of these kingdoms, in an unconscious echo of the European "civilising mission."[22]

Professor Robert Lingat — characterised by law professor John Henry Wigmore as the greatest (and almost the only) authority on Siamese legal history[23]  — tended to emphasise the contribution of Southeast Asian societies and rulers to the formation of these states. In particular, where Coedès saw Indian merchants as the founders of these states, Lingat saw Southeast Asian rulers as founding them and then importing Indian ritual specialists as advisers on rajadharma, or the practices of Indian kingship. This view is supported by the argument that Indian merchants would not have possessed the ritual knowledge which became so prominent in these kingdoms.[24]

These Indianised kingdoms developed a close affinity with and internalised Indian religious, cultural and economic practices without significant direct input from Indian rulers themselves. The issue remains controversial; Quaritch Wales in particular is cited[25] as holding that Indianisation was the work of Indian traders and merchants as opposed to political leaders, although the travels of Buddhist monks such as Atisha later became important. There was also a merchant named Magadu, known to history as Wareru and founder of the Hanthawaddy Kingdom, who commissioned Mon specialists in Indian traditions to compile the Code of Wareru, which has formed the basis for Burmese common law down to the present. Most Indianised kingdoms combined both Hindu and Buddhist beliefs and practices in a syncretic manner. Kertanagara, the last king of Singhasari, described himself as "Sivabuddha", a simultaneous incarnation of the Hindu god Shiva and the Buddha.[26]

Southeast Asian rulers enthusiastically adopted elements of rajadharma (Hindu and Buddhist beliefs, codes, and court practices) to legitimise their own rule and constructed cities, such as Angkor, to affirm royal power by reproducing a map of sacred space derived from the Ramayana and Mahabharata. Southeast Asian rulers frequently adopted lengthy Sanskrit titles and founded cities, such as Ayutthaya in Thailand, named after those in the Indian epics.

Cultural and trading relations between the powerful Chola dynasty of South India and the Southeast Asian Hindu kingdoms led the Bay of Bengal to be called "The Chola Lake", and the Chola attacks on Srivijaya in the 10th century CE are the sole example of military attacks by Indian rulers against Southeast Asia. The Pala dynasty of Bengal, which controlled the heartland of Buddhist India, maintained close economic, cultural and religious ties, particularly with Srivijaya. 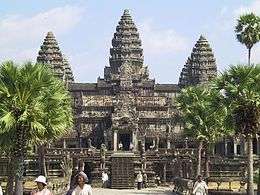 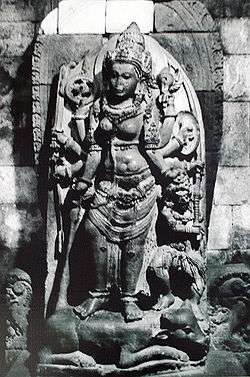 A statue of Hindu goddess Durga Mahisasuramardini in Prambanan northern cella, dated to the 9th-century Medang i Bhumi Mataram kingdom in Central Java. 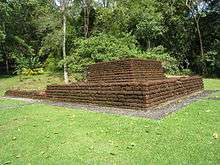 Candi Bukit Batu Pahat of Bujang Valley. A Hindu-Buddhist kingdom ruled ancient Kedah possibly as early as 110 CE, the earliest evidence of strong Indian influence which was once prevalent among the pre-Islamic Kedahan Malays.

Some of their formulations were inspired by concurrent excavations in Angkor by French archaeologists and by the writings of French Indologist Sylvain Lévi. The scholars of the society postulated a benevolent ancient Indian cultural colonisation of Southeast Asia, in stark contrast—in their view—to the colonialism of the early 20th century.[39][40][41]

The term Greater India and the notion of an explicit Hindu colonisation of ancient Southeast Asia have been linked to both Indian nationalism[42] and Hindu nationalism.[43] However, many Indian nationalists, like Jawaharlal Nehru and Rabindranath Tagore, although receptive to "an idealisation of India as a benign and uncoercive world civiliser and font of global enlightenment,"[44] stayed away from explicit "Greater India" formulations.[45] In addition, some scholars have seen the Hindu/Buddhist acculturation in ancient Southeast Asia as "a single cultural process in which Southeast Asia was the matrix and South Asia the mediatrix."[46] In the field of art history, especially in American writings, the term survived longer due to the influence of art theorist Ananda Coomaraswamy. Coomaraswamy's view of pan-Indian art history was influenced by the "Calcutta cultural nationalists."[47]

By some accounts Greater India consists of "lands including Burma, Java, Cambodia, Bali, and the former Champa and Funan polities of present-day Vietnam,"[48] in which pre-Islamic Indian culture left an "imprint in the form of monuments, inscriptions and other traces of the historic "Indianising" process."[48] By some other accounts, many Pacific societies and "most of the Buddhist world including Ceylon, Tibet, Central Asia, and even Japan were held to fall within this web of Indianising culture colonies"[48] This particular usage—implying cultural "sphere of influence" of India—was promoted by the Greater India Society, formed by a group of Bengali men of letters,[49] and is not found before the 1920s. The term Greater India was used in historical writing in India into the 1970s.[50] 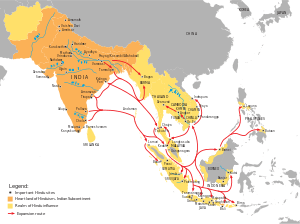 Expansion of Hinduism in Southeast Asia.

For more than a thousand years, Indian Hindu-Buddhist influence was therefore the major factor that brought a certain level of cultural unity to the various states of the region. The Pali and Sanskrit languages and the Indian script, together with Theravada and Mahayana Buddhism, Brahmanism and Hinduism, were transmitted from direct contact as well as through sacred texts and Indian literature, such as the Ramayana and the Mahabharata epics.

From the 5th to the 13th centuries, Southeast Asia had developed some prosperous and very powerful colonial empires that became extremely active in Hindu-Buddhist artistic creations and architectural developments. Some of these art and architectural creations are even rivalled, or even exceeded those built in India — especially in its sheer size, design and aesthetic achievements. The notable examples are Borobudur in Java and Angkor monuments in Cambodia. The Srivijaya Empire to the south and the Khmer Empire to the north competed for influence in the region.

A defining characteristic of the cultural link between Southeast Asia and the Indian subcontinent is the spread of ancient Indian Vedic/Hindu and Buddhist culture and philosophy into Myanmar, Thailand, Indonesia, Malaya, Laos and Cambodia. Indian scripts are found in Southeast Asian islands ranging from Sumatra, Java, Bali, south Sulawesi and most of the Philippines.[51] 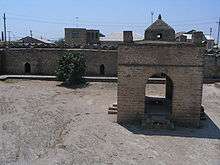 Atashgah of Baku, a fire temple in Azerbaijan used by both Hindus[52][53] and Persian Zoroastrians

The diffusion of Indian culture is demonstrated with the following examples:

One of the most tangible evidence of dharmic tradition commonality, probably is the widespread of Añjali Mudrā as the gesture of greeting and respect. It is demonstrated in Indian namasté, and similar gestures are known in Southeast Asia, as it cognate to the Cambodian sampeah, Indonesian sembah and Thai wai. 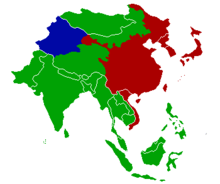 Scholars like Sheldon Pollock have used the term Sanskrit Cosmopolis to describe the region, and argued for millennium-long cultural exchanges without necessarily involving migration of peoples or colonisation. Pollock's 2006 book The Language of the Gods in the World of Men makes a case for studying the region as comparable with Latin Europe and argues that the Sanskrit language was its unifying element.

Sanskrit and related languages have also influenced their Sino-Tibetan-speaking neighbours to the north through the spread of Buddhist texts in translation.[57] Buddhism was spread to China by Mahayanist missionaries sent by Emperor Ashoka mostly through translations of Buddhist Hybrid Sanskrit and Classical Sanskrit texts, and many terms were transliterated directly and added to the Chinese vocabulary. The situation in Tibet is similar; many Sanskrit texts survive only in Tibetan translation (in the Tanjur).

In Southeast Asia, languages such as Thai and Lao contain many loan words from Sanskrit, as does Khmer to a lesser extent. For example, in Thai, Rāvaṇa, the legendary emperor of Sri Lanka, is called 'Thosakanth' which is derived from his Sanskrit name 'Daśakaṇṭha' ("having ten necks").

Many Sanskrit loanwords are also found in Austronesian languages, such as Javanese particularly the old form from which nearly half the vocabulary is derived from the language.[58] [59] Other Austronesian languages, such as traditional Malay, modern Indonesian, also derive much of their vocabulary from Sanskrit, albeit to a lesser extent, with a large proportion of words being derived from Arabic. Similarly, Philippine languages such as Tagalog have many Sanskrit loanwords.

A Sanskrit loanword encountered in many Southeast Asian languages is the word bhāṣā, or spoken language, which is used to mean language in general, for example bahasa in Malay, Indonesian and Tausug, basa in Javanese, Sundanese, and Balinese, phasa in Thai and Lao, bhasa in Burmese, and phiesa in Khmer.