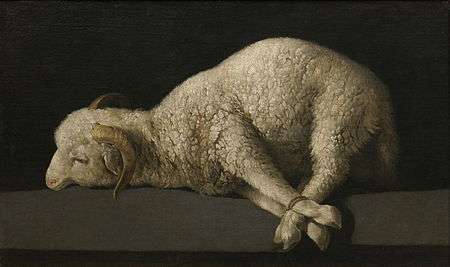 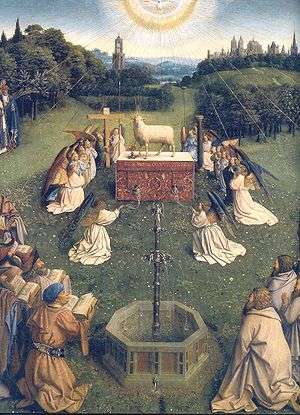 Lamb of God (Greek: Ἀμνὸς τοῦ Θεοῦ, Amnos tou Theou; Latin: Agnus Dei) is a title for Jesus that appears in the Gospel of John. It appears at John 1:29, where John the Baptist sees Jesus and exclaims, "Behold the Lamb of God who takes away the sin of the world."[1]

Christian doctrine holds that divine Jesus chose to suffer crucifixion at Calvary as a sign of his full obedience to the will of his divine Father, as an "agent and servant of God".[2][3] The Christian concept of a Lamb of God is based very loosely on the Jewish Korban Pesach, which has nothing to do with human sacrifice nor with sin in any way. In Christian theology the Lamb of God is viewed as foundational and integral to the message of Christianity.[4][5]

A lion-like lamb that rises to deliver victory after being slain appears several times in the Book of Revelation.[6] It is also referred to in Pauline writings, 1 Corinthians 5:7 suggests that Saint Paul intends to refer to the death of Jesus, who is the Paschal Lamb, using the theme found in Johannine writings.[7] The lamb metaphor is also in line with Psalm 23, which depicts God as a shepherd leading his flock (mankind).

The Lamb of God title is widely used in Christian prayers, and the Agnus Dei is used as a standard part of the Catholic Mass, as well as the classical Western Liturgies of the Anglican and Lutheran Churches. It also is used in liturgy and as a form of contemplative prayer.[8][9] The Agnus Dei also forms a part of the musical setting for the Mass.

As a visual motif the lamb has been most often represented since the Middle Ages as a standing haloed lamb with a foreleg cocked "holding" a pennant with a red cross on a white ground, though many other ways of representing it have been used.

The title Lamb of God for Jesus appears in the Gospel of John, with the initial proclamation: "Behold the Lamb of God who takes away the sin of the world" in John 1:29, the title reaffirmed the next day in John 1:36.[1] The second use of the title Lamb of God takes place in the presence of the first two apostles of Jesus, who immediately follow him, address him as Rabbi with respect and later in the narrative bring others to meet him.[10]

These two proclamations of Jesus as the Lamb of God closely bracket the Baptist's other proclamation in John 1:34: "I have borne witness that this is the Son of God". From a Christological perspective, these proclamations and the descent of the Holy Spirit as a dove in John 1:32 reinforce each other to establish the divine element of the Person of Christ.[1] In Johannine Christology the proclamation "who takes away the sin of the world" begins the unfolding of the salvific theme of the redemptive and sacrificial death of Jesus followed by his resurrection which is built upon in other proclamations such as "this is indeed the Saviour of the world" uttered by the Samaritans in John 4:42.[11][12] 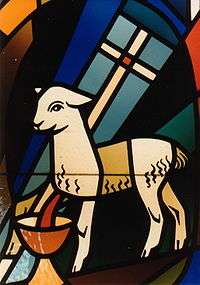 Lamb bleeding into the Holy Chalice, carrying the vexillum

The Book of Revelation includes over twenty-nine references to a lion-like lamb ("slain but standing") which delivers victory in a manner reminiscent of the resurrected Christ.[6] In the first appearance of the lamb in Revelation (5:1-7) only the lamb (which is of the tribe of Judah, and the root of David) is found worthy to take the judgment scroll from God and break the seals.[6] The reference to the lamb in Revelation 5:6 relates it to the Seven Spirits of God which first appear in Revelation 1:4 and are associated with Jesus who holds them along with seven stars.[13]

In Revelation 21:14 the lamb is said to have twelve apostles.[6] The handing of the scroll (i.e. the book containing the names of those who will be saved) to the risen lamb signifies the change in the role of the lamb. In Calvary, the lamb submitted to the will of the Father to be slain, but now is trusted with the judgment of mankind.[14]

From the outset, the book of Revelation is presented as a "revelation of Jesus Christ" and hence the focus on the lamb as both redeemer and judge presents the dual role of Jesus: he redeems man through self-sacrifice, yet calls man to account on the day of judgment.[15]

The concept of the Lamb of God fits well within John's "agent Christology", in which sacrifice is made as an agent of God or servant of God for the sake of eventual victory.[3][16] 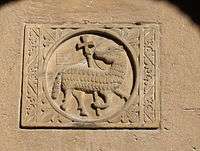 The 11th century Christology of Saint Anselm of Canterbury specifically disassociates Lamb of God from the Old Testament concept of a scapegoat which is subjected to punishment for the sins of others, without knowing it or willing it.[2] Anselm emphasized that as Lamb of God, Jesus chose to suffer in Calvary as a sign of his full obedience to the will of the Father.[2]

John Calvin presented the same Christological view of "The Lamb as the agent of God" by arguing that in his trial before Pilate and while at Herod's Court Jesus could have argued for his innocence, but instead remained mostly quiet and submitted to Crucifixion in obedience to the Father, for he knew his role as the Lamb of God.[18][19]

In modern Eastern Orthodox Christology, Sergei Bulgakov argued that the role of Jesus as the Lamb of God was "pre-eternally" determined by the Father before the creation of the world, as a sign of love by considering the scenario that it would be necessary to send The Son as an agent to redeem humanity disgraced by the fall of Adam.[20] 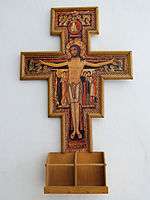 Multiple hypotheses about the suitable symbolism for the Lamb of God have been offered, within various Christological frameworks, ranging from the interpretation of Old Testament references to those of the Book of Revelation.[21] One view suggests the symbolism of Leviticus 16 as scapegoat, coupled with Romans 3:21-25 for atonement, while another view draws parallels with the Paschal Lamb in Exodus 12:1-4, coupled with John 1:29-36, and yet another symbolism relies on Revelation 5:5-14 in which the lamb is viewed as a lion who destroys evil.[21][22] However, as above Saint Anselm and John Calvin's view reject the Scapegoat symbolism for they view Jesus as making a knowing sacrifice as an agent of God, unlike an unwitting Scapegoat.[2][18][19]

In modern Roman Catholic Christology, Karl Rahner has continued to elaborate on the analogy that the blood of the Lamb of God, and the water flowing from the side of Christ on Calvary had a cleansing nature, similar to baptismal water. In this analogy, the blood of the Lamb washed away the sins of humanity in a new baptism, redeeming it from the fall of Adam.[23]

Agnus Dei from Mass in G by Schubert.

In the Mass of the Roman Rite and also in the Eucharist of the Anglican Communion, the Lutheran Church, and the Western Rite of the Orthodox Church the Agnus Dei is the invocation to the Lamb of God sung or recited during the fraction of the Host.[24] It is said to have been introduced into the Mass by Pope Sergius I (687–701).[25]

Agnus Dei has been set to music by many composers, usually as part of a Mass setting.[26][27] 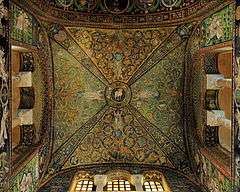 In Christian iconography, an Agnus Dei is a visual representation of Jesus as a lamb, since the Middle Ages, usually holding a standard or banner with a cross. This normally rests on the lamb's shoulder and is held in its right foreleg. Often the cross will have a white banner suspended from it charged with a red cross (similar to St George's Cross), though the cross may also be rendered in different colors. Sometimes the lamb is shown lying atop a book with seven seals hanging from it. This is a reference to the imagery in the Book of Revelation 5:1-13, ff. Occasionally, the lamb may be depicted bleeding from the area of the heart (Cf. Revelation 5:6), symbolizing Jesus' shedding of his blood to take away the sins of the world (Cf. John 1:29, 1:36).

In Early Christian art the symbol appears very early on. Several mosaics in churches include it, some showing a row of twelve sheep representing the apostles flanking the central Agnus Dei, as in Santi Cosma e Damiano, Rome (526-30).

The Moravian Church uses an Agnus Dei as their seal with the surrounding inscription Vicit agnus noster, eum sequamur ("Our Lamb has conquered, let us follow him").

Although the depiction of Jesus as the Lamb of God is of ancient origin, it is not used in the liturgical iconography of the Eastern Orthodox Church. The reason for this is that the depictions of Jesus in the Orthodox Church are anthropomorphic rather than symbolic, as a confession of the Orthodox belief in the Incarnation of the Logos. However, there is no objection to the application of the term "Lamb of God" to Jesus. In fact, the Host used in the Orthodox Divine Liturgy is referred to as the Lamb (Greek: άμνος, amnos; Slavonic: Агнецъ, agnets). 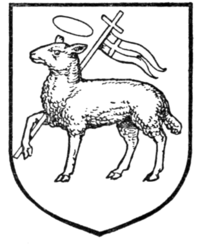 An heraldic escutcheon blazoned as A paschal lamb, as drawn by Arthur Charles Fox-Davies (1871-1928)

A Paschal Lamb is a charge used in heraldry, for example as the crest of the Davie Baronets, and is blazoned: A paschal lamb[28] This charge is depicted as a lamb standing with body facing towards the dexter (viewer's left), with nimbus, and with head facing forwards (or turned looking backwards to sinister, termed reguardant) holding under its right foreleg a flagpole, tipped with a small cross, resting at a diagonal angle over its shoulder, flying a banner of the Cross of St. George (except in Perth's coat of arms, where it flies a banner of the Cross of St Andrew).

In the Roman Catholic Church, an Agnus Dei is a disc of wax, stamped with an image of Jesus as a lamb bearing a cross, that is blessed by the Pope as a sacramental.[29] These were often set in jewelry, and might be worn round the neck on a chain, or as a brooch.