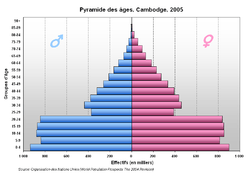 Structure of the population [3]

Structure of the population (01.07.2013) (Estimates) (Excluding foreign diplomatic personnel and their dependants. Data based on the 2008 Population Census) :

Total fertility rate and other related statistics by province, as of 2014:[8] 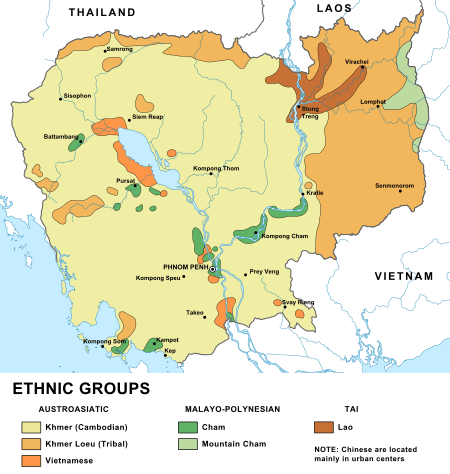 The largest of the ethnic groups in Cambodia are the Khmer, who comprise approximately 90% of the total population and primarily inhabit the lowland Mekong subregion and the central plains.

The Khmer historically have lived near the lower Mekong River in a contiguous arc that runs from the southern Khorat Plateau where modern-day Thailand, Laos and Cambodia meet in the northeast, stretching southwest through the lands surrounding Tonle Sap lake to the Cardamom Mountains, then continues back southeast to the mouth of the Mekong River in southeastern Vietnam.

Approximately 17-21 separate ethnic groups, most of whom speak Austroasiatic languages related to Khmer, are included in the Khmer Loeu designation, including the Kuy and Tampuan people. These peoples are considered by the Khmer to be the aboriginal inhabitants of the land. Two of these highland groups, the Rade and the Jarai, are Chamic peoples who speak Austronesian languages descended from ancient Cham. These indigenous ethnic minorities haven't integrated into Khmer culture and follow their traditional animist beliefs.

The non-indigenous ethnic minorities include immigrants and their descendants who live among the Khmer and have adopted, at least nominally, Khmer culture and language. The three groups most often included are the Chinese Cambodians, Vietnamese and Cham peoples. The Chinese have immigrated to Cambodia from different regions of China throughout Cambodia's history, integrating into Cambodian society and today Chinese Cambodians or Cambodians of mixed Sino-Khmer ancestry dominate the business community, politics and the media. The Cham are descendants of refugees from the various wars of the historical kingdom of Champa. The Cham live amongst the Khmer in the central plains but in contrast to the Khmer who are Theravada Buddhists, the vast majority of Cham follow Islam.[9]

There are also small numbers of other minority groups. Tai peoples in Cambodia include the Lao along the Mekong at the northeast border, Thai (urban and rural), and the culturally Burmese Kola, who have visibly influenced the culture of Pailin Province. Even smaller numbers of recent Hmong immigrants reside along the Lao border and various Burmese peoples have immigrated to the capital, Phnom Penh.

The following demographic statistics are from the CIA World Factbook, unless otherwise indicated.

Note: estimates for this country take into account the effects of excess mortality due to AIDS; this can result in lower life expectancy, higher infant mortality and death rates, lower population growth rates, and changes in the distribution of population by age and sex than would otherwise be expected (2011 est.) 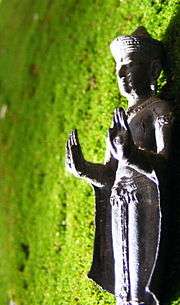 Definition: age 15 and over can read and write

Countries with notable populations of overseas Cambodians are: