The lateral sulcus (also called Sylvian fissure or lateral fissure) is one of the most prominent structures of the human brain.

The lateral sulcus divides both the frontal lobe and parietal lobe above from the temporal lobe below. It is in both hemispheres of the brain but is longer in the left hemisphere in most people. The lateral sulcus is one of the earliest-developing sulci of the human brain. It first appears around the fourteenth gestational week.[1]

The lateral sulcus has a number of side branches. Two of the most prominent and most regularly found are the ascending (also called vertical) ramus and the horizontal ramus of the lateral fissure, which subdivide the inferior frontal gyrus. The lateral sulcus also contains the transverse temporal gyri, which are part of the primary and below the surface auditory cortex.

Partly due to a phenomenon called Yakovlevian torque, the lateral sulcus is often longer and less curved on the left hemisphere than on the right.

It is also located near Sylvian Point.

The area lying around the Sylvian fissure is often referred to as the perisylvian cortex.[2]

The human secondary somatosensory cortex (S2, SII) is a functionally-defined region of cortex in the parietal operculum on the ceiling of the lateral sulcus. 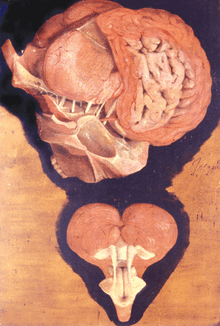 The first depiction of the lateral sulcus (in its top right side) in 1600 in the Tabulae Pictae 112.10 by Girolamo Fabrici d'Acquapendente .

The cerebral cortex was not depicted in a realistic manner until the 17th century with the Sylvian fissure being first accurately painted by Girolamo Fabrici d'Acquapendente in 1600 to provide plates for his Tabulae Pictae.[3][4][5]

The engraving by J. Voort Kamp published in 1641 that led to the lateral sulcus being named after Franciscus Sylvius

Its first description is traditionally taken to be in 1641 by Caspar Bartholin who attributed its discovery to Franciscus Sylvius (1614–1672), professor of medicine at Leiden University his book Casp. Bartolini Institutiones Anatomicae where it is noted that "F.S. [F.S. probably refers to Franciscus Sylvius] If you examine the indentations which are represented in Figure 5 quite attentively, you will notice that they are very deep and that the brain is divided from one side to the other by the “anfractuosa fissura,” which starts in the front part near the ocular roots, and from there moves backwards above the base of the spinal cord, following the temporal bones, and it divides the upper part of the brain from the lower."[3]

It has been suggested that since Caspar Bartholin died in 1629 and Franciscus Sylvius only started medicine in 1632 that these words are either by his son Thomas Bartholin or Franciscus Sylvius. In 1663 in his Disputationem Medicarum, Franciscus Sylvius described the lateral fissure: "Particularly noticeable is the deep fissure or hiatus which begins at the roots of the eyes (oculorum radices) . . . it runs posteriorly above the temples as far as the roots of the brain stem (medulla radices). . . . It divides the cerebrum into an upper, larger part and a lower, smaller part".[3]

Pop musician David Bowie referred to depth psychologist Carl Jung as "...crashing out with Sylvian" in his lyrics to Drive In Saturday’ released on his 1973 album Aladdin Sane. In 2015,[6] artist Tanja Stark suggested Bowie had drawn a cryptic link between Jung’s waking hallucinatory visions (see the Red Book) and the Sylvian fissure, a region discovered by that time to produce hallucinogenic visions and ‘paranormal’ perceptions when electrically stimulated and, presciently in 2006, to generate what neurologists called an ‘illusory shadow person’ or doppelgänger phenomenon; themselves highly charged and recurring Bowie archetypes (Penfield [7] 1955; Arzy et al., 2006[8]). Stark notes another song on that album "Oh You Pretty Things" sings of the hallucinatory spectre of .."a crack in the sky and a hand reaching down to me", evoking the iconic imagery of Michelangelo's painting The Creation of Adam. Intriguingly she observes that the American Medical Journal reported that Michelangelo's Sistine Chapel portrait of God appears to conform deliberately to the neuro-anatomical shape of the brain, its Sylvian fissure clearly evident, suggesting Michelangelo may have intentionally conflated theology with neurology ([9] Meshberger 1990: 1837).