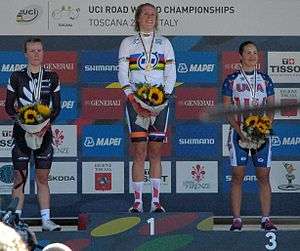 Linda Melanie Villumsen Serup (born 9 April 1985 in Herning) is a Danish-born road racing cyclist[2] who became a New Zealand citizen in 2009 and has ridden under a Kiwi licence from 2010.[3]

At the 2008 Summer Olympics in Beijing she finished 5th in the women's road race and 13th in the time trial.

At the 2012 Summer Olympics in London she finished 18th in the road race and fourth in the time trial, missing out on a medal by less than two seconds.[5]

At the 2014 Commonwealth Games she won the gold medal in the road time trial and placed 5th in the road race.[6][7]

In September 2014 the UnitedHealthcare Women's Team announced that they had signed Villumsen for the 2015 season after two seasons with Wiggle-Honda.[1]

In September 2015 Villumsen won the individual time trial at the UCI Road World Championships in Richmond, Virginia.[8] Afterwards, her trade team, UnitedHealthCare, almost dropped her for riding her team issue New Zealand frame instead of her normal Wilier Cento Time Trial bike.[9] The NZ teams bike, with its altered geometry, meant she could get much lower.

Villumsen is the only New Zealand senior cyclist to win an individual medal at the UCI Road World Championships. Villumsen's long term partner is retired English cyclist Emma Trott, who in turn is the elder sister to Olympic Gold medallist Laura Trott.[10]