This name uses Eastern Slavic naming customs; the patronymic is Ivanovich and the family name is Yashin.

Lev Ivanovich Yashin (Russian: Лев Ива́нович Я́шин, 22 October 1929 – 20 March 1990), nicknamed the "Black Spider" or the "Black Panther", was a Soviet-Russian football goalkeeper, considered by many to be the greatest goalkeeper in the history of the game.[2] He was known for his athleticism in goal, imposing stature and reflex saves.[3] He was also deputy chairman of the Football Federation of the Soviet Union.

Yashin earned iconic status for revolutionizing the goalkeeping position by stamping his authority on the entire defense.[3][4] He shouted orders at his defenders, came off his line to intercept crosses and also ran out to meet onrushing attackers, done at a time when goalkeepers spent the 90 minutes standing in the goal waiting to be called into action.[3][4] His performances made an indelible impression on a global audience at the 1958 World Cup, the first to be broadcast internationally. He dressed head to toe in black, thus earning his nickname the 'Black Spider', which enhanced his popularity.[3][4]

Yashin appeared in four World Cups from 1958 to 1970, and in 2002 was chosen on the FIFA Dream Team of the history of World Cups. In 1994 he was chosen for the FIFA World Cup All-Time Team, and in 1998 was chosen a member of the World Team of the 20th Century. According to FIFA, Yashin saved over 150 penalty kicks in professional football – more than any other goalkeeper.[5] He also kept over 270 clean sheets in his career, winning a gold medal at the 1956 Olympic football tournament, and the 1960 European Championships.[6] In 1963, Yashin received the Ballon d'Or, the only goalkeeper ever to receive the award.[3] He was voted the best goalkeeper of the 20th century by the IFFHS.[7]

Yashin was born in Moscow to a family of industrial workers. When he was 12, the Second World War forced him to turn to factory work to aid in the war effort. However his health at the age of 18 meant he was unable to work.[8] Thus, he was sent to work in a military factory in Moscow, where he played for its football team. It was there that he was spotted and invited to join the Dynamo Moscow youth team.

Yashin’s debut for Dynamo came in 1950 in a friendly match. It was not the debut he would have hoped for, as he conceded a soft goal scored straight from a clearance by the opposing keeper. That year he played in only two league games, and did not appear in a senior match again until 1953. But he remained determined, and stayed at Dynamo in the reserves waiting for another opportunity. Yashin also played goalie for the Dynamo ice hockey team during those early years of trying to break into the senior squad. He managed to win a USSR ice hockey cup in 1953 and was third in the USSR ice hockey championship as goalkeeper.

He spent his entire professional football career with Dynamo Moscow, from 1950 to 1970, winning the USSR football championship five times and the USSR Cup three times. Yashin’s club team-mate, rival and mentor was Alexei "Tiger" Khomich, the keeper of the Soviet national team, who had become famous for his role in Dynamo Moscow’s British tour. He also internally rivalled goalkeeper Walter Sanaya, who left the club in 1953.

Lev Yashin was first-class, a real super goalkeeper. His positional play was excellent, but everything he did was top-class. He was the model for goalkeeping for the next 10 to 15 years, without a doubt. I visualised myself doing some of the things he was doing, even though I was already playing in the top division I used to learn from him.

Yashin was "the peerless goalkeeper of the century".

The 1958 World Cup, played in Sweden, put Yashin on the map for his performances, with the Soviet Union advancing to the quarter-finals. In a group stage match against the eventual Cup winners Brazil, which the Soviet team lost 2–0, Yashin’s performance prevented the score from becoming a rout.[12] He was selected into the All-Star Team that World Cup.

In 1962, despite suffering two concussions during the tournament, he once again led the team to a quarter-final finish, before losing to host country Chile.[13] That tournament showed that Yashin was all too human, having made some uncharacteristic mistakes. In the game against Colombia, which the Soviet Union was leading 4–1, Yashin let in a few soft goals, including a goal scored by Marcos Coll directly from a corner kick (the first and the only goal scored directly from a corner in FIFA World Cup history). The game finished in a 4–4 tie, which led the French newspaper l'Equipe to predict the end of Yashin’s career.[14] He did, however, make an outstanding save against Chile in the Quarter-Final. Despite this, the Soviet Union suffered a 2-1 defeat and were eliminated from the World Cup.

Despite the disappointment of the 1962 World Cup, Yashin would bounce back to win the Ballon d'Or in 1963. One of his best performances that year was the FA Centenary match, when he appeared in the ‘Rest of the World XI’ against England at Wembley Stadium, and made a number of breathtaking and almost unbelievable saves. From that point onward he was known all over the world as the "Black Spider" because he wore a distinctive all-black outfit and because it seemed as though he had eight arms to save almost everything.[3][4] But to his fans, he was always the fearless "Black Panther". He often played wearing a cloth cap of burnt-brick colour. Yashin led the Soviet team to its best showing at the FIFA World Cup, a fourth-place finish in the 1966 World Cup held in England.

Always ready to give advice to his comrades, Yashin even made a fourth trip to the World Cup finals in 1970, held in Mexico, as the third-choice back-up and an assistant coach. The Soviet team again reached the quarter-finals. In 1971, in Moscow, he played his last match for Dynamo Moscow. Lev Yashin’s FIFA testimonial match was held at the Lenin Stadium in Moscow with 100,000 fans attending and a host of football stars, including Pelé, Eusébio and Franz Beckenbauer.[3]

After retiring from playing, Yashin spent almost 20 years in various administrative positions at Dynamo Moscow. A bronze statue of Lev Yashin was erected at the Dynamo Stadium in Moscow.[15]

In 1986, following a thrombophlebitis contracted while he was in Budapest, Yashin underwent the amputation of one of his legs.[15] He died in 1990 of stomach cancer, despite a surgical intervention in an attempt to save his life. He was given a state funeral as a Soviet Honoured Master of Sport.[15]

Yashin was survived by wife Valentina Timofeyevna and daughters Irina and Elena.[16] His grandson Vasili Frolov played as a goalkeeper for Dynamo.[17]

Yashin remains the only goalkeeper to have won the Ballon d'Or Award, which he received in 1963.[3] He also stopped 151 penalty kicks during his career, far more than any other goalkeeper in history, and kept over 270 clean sheets.[6][15] For his outstanding service to the people and to his country, Yashin was awarded the Order of Lenin in 1967, the highest award of the USSR.[3]

Yashin would always organise the defensive game of his team, often so fiercely that even his wife accused him of yelling too much on the pitch. He rarely captained his teams, as the accepted custom of appointing a goalkeeper captain was virtually unheard-of in that era, but his leadership on the field was always evident. Yashin was one of the goalkeepers that began the practice of punching balls out in difficult situations instead of trying to catch them. Other novel practices he developed were the quick throw of the ball to begin a counterattack, coming out of the penalty area to anticipate danger, and the command and organisation of the defenders – practices now quite common among goalkeepers.[3] When asked what his secret was, he would reply that the trick was "to have a smoke to calm your nerves, then toss back a strong drink to tone your muscles."[15]

In 1994, FIFA established the Lev Yashin Award for the best goalkeeper at the World Cup finals. FIFA polls named Yashin as the sole goalkeeper in World Team of the 20th Century. World Soccer Magazine named him in their The 100 Greatest Players of the 20th century. Many commentators still consider Yashin the best keeper in the history of football, which resulted in the fact he was chosen to be the goalkeeper in most of the world-all-time teams ever written (including the FIFA World Cup All-Time Team and the FIFA Dream Team).[18] 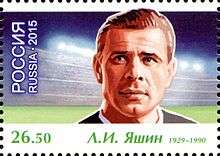 Yashin on a 2016 Russian stamp from the series "Football Legends" 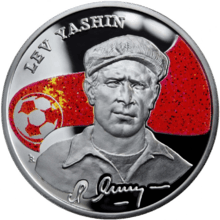 Commemorative coin issued in 2008 by the Central Bank of Armenia 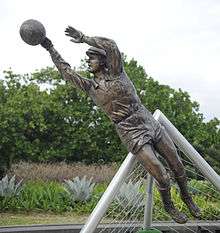 The following works are devoted to Yashin:

"What kind of a goalkeeper is the one who is not tormented by the goal he has allowed? He must be tormented! And if he is calm, that means the end. No matter what he had in the past, he has no future."
— Lev Yashin

"The joy of seeing Yuri Gagarin flying in space is only superseded by the joy of a good penalty save."
— Lev Yashin

"There have only been two world-class goalkeepers. One was Lev Yashin, the other was the German boy who played for Manchester City."
— Lev Yashin on Bert Trautmann

"Yashin plays football better than me"
— Sandro Mazzola after a 1963 Italy-USSR match, where Yashin saved a penalty.