This article is about the men's team. For the women's team, see Chile women's national football team.

The Chile national football team (Selección de fútbol de Chile) represents Chile in all major international football competitions and is controlled by the Federación de Fútbol de Chile which was established in 1895. The team is commonly referred to as La Roja ("The Red One").[3][4][5] They have appeared in nine World Cup tournaments and were hosts of the 1962 FIFA World Cup where they finished in third place, the highest position the country has ever achieved in the World Cup. Since the mid to late 1960s, the Elo ratings ranks Chile among the 25 strongest football teams in the world.

Chile are the reigning Copa América champions; after winning 2015 Copa América on home soil, it successfully defended their title in the United States in the Copa América Centenario in 2016. Prior to this, Chile had been runners-up in the competition on four occasions. As a result of winning the 2015 Copa América, they qualified for the 2017 FIFA Confederations Cup.

The Federación de Fútbol de Chile is the second oldest South American federation, having been founded in Valparaíso on June 19, 1895.[7]

Chile is one of the four founding member nations of CONMEBOL. Together with Argentina, Brazil, and Uruguay, the four competed in the first South American Championship, later to be renamed the Copa América, in 1916. On October 12, 1926, Chile made the first corner-kick goal in Copa América history in a match against Bolivia.

Chile was one of the thirteen national teams that competed in the inaugural World Cup in 1930. The team started off well, beating Mexico and France without conceding a goal. A 3–1 loss to Argentina in the final game left the Chilean team in second place within the group, eliminating it from the tournament. In the 1950 World Cup, Chile defeated the United States, 5–2, but nevertheless was eliminated in the first round. 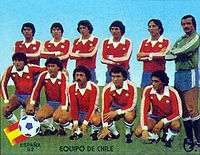 The Chilean national team in 1982.

The best Chilean result in the World Cup was third place in 1962, as the host nation. Chile lost 4–2 to eventual champion Brazil in a semi-final but went on to defeat Yugoslavia 1–0 to earn third place. Chilean players made two World Cup firsts: the first player to miss a World Cup penalty kick was the Chilean Guillermo Subiabre, in a 1930 FIFA World Cup match against France,[8] and Carlos Caszely of Chile became the first player to be sent off with a red card, during a match against West Germany at the 1974 World Cup.

On July 19, 2007, the Chilean Football Federation banned six of the national team players, because of "internal indiscipline" during the Copa América tournament, for 20 international matches each and none of the players will ever be allowed to captain the national team. The players banned were captain Jorge Valdivia, defenders Álvaro Ormeño, Rodrigo Tello, Jorge Vargas, Pablo Contreras and striker Reinaldo Navia.[9] Nelson Acosta's resignation as manager came after Chile were knocked out of the 2007 Copa América. Chile had qualified to the quarter-finals after a 3–2 win against Ecuador, and a 0–0 draw against Mexico. But two losses, one of those being a 6–1 defeat against Brazil, sealed Acosta's fate. Former Argentina manager Marcelo Bielsa was given the task of becoming the Chile national team manager in preparation for the 2010 World Cup qualifiers.[10]

On October 16, 2008, Chile beat Argentina 1–0 for the first time in a qualifying competition, making history. Marcelo Bielsa was acclaimed for this accomplishment by both Chilean and Argentinian people. This match was seen as one of the reasons that ended Alfio Basile's tenure as Argentina's coach.

After finishing in second place of the CONMEBOL qualifiers for the 2010 FIFA World Cup held in South Africa and reaching the round of 16 at the tournament, head coach Marcelo Bielsa extended his contract with the Chilean national team until 2015. Bielsa stated that he would leave his position if Jorge Segovia were elected as President of the Chilean Football Board. He followed through on this threat, despite Segovia's election being annulled, and resigned in February 2011. Claudio Borghi then became Chile's manager in March 2011.

After a string of bad performances and harsh criticisms, Claudio Borghi stepped down as Chile's manager in November 2012. A new manager, Jorge Sampaoli, was appointed in December 2012. A disciple of Marcelo Bielsa, Jorge Sampaoli broke new records for La Roja by winning 10, drawing 3, and losing only 3 of 15 games as the head of the Chilean national team.

With Sampaoli, Chile were able to qualify for 2014 FIFA World Cup, reaching to the round of 16, where Chile lost to Brazil in penalties.

In the 2015 Copa América, Chile won their first game against Ecuador, with 2–0 being the score. In their second game, Chile drew against Mexico. Chile advanced to the knockout stage as Group A winners with 7 points and most goals scored of any team in the tournament (10). Then they beat Uruguay in the quarterfinals and Peru in the semifinals. In the final, Chile defeated Argentina on penalties (4–1) after a 0–0 draw, to win their first Copa America title.

In January 2016, just six months after winning the 2015 Copa America, Jorge Sampaoli stepped down as Chile's manager.[11] A new manager, the argentinean Juan Antonio Pizzi, was appointed at the end of the same month.[12]

The team kit consists of a red jersey, blue shorts, and white socks. The away jersey features a white jersey, white shorts, and blue socks. The color scheme of red, white, and blue that was featured in the 1947 South American Championship, the precursor of the Copa América, has remained in place since. In 2016, red shorts were introduced as an option for the first time.

In August 2010, Puma acquired the contract to be the official kit supplier for the Chilean team from 2011–2015, paying US$ 3 million per year, also providing referees' kits and balls for domestic club competitions. The previous kit supplier, from 2004 to 2010 including the 2010 World Cup, was Brooks Sports [13]

Puma company ended its link after the Copa America 2015 with the tender for the new brand that will outfit the team since August 2015. This procedure was won by the American company Nike. Thus, the brand will be responsible for all the costumes of the selection once the Copa America ends. The contract with Nike last until the 2022 FIFA World Cup.[14] 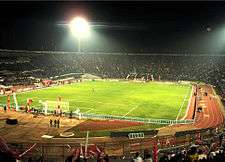 The Chilean national team plays their qualifying matches at the Estadio Nacional Julio Martínez Prádanos located in Santiago, Chile and can be found at the commune of Ñuñoa. The construction of the stadium began in February 1937, and opened on 3 December 1938. The current official registered capacity is of 49,000 spectators, but has surpassed the 75,000 mark on many occasions when the match is of high demand.[15] An example would be the 1962 FIFA World Cup semi-final match Chile vs. Brazil, where over 76,000 spectators viewed the game. The maximum attendance ever was 85,262 on December 26, 1962, for a game between Universidad Católica and Universidad de Chile.

It has hosted four Copa América finals, the final of the 1962 FIFA World Cup and the final to the 1987 FIFA World Youth Championship. 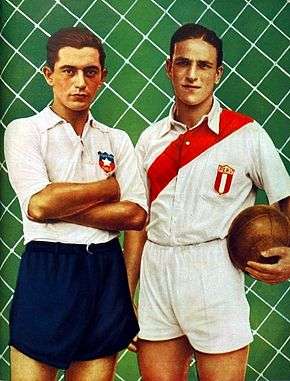 Chile's main football rivalry is with neighbouring Argentina. Although historically it has been a one sided rivalry, with Argentina winning the majority of times, that has changed in recent years with Chile winning consecutive Copa Americas against Argentina. Due to historic reasons and their shared border, Chilean fans will always consider games against Argentina as the most exciting.

Chile maintains a rivalry with neighbouring Peru. The Chile–Peru football rivalry is known in Spanish as the Clásico del Pacífico ("Pacific Derby").[16] CNN World Sport editor Greg Duke ranks it among the top ten football rivalries in the world.[17] Chile first faced Peru in the 1935 South American Championship, prevailing 1–0.[18][19] They also both claim to have invented the bicycle kick; Peruvians call it the chalaca, while it is the chilena in Chile.[20] The rivalry has died down in recent years as Chile has become one of the strongest teams in South America while Peru has become one of the weakest.

The following players have been called up in the last twelve months.