The Liga Nacional de Básquet (abbreviated LNB, and literally in English "National Basketball League") is the top level of the Argentine basketball league system. The league is controlled by the Basketball Clubs' Association (in Spanish: Asociación de Clubes de Básquetbol). The LNB's predecessor is the defunct Campeonato Argentino de Clubes, organized by the Argentine Basketball Federation.

The league was created through the efforts of coach León Najnudel and sports journalist Osvaldo Orcasitas in the 1980s to make Argentine basketball more competitive through the merging of the many existing local leagues.[1] It is designed like the NBA, with regular season, all-star game, and playoffs. However, unlike the NBA, the LNB has promotion and relegation with the Torneo Nacional de Ascenso (TNA), the league immediately below.

A tribute to Najnudel's vision is the string of successes of the Argentine national basketball team, culminating with the team's Olympic gold medal won at the 2004 Summer Olympics, and the international careers of many players who started in the league. 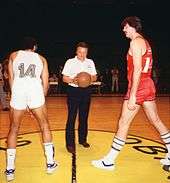 Ferro C. Oeste, the first champion of the LNB.

Before the league was established, the regular tournament was Campeonato Argentino de Clubes where teams from all the provinces took part. The league had a regional format and playoffs.

For the 1984 edition there was 64 teams. The association decided to retire 10 teams, moving them to "Primera Nacional A".[2] Of those teams, 4 were from city of Buenos Aires, and the provinces of Buenos Aires, Córdoba and Santa Fe were represented by 2 teams each.

As a result, a number of 54 teams played the Argentino de clubes. At the end of the tournament, the six best placed team would promote to Primera A, and the rest of the clubs would be relegated to Primera B (second division).[3]

The first edition of Liga Nacional was played within 1985, with 16 teams participating although Independiente de Tucumán abandoned the championship for economic reasons. The first game was played on April 26, 1985,[4] when San Lorenzo de Almagro faced Argentino de Firmat at Estadio Obras Sanitarias.

Ferro Carril Oeste was the first LNB champion after defeating Atenas de Córdoba in 3 games. The next season (1986), Ferro Carril Oeste won its second consecutive title, beating Olimpo de Bahía Blanca in 5 games (3-1 on aggregate). The Verdolaga played its third consecutive final series in 1987, but was finally defeated by Atenas, that won the first of 9 titles, being the most winning LNB team to date.

In 1988 Atenas won a second championship beating River Plate and the next year Ferro won another title, being the only title won by León Najnudel as coach.

Following a system similar to the European basketball leagues, there are two leves of competition: the Liga A (first division) and the Torneo Nacional de Ascenso (National Promotion Tournament in English ") or TNA (second division). Both tournaments feature promotions and relegations and are organized by the Clubs Association of Argentina. On the 2011–12 season a third level of competition was inaugurated, the Torneo Federal de Básquetbol,[5] which encompasses a wide array of teams from all over the country and is organized by the Argentine Basketball Federation. An additional short tournament between the top seven teams in the first division and a wild card takes place before the start of the regular season.

The top tier of the league consists of 16 teams, which are later divided into two Divisions, North and South, according to their geographical location. The regular season is divided in two stages: the first stage consists of a double round-robin between teams on the same Division only, with standings decided by a points system. On the second stage, each team carries over 50% of the points obtained in the first stage and a new double round-robin starts, this time between all 16 teams. After the regular season ends, the standings determine different outcomes which are as follows:

The Championship Playoffs follow a tournament format, where each team plays against the opponent in a best-of-five series in the quarterfinals and semifinals, and a best-of-seven series in the finals.

The TNA consists of 21 teams, which are divided into two Divisions, North and South, with 10 teams going to the North Division and 11 teams going to the South Division. The competition format is similar to the Liga A, with a regular season divided in two stages. On the first stage, teams from the same division compete in a double round-robin format, with standings determined by a points system. After the first phase each team carries over 50% of the points obtained to the second stage. On the second stage, each division is split into two groups as follows: the top five teams from the North Division (TNA1 North), the top six teams from the South Division (TNA1 South), and the remaining teams from the North and South groups (TNA2 North and TNA2 South, respectively). Each group then competes in a separate double round-robin.

There are six numbers retired in the LNB to date. Atenas was the team which started this practise (in 2002, with the legendary Marcelo Milanesio's #9), being Peñarol de Mar del Plata the most recent case of retiring a jersey, with the #8 worn by "Tato" Rodríguez.[8][9]

1 Although Cortijo never played for the club, the #11 jersey was retired honoring him as a native of Santiago del Estero, where Quimsa is located in.