Club Atlético River Plate is an Argentine sports club based in the Núñez neighborhood of Buenos Aires, and named after the city's estuary, Río de la Plata. Although many sports are practiced at the club, River is best known for its professional football team, which has won the most domestic competitions in Argentina with 44 titles in Primera División and 2 second division championships.[4] At international level, River Plate has won a total of 16 official titles, ten of them organized by CONMEBOL.[4] Since its establishment in 1901, River Plate summarizes 60 titles won in the top division and 2 Segunda División championships.

In a recent survey[5] published by the Argentine Football Association, 6 out of 11 players of the all-time Argentine national team had played for River Plate.

Additionally, in 2000, River Plate was honored by FIFA as the 9th best club of the century in the world and the best Argentine football club in that ranking.[6]

In addition, River Plate's reserve team won the U-20 Copa Libertadores in 2012.

Among other achievements, River Plate is at the top of the list in the All-time Argentine Primera División table, being the Argentine team with most won games, least defeated games, most points accumulated, most goals scored, least goals against and best goal difference since the first championship held in 1891.

River Plate is the first and only team to simultaneously hold CONMEBOL's four current major international competitions,[18][19] after winning the 2014 Copa Sudamericana, 2015 Recopa Sudamericana, the 2015 Copa Libertadores,[20] and the 2015 Suruga Bank Championship.[18]

In 2000, River Plate was named by FIFA as the 9th club of the century and it was the best Argentine football club in that ranking.[6] In 2010, the International Federation of Football History and Statistics placed River Plate in the 9th place in a ranking that included the best teams of the world during the 1990 and 2000 decades. River was the South American club with the best position in the table.[21]

The club was officially founded in 1901 and took its name from the common English name for the Río de la Plata. River has a fierce rivalry with Boca Juniors. Matches between them are known as Superclásico, and the two teams' rivalry is amongst the most heated in the sport, due to their local and global popularity. River's home stadium is Estadio Monumental Antonio Vespucio Liberti, known simply as El Monumental, which is the largest stadium in the country.

The team that achieved the promotion to first division in 1908.

River Plate was founded on 25 May 1901, close to the La Boca neighborhood (later the home of fierce rivals Boca Juniors). The institution was formed after the merger of two clubs, "Santa Rosa" and "La Rosales", with Leopoldo Bard being elected as its first president. The name was chosen because of an incident during the construction of Buenos Aires Port: one of the members had seen how the workers of Dique nº 3 left their duties for a while to play a football match. The boxes they were working with just said "The River Plate" (the name the English gave to the Río de la Plata) and that 'enigmatic' inscription was taken to name the new club.

River Plate affiliated to the Argentine Football Association in 1905, debuting in the third division against Facultad de Medicina. On 13 December 1908, the team was promoted to first division after beating Racing Club 2–1. However, the match was declared null due to River supporters jumping onto the field to celebrate with the players, so a new match had to be played. River again won (7–0) to achieve promotion.

In 1914 River won its first domestic championship, the Copa de Competencia Jockey Club[23] and its first international title, the Tie Cup. The nickname Los Millonarios came after the acquisition of winger Carlos Peucelle in 1931 for $10,000 and Bernabé Ferreyra for $35,000 (Large sum of money for the period) in 1932.

In the following years, River Plate consolidated its place as one of the most popular teams of Argentina.

River Plate and Boca Juniors are the two largest football clubs in Argentina, with more than half the country's football fans supporting the clubs. Due to the rivalry between them, the Boca Juniors vs River Plate Superclásico local derby match was listed by the BBC as one of the most famous derbies in the world.[30] It was also acclaimed as number one of the Fifty sporting things you must do before you die by The Observer newspaper.[31] 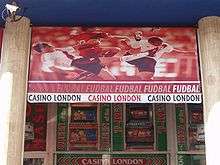 The "River Plate" name was chosen in 1901, when the team was still located at the La Boca neighbourhood, next to the Río de la Plata ("River Plate" in some English sources). Proposed names as "Club Atlético Forward", "Juventud Boquense" or "La Rosales" had been rejected. Pedro Martínez saw the name "The River Plate" written at ship containers, and proposed it as a name, which was finally accepted as the official name.[32]

River fans and the press are fond of the nickname Los Millonarios. This name derives from the 1930s after some expensive transfers of players from other clubs, including Carlos Peucelle from Sportivo Buenos Aires in 1931 and Bernabé Ferreyra from Tigre in 1932. Between 1979 and 1981, the River squad was reputed to be amongst the most expensive in the world.

When Hugo Santilli become chairman in 1984, he soon called to a competition where a new emblem would be chosen. The main objective of this new image was to eradicate the nickname Gallinas (Chicken) that River's rivals (Boca Juniors fans mainly) used to mock them. Some of the most important artists from Argentina took part in that competition so the club finally chose a logo designed by the famous artist Caloi. This emblem showed the figure of a lion (wearing a River jersey) raising from the Monumental stadium. The lion logo was immediately added to the uniforms (on the field and training clothes) having River Plate won the Copa Libertadores and Intercontinental Cup using the lion logo. In 1989, when Santilli left the club so the lion went with him and has not been reestablished since.[33]

Due to the red band in their shirt, it is also common to refer to River as El Equipo de la Banda (the team with the band) or simply La Banda (which also means "the band" -both as in "gang" and "musical group"). Some famous River teams earned nicknames, notably La Máquina (the machine), the team that astonished Argentine football between 1941 and 1945.

In 1996 and 1997, during a run of title wins (three Argentine titles, one Copa Libertadores and one Supercopa), River were sometimes called La Maquinita ("The Little Machine") by the press. That team featured Francescoli and younger players such as Juan Pablo Sorín, Hernán Crespo, Ariel Ortega, Marcelo Salas and Marcelo Gallardo. 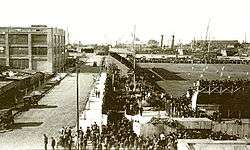 The stadium built by River Plate in La Boca. The club played its home games there from 1915 to 1923.

The Estadio Antonio Liberti (nicknamed El Monumental) placed in Belgrano neighborhood of Buenos Aires is River Plate's stadium. With a capacity of 65,645, it was inaugurated on 25 May 1938. The Argentina national football team usually plays its home games at the stadium.

Since its establishment in 1901, River Plate stadiums has been:[34] 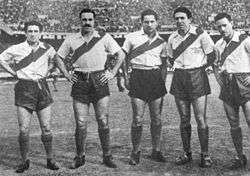 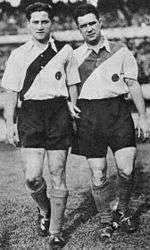 Héctor Veira won the Copa Libertadores with River Plate, in 1986. That same year the team won the Intercontinental played in Tokyo. Under his coaching the club also won the 1985–86 Argentine championship, totalizing three titles with River Plate.

The women's field hockey team is affiliated to the Buenos Aires Hockey Association (AHBA)[45] and currently playing in Torneo Metropolitano A, the top division of regional hockey in Argentina.

The basketball team currently plays in the amateur Buenos Aires league. The club won a Campeonato Argentino title in 1983, then playing at its successor competition, Liga Nacional de Básquetbol, between 1985–93 and 2004–06. The team reached the finals in 1988 and achieved 2nd place in 2004 and 2005 editions of Copa Argentina, but in July 2006 the club got expelled by the League because of a debt in player's salaries.

River Plate also has professional male and female handball and volleyball teams in regional and national competitions, including participation in the Pan American Men's Club Handball Championship, in which River Plate has won four bronze medals.