Not to be confused with Hong Kong Tramways. 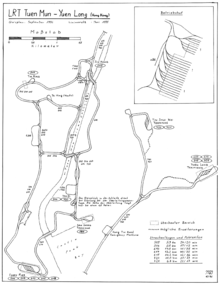 The Light Rail, also known as the Light Rail Transit (LRT), is a light rail system in Hong Kong, serving the New Territories West, within Tuen Mun District and Yuen Long District. The system operates over 1,435 mm (4 ft 8 1⁄2 in) standard gauge gauge track, using 750 V DC overhead power supply. It was once one of four systems comprising the KCR network in Hong Kong. It has a daily ridership of about 473,000 people.[1]

When Tuen Mun was developed in the 1970s, the Hong Kong government had set aside space for the laying of rail tracks. There was uncertainty however as to which company would be commissioned to build the train line. In 1982 Hong Kong Tramways showed interest in building the system and running double-decker trams on it, before abandoning the project after negotiations over land premiums for related property development failed.[2] The government sought another builder. The Mass Transit Railway Corporation (MTRC) was "heavily indebted" at the time, and so Secretary for Transport Alan Scott invited the Kowloon–Canton Railway Corporation (KCRC) to consider the project instead.[3][4] The KCRC announced they would build the system in 1984 to a budget of $1.5 billion, after investigating ways to improve commercial viability.[5] After some research, construction commenced on 14 July 1985.

By that time, Kowloon Motor Bus (KMB) had developed its own network in Tuen Mun and Yuen Long, and there were about 10 routes serving within the district internally, most of them profitable. However, the government introduced the concept of the "Light Rail Service Area" in both districts, forcing the KMB to withdraw all internal bus services in favour of the Light Rail. It also forced the KMB to impose boarding and alighting restrictions for external routes. It was decided that services between town centres and settlements would be provided solely by the Light Rail, while feeder buses operated by the KCRC would connect remote sites to the network, replacing KMB's equivalent services where applicable.

The system was completed and fully operational in September 1988. The first section was opened to the public on 18 September 1988, with free rides Tuen Mun and Yuen Long; normal, all-day service began four days later, on 18 September.[6] The system consisted of two large and three small loops serving most of the public housing estates in northern Tuen Mun. Three branches: one to On Ting Estate in the southeast, one to the Tuen Mun Ferry Pier in the southwest and another northern branch all the way into the town of Yuen Long along Castle Peak Road. It was then known as Light Rail Transit or LRT and is also called as the North-west Railway according to the Kowloon–Canton Railway Corporation Ordinance and Mass Transit Railway (North-west Railway) Bylaw.[7][8]

The system is divided into six fare zones, the only transit system in Hong Kong to employ such zoning. The feeder buses have fares independent of these zones, but provide discounts when passengers interchange between these buses and LRT. 70 single-deck LRVs were manufactured in Melbourne and Brisbane, Australia by Comeng, and shipped to Hong Kong for the seven LRT routes in the system. Three of the routes were to Yuen Long and the others were confined to Tuen Mun.

The system's first extension came for the southern and eastern parts of Tuen Mun. The eastern extension branches off the main line south of Siu Hong Stop and crosses the river that runs through Tuen Mun immediately with a flyover. The line then runs along Castle Peak Road to a road north of the town centre, where it climbs to another flyover and rejoins the main route. The northern end of this extension is still the only non-triangular junction in the entire system.

The southern extension mainly consists of a route linking On Ting and Ferry Pier, on the newly reclaimed land near the river mouth of Tuen Mun River, known as "Mouse Island" by locals. A short spur was also built from the extension to another terminus at Sam Shing Estate, located near Castle Peak Bay. Three LRT routes were diverted (route 505 was extended to Sam Shing) and one feeder bus route (route 559) discontinued as a result of these changes.

Tin Shui Wai was originally an area with numerous fish ponds, but was developed as a residential town in 1991-1994. With the increase of internal commuter traffic demand, an LRT spur was built north of Hung Shui Kiu Stop that opened in 1993, with four stops serving the initial housing areas of the town. The area was further developed in the next few years and the line was extended by two stops: Chestwood and Tin Shui Wai Terminus in 1995 (Tin Shui Wai Terminus was renamed Tin Wing after the opening of West Rail Line). Two LRT routes were established, route 720 to Yau Oi and route 721 to Yuen Long.

The system remained essentially unchanged until the completion of the West Rail Line in December 2003. Many changes were made, mainly around the new railway stations. The KCRC designed most railway stations in the LRT area to interchange with the new West Rail line. The idea was to encourage passengers to use the West Rail Line instead of the Light Rail for longer journeys to free up LRT vehicles for passengers making shorter journeys. For this purpose, an interchange discount system was launched with the introduction of the West Rail Line system, meaning that passengers would pay no more (and in some cases less) to travel on West Rail Line instead of the LRT for the main part of their journey. Although this most recent extension is the largest ever, no new vehicles were purchased. And although rearrangements were made, some infrequent and unreliable services resulted, causing passengers to blame the lack of vehicles and poor arrangement of new services.[9] The KCRC has since modified the inside of some vehicles to allow more standing room for passengers during peak hours. They have also several route alterations to arrange them better.

The system's vehicles consist of four different types of LRVs. All LRVs are 20.2 metres long and have 3 sliding doors fitted on the left side (when facing the running direction from inside). This means that island platforms (except the triangular platform at Siu Hong Stop) cannot be used at all in the LRT system.

Traction systems for both Phase I and II LRVs consist of GTO thyristor chopper and DC traction motors, supplied by AEG, while drives for the Phase three and four LRVs consist of IGBT VVVF inverters and AC traction motors provided by Mitsubishi. The maximum speed for all LRVs is 80 km/h, although they rarely reach that speed because of the many grade crossings between stops and the close proximity between stops in Tuen Mun, Yuen Long and Tin Shui Wai.

From the outside it is difficult to differentiate between the first three types of LRVs. There are, however, distinct features that one can use to tell them apart; Phase III LRVs still retain their original green electronic displays while all other LRVs have new orange electronic displays. Phase I cars also have a wide window at the rear that can be opened in case of an emergency, while Phase II cars have a door at the back. The interior of the phase three cars has a greenish look and the doors are also green. The Phase IV LRVs have a completely different appearance in contrast to the older phase. It has a white exterior livery with olive green and purple line on the side. The shape of the front of the LRV is more streamlined than the older phases. The door opening and closing mechanism was similar to the ones from the K-class cars used in the Tseung Kwan O line and Tung Chung line. The Phase IV has 3 surveillance cameras in each vehicle. Seat belts and wheelchair positions were also available in the Phase IV. On older-generation LRVs there is a poach seat but the Phase IVs do not maintain this feature. The Phase IV LRV has orange electronic display. The refurbished Phase I LRVs have rounded rectangular windows while Phase IV LRVs have square ones.

The Phase II and III cars are expected to be rebuilt and repainted with a scheme similar to the Phase IV cars.

There are currently 12 routes serving the Light Rail system:

The Light Rail is the only public transport system in Hong Kong to have fare zones and the only one with an honour system, in which there are no ticket gates. These fare zones apply only to passengers purchasing single-ride tickets from ticketing machines at LRT stops. Since the introduction of Octopus cards, however, passengers have a choice of ticketing options. All fares indicated below are for adults, while children and the elderly usually pay the concessionary fare, which is half the adult fare.

There are six fare zones – 1, 2, 3, 4, 5 and 5A – for passengers purchasing single-ride tickets in Light Rail stops. A trip between two zones costs HK$4.5, HK$5.5 for three zones and journeys further than three zones costs HK$6.5. Zone 5A was introduced solely for the latest extension in Tin Shui Wai, and both zones 5 and 5A are only connected to Zone 4. Therefore, travelling between zones 5 and 5A is considered as travelling through three zones.

Octopus card fares are calculated based on the minimum number of stops travelled (from origin to destination stops), rather than the number of fare zones travelled through. All stops have Octopus entry and exit processors at the entrances to and exits from platforms. Passengers may enter the system after placing their Octopus on the reader of an orange-coloured 'Entry Processor' reader. This action is known as validation. At this point, The maximum fare is deducted from the Octopus. On completion of a journey, the card previously read by an 'Entry Processor' must be placed on a dark-green coloured 'Exit Processor', where the maximum fare less the fare incurred is refunded. Failure to do so within the time limit would cause the fare difference to be forfeited. As a side note, if a person exits the same platform with the same Octopus card with 5 minutes, the fare deducted will be fully refunded.

Found on most platforms, there is also the 'Enquiry Processor', light-blue in colour. Like enquiry processors found in other places, passengers can check the balance on their card, along with the 10 most recent Octopus transactions. If a Personalised Octopus Cards is used, the number of Light Rail credits accumulated is also shown.

Passengers using Octopus that is registered with the MTR Club are automatically enrolled into the MTR Club Bonus Scheme . Members can earn Bonus Points by riding on the MTR, Airport Express, Light Rail and MTR Bus with their registered Octopus during the promotion period. Members can then use the points in exchange for exclusive gift. Passengers can visit the MTR website for the information of the gift during that particular promotion period. [10]

Template:Attached KML/MTR Light Rail
KML is from Wikidata
This article is issued from Wikipedia - version of the 11/26/2016. The text is available under the Creative Commons Attribution/Share Alike but additional terms may apply for the media files.