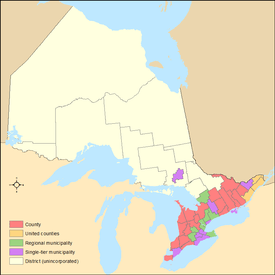 The census divisions of Ontario are used by Statistics Canada to aggregate census data. With two exceptions,[1] they correspond to Ontario's first-level administrative divisions, of which there are three types: single-tier municipalities, upper-tier municipalities (which can be regional municipalities or counties), and districts. These differ primarily in the services that they provide to their residents, and their different structures result from the vast disparities among Ontario's different regions. They may comprise smaller municipalities or other types of administrative divisions, which are generally treated as census subdivisions by Statistics Canada.

In some cases, a census division may retain its historical name even if it changes government type. For instance, Oxford County, Haldimand County, Norfolk County and Prince Edward County are no longer counties: Oxford is a regional municipality and the others are single-tier municipalities. Several census divisions in Ontario have significantly changed their borders or been discontinued entirely: see Historic counties of Ontario.

The following map displays the census divisions of Ontario, except for Haldimand-Norfolk which is displayed as its component Haldimand and Norfolk Counties. Population data is from the 2011 census by Statistics Canada.[2] 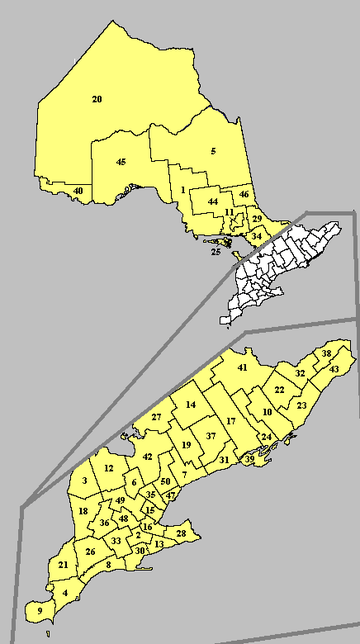 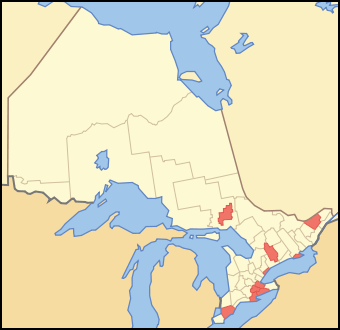 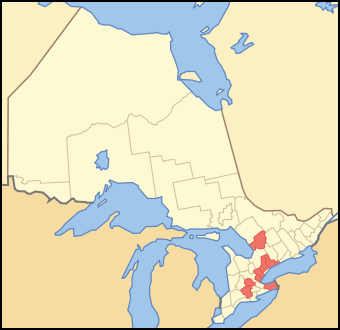 Regional municipalities (or regions) are upper-tier municipalities that generally have more servicing responsibilities than the counties. They generally provide the following services: maintenance and construction of arterial roads, transit, policing, sewer and water systems, waste disposal, region-wide land use planning and development, as well as health and social services. Regions are typically more urbanized than counties. Regional municipalities are usually implemented in census divisions where an interconnected cluster of urban centres forms the majority of the division's area and population, but no single centre is overwhelmingly dominant over the others. Regional municipalities are found only in Southern Ontario.

Although Oxford County and the District Municipality of Muskoka are not called regions, they are defined as regional municipalities under Part 1, Section 1 of the Ontario Municipal Act, 2001.[3] 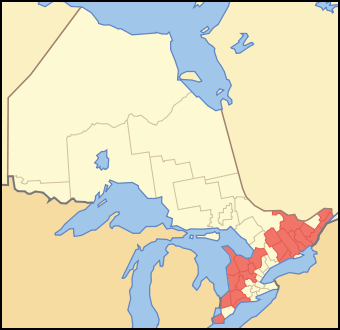 Counties have fewer responsibilities than regions, as the lower-tier municipalities (cities, towns, villages, townships) within the counties typically provide the majority of municipal services to their residents. The responsibilities of county governments are generally limited to the following: maintenance and construction of rural arterial roads, health and social services, and county land use planning. Counties are only found in Southern Ontario.

Counties may be as large as regional municipalities in population, but their population density is generally lower (although not as low as in a district.) Counties may include major cities, such as London, Kingston and Windsor, but these cities have generally not evolved into urban agglomerations with other communities, as in regions and "megacities".

Counties may also include separated municipalities, communities that are considered part of the county for census purposes but are not administratively connected to the county. Municipalities are separated when regional or single-tier status is not appropriate for the municipality's population patterns, but their population is still large enough that it may adversely affect the county's ability to provide services to its smaller communities. 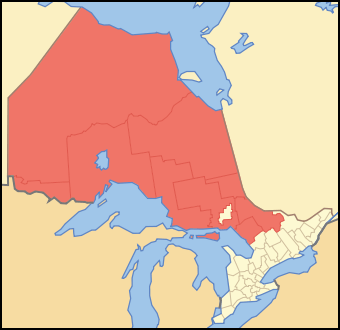 Districts are regional areas in Northern Ontario that do not serve any municipal government purpose. Although districts do still contain incorporated cities, towns and townships, they do not have an upper-tier county or regional municipality level of government, and are largely composed of unorganized areas. Some districts may have District Social Service Administration Boards, which are designed to provide certain social services, but they do not serve a governmental function.

In a district, all services are provided either by the municipalities themselves, by local services boards in some communities within the unorganized areas, or directly by the provincial government. Much of Northern Ontario is sparsely populated, so a county government structure would not be an efficient or cost-effective method of administration.

The former Regional Municipality of Sudbury, created in 1973, was the only census division in Northern Ontario ever incorporated with a structure like those of census divisions in the southern part of the province. That division was dissolved in 2000, and now constitutes the single-tier municipality of Greater Sudbury.

District seats are in brackets. 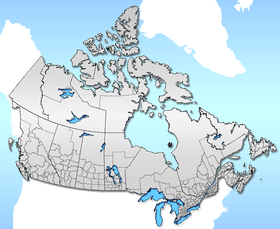 Census divisions by province and territory