This is a list of the colleges and institutes in Madurai district. 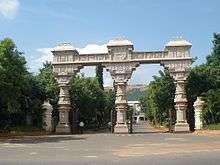 Madurai has been an academic centre of learning of Tamil culture, literature, art, music and dance for centuries.All three assemblies of the Tamil language, the Tamil Sangam (about the 3rd century BC to the 3rd century CE), were held at Madurai. The American College in Madurai is the oldest college in the city and second oldest college in Tamil Nadu, established in 1881 by American Christian missionaries. The Lady Doak college, established in 1948, is the oldest women's college in Madurai. The Madura College (established in 1889), Fatima College (established in 1953) and M.S.S.Wakf Board College (established in 1964) are among the oldest educational institutions of the city. Vivekananda College, Tiruvedakam West, established in 1971, is the only residential college run in the gurukula pattern of education. Madurai Kamaraj University (originally called Madurai University), established in 1966, is the state run university that has 109 affiliated arts and science colleges in Madurai and neighbouring districts. There are 47 approved institutions of the university in and around the city consisting of autonomous colleges, aided colleges, self-financing colleges, constituent colleges, evening colleges and other approved institutions. There are seven polytechnics and five Industrial training institutes (ITIs) in Madurai, with the Government ITI and the Government Polytechnic for Women being the most prominent of them all.Fire and Safety Training Provided by Ideal industrial Training Institute (IITI) Located in Krihsnapuram colony, The government institutes, namely, the Madurai Medical College and the Homoeopathic Medical College, along with the 11 paramedical institutes constitute the medical and paramedical paradigm of Madurai. There are seven engineering colleges in Madurai affiliated to Anna University, with the Thiagarajar College of Engineering being the oldest of all. The Madurai Law College, established in 1979, is one of the seven government law colleges in the state, administered by the Tamil Nadu Government Department of Legal Studies, and affiliated to the Tamil Nadu Dr. Ambedkar Law University. There are three teacher training institutes, two music colleges, three management institutes and 30 Arts & Science colleges in Madurai. The agricultural college and research institute in Madurai, started in 1965, by the state government provides agricultural education to aspirants in the southern districts of Tamil Nadu. There are a total of 369 primary, secondary and higher secondary schools in the city.