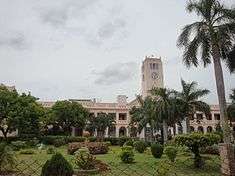 Annamalai University is one of Asia's largest public residential universities located in Annamalai Nagar, Chidambaram, Tamil Nadu, India. The university is spread across 1,500 acres (6.1 km2) in Chidambaram and offers courses of higher education in science, engineering, humanities, agriculture and arts. The university was founded in 1929 by the entrepreneur Annamalai Chettiyar in the aftermath of the Montagu-Chelmsford Reforms. It was the first private University in India.[1] It was taken over by the Tamil Nadu government in 2013.[2][3]

The university also provides more than 500 courses through distance education.[4] The Directorate of Distance Education (DDE) of Annamalai University offers education to those people who are unable to attend the campus but who desire to study. It is credited with the largest enrollment in India and is well equipped with computers and other infrastructure, separate teaching faculty and administration, study centers, and computer training centers to serve its students. It was the first institution in India to offer postgraduate degree programmes in Applied Psychology, Physics, Chemistry, Zoology, Botany, Bioinformatics and Law through distance education. The Directorate of Distance Education also offers programmes in Fashion Design, Textile Design, Interior Design, Hotel Management and Catering Technology, Retail Management, Twinning, Health Science, a Commonwealth Youth Programme, Yoga, Music, Fire and Safety, Pharmaceutical and Taxation.

The University Grants Commission (India) (UGC) cancelled the recognition of the DDE courses in 2015. Annamalai authorities approached the Madras high court which has as of now stayed the UGC's cancellation order. As of Dec 2015 the matter is still pending in Madras High Court. The Directorate introduced a B.Ed. Programme through distance education in 2008-09 with the approval of National Council for Teacher Education, New Delhi.

The National Assessment and Accreditation Council has accredited Annamalai University with a grade of A' in 2014.[5] 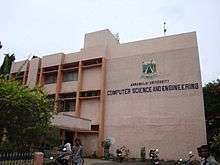 A total of 356 scholarships and awards[16] are given to eligible candidates every year.

In 2006, Annamalai University opened its first Study Center in Toronto, Canada, offering programs in Music, Dance, Tamil and Yoga. Other overseas centres include the Al Mihad Institute, Dubai and the Al Hilal Education Centre, Sharjah in the United Arab Emirates as well as the Al Noor Education Centre in Muscat, Oman.