The chancellor of the university is Mata Amritanandamayi, also known as Amma or, simply, "Mother".

The vice-chancellor is P. Venkat Rangan, a notable Indian computer scientist, who founded the Multimedia Labs at the University of California, San Diego. The Amrita Alumni Association, or "A3", is an umbrella association for alumni of Amrita University.

The two campuses, Amritapuri and Ettimadai, started as computer training centres and evolved into colleges, inaugurated as the Amrita Institute of Technology (AITEC). AITEC, Amritapuri was affiliated to the University of Kerala and AITEC, Ettimadai was affiliated to Bharathiar University. In 2002, the colleges were inaugurated again as Amrita School of Engineering when the Amrita Vishwa Vidyapeetham was born.

Amrita Vishwa Vidyapeetham has five campuses, with headquarters in Ettimadai, Coimbatore, Tamil Nadu. It has four other campuses: the Amritapuri and Kochi campuses in Kerala and the Bengaluru and Mysore campuses in Karnataka.

Amrita University was recently ranked 181 in the Times Higher Education World University Rankings. Among Indian institutes, this ranking makes it as No. 1 private university and overall 15th among Indian universities.

The Amrita School of Engineering at Ettimadai, Coimbatore predates Amrita University. In 1994, when it was established, it became the first Amrita institution for higher education. In 2008, the school celebrated its thirteenth "Institution Day".[3] 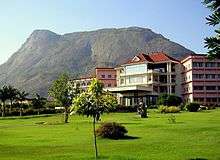 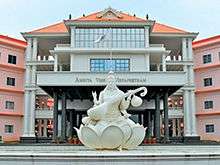 The other two Engineering Schools are at Amrita School of Engineering, Bengaluru, Karnataka and Kollam (Amritapuri), Kerala.

The three Schools of Engineering have the following departments:

The school offers a residential two-year MBA degree program. In addition, it offers a dual degree program leading to an MS in information technology and MBA in collaboration with State University of New York at Buffalo, for working professionals at the Bangalore campus.[4] Faculty members have B.A.s and B.B.A.s from reputed foreign universities such as University of California, Berkeley, Cornell University, NYU Stern School of Business, University of Texas at Austin, and Kellogg School of Management.[1]

Amrita Schools of Arts and Sciences

Attached to the Amrita Institute of Medical Sciences and Research Centre, a 1300-bed super-speciality hospital in Kochi aims to provide the "best medical care regardless of the patient's ability to pay. "[5] It is the university's healthcare initial campus. Foundation stone for a second medical school and 2,000 bed hospital campus in Delhi is laid on of May 9, 2016. This will be the second healthcare campus and medical school."[6]"The Amrita Schools of Medicine, Dept of Hospital Administration provide MHA (Masters in Hospital Administration), Nursing, Pharmacy, and Dentistry are on this campus. They respectively offer MBBS, Bachelor of Science (Nursing), undergraduate/graduate Pharmacy programs, and Bachelor of Dental Surgery degree programs.

The School of Medicine offers graduate programs including MSc in disciplines, Diplomate of National Board (DNB), and PhD. In 2008, the first batch of MBBS students graduated with A. P. J. Abdul Kalam presiding over the graduation ceremony.[7]

The Amrita School of Pharmacy was established in 1997 and is on the Health Sciences Campus of at Kochi, Kerala. The school is recognized by the Pharmacy Council of India (PCI) as well as the All India Council for Technical Education (AICTE). The school runs programs at undergraduate, postgraduate, and doctoral levels including:

Candidates pursuing M.Pharm. at this school after qualifying for the Graduate Pharmacy Aptitude Test (GPAT) receive monthly stipends from AICTE.

The School of Ayurveda on the beautiful rural campus of Amritapuri on the bank of the backwaters of Kerala offers the Bachelor of Ayurveda, Medicine and Surgery (BAMS) degree program.

The Amrita School of Biotechnology is approved as a Center of Relevance and Excellence (CORE) in Biomedical Technology under the Department of Science and Technology, Government of India, TIFAC Mission REACH programme. The School of Biotechnology was selected by the DBT-BIRAC (Government of India) and the Bill & Melinda Gates Foundation as one of the top six innovators in India to develop next generation sanitation solutions using bacteriophages and other biocontrol agents.[10][11]

The school offers (BA and MA) degree programs in Communication. The course helps prepare students for careers in journalism, new media/animation, and short film making and advertising. It is modeled on UNESCO guidelines. Amrita University was one among the first Indian universities to adopt the UNESCO model curriculum.[12]

Degree programs in social work (MSW) are offered by the university.

Other program include short- and long-term certificate programs, one-year programs in 3D Animation and 3D Modeling using MAYA and 3DS Max as well as two certificate programs in Interior Design and Web Development along with four short-term classes that are two-month intensives focusing in Photoshop & Illustrator, AutoCAD, Web Development, and Video Editing provided by Amrita Multimedia Academy based on the Amritapuri Campus held by university research center named 'AmritaCREATE'. Short launched few new programs like Motion graphics and Gaming which is 12-month and Mobile UI Design which is graphic based purely aimed for professional and graphic aspirants.

FOSS at Amrita
FOSS@Amrita is one of the most active student communities at Amrita University, dedicated to improving technical and social skills through contributing to open source.
ACM-ICPC
ACM-ICPC is held annually in the month of December at Amritapuri and Ettimadai campuses under ACM's Amritapuri Chapter. It is the only university in India to host this event other than IIT-Kanpur and IIT Kharagpur.
SAE India
Amrita has an SAE chapter and is very active member of SAE in South India.
Infosys Campus Connect
Amrita is a part of Infosys Campus Connect Program undertaken by Infosys.
IEEE
The IEEE has a chapter in Amrita for enhancing the skills of students in the areas of Electrical, Electronics and Computer Science Engineering.
Techfests
Amrita Vishwa Vidyapeetham plays hosts to two national tech-fests, Anokha and Pragati in Ettimadai Campus, Vidyut in Amritapuri Campus and Aarohan and Ekatva at Bengaluru Campus in addition to inter-department tech-fests across its five campuses.

In February 2007, the Amrita Center for Nano-sciences became the nation's first center to be set up for tissue engineering and stem cell research.[13]

The Centers for Digital Health and Digital Earth participate in telemedicine projects to bring healthcare to rural India.[14][15] The Centre for E-learning develops the software and infrastructure needed, eventually aimed at helping bring distance learning to village clusters.[16][17]

Products developed include Amrita MiTrans made at the Amrita Research Labs (ARL) to facilitate delivery of high bandwidth information to moving vehicles to help with flight scheduling, location tracking, and other content delivery.[19] ARL has filed for a patent for this product.[20]