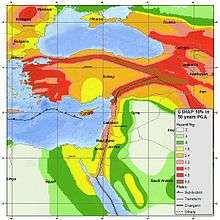 This is a list of earthquakes in the Levant, including earthquakes that either had their epicenter in the Levant or caused significant damage in the region. As it is now, the list is focused on events which affected the territories of modern-day Israel and Palestine, with additional mention on some major events in Syria and Lebanon.

The Jordan Rift Valley is the result of tectonic movements within the Dead Sea Transform (DSF) fault system. The DSF forms the transform boundary between the African Plate to the west and the Arabian Plate to the east. The Golan Heights and all of Jordan are part of the Arabian Plate, while the Galilee, West Bank, Coastal Plain, and Negev along with the Sinai Peninsula are on the African Plate. This tectonic disposition leads to a relatively high seismic activity in the region.

The region has experienced many earthquakes, the most destructive ones being those of 31 BCE, 363, 749, and 1033. Major earthquakes have included: