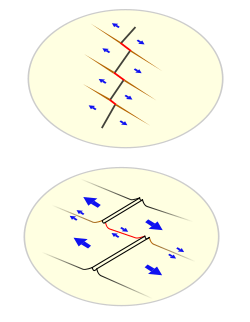 A transform fault or transform boundary (also known as a conservative plate boundary, since these faults neither create nor destroy lithosphere), is a type of fault whose relative motion is predominantly horizontal, in either a sinistral (left lateral) or dextral (right lateral) direction. Furthermore, transform faults end abruptly and are connected on both ends to other faults, ridges, or subduction zones.[1] While most transform faults are hidden in the deep oceans where they offset divergent boundaries as series of short zigzags accommodating seafloor spreading, the best-known (and most destructive) are those on land at the margins of tectonic plates. Transform faults are the only type of strike-slip fault that can be classified as a plate boundary.

John Tuzo Wilson recognized that the offsets of oceanic ridges by faults do not follow the classical pattern of an offset fence or geological marker in Reid’s rebound theory of faulting,[2] from which the sense of slip is derived. The new class of faults,[3] called transform faults, produce slip in the opposite direction from what one would surmise from the standard interpretation of an offset geological feature. Slip along transform faults does not increase the distance between the ridges it separates; the distance remains constant in earthquakes because the ridges are spreading centers. This hypothesis was confirmed in a study of the fault plane solutions that showed the slip on transform faults points in the opposite direction than classical interpretation would suggest.[4]

Difference between transform and transcurrent faults

The effect of a fault is to relieve strain, which can be caused by compression, extension, or lateral stress in the rock layers at the surface or deep in the Earth’s subsurface. Transform faults specifically relieve strain by transporting the strain between ridges or subduction zones. Transform faults also act as the plane of weakness allowing for the splitting in rift zones.

Transform faults are commonly found linking segments of mid-oceanic ridges or spreading centres. These mid-oceanic ridges are where new seafloor is constantly created through the upwelling of new basaltic magma. With new seafloor being pushed and pulled out, the older seafloor slowly slides away from the mid-oceanic ridges toward the continents. Although separated only by tens of kilometers, this separation between segments of the ridges causes portions of the seafloor to push past each other in opposing directions. This lateral movement of seafloors past each other is where transform faults are currently active.

Transform faults move differently than a strike-slip fault at the mid-oceanic ridge. Instead of the ridges moving away from each other, like other strike-slip faults, transform fault ridges will stay in the same fixed location, and the new ocean seafloor being created at the ridges is pushed away from the ridge. Evidence of this can be found in paleomagnetic striping on the seafloor.

A paper written by Gerya theorizes that the creation of the transform faults between the ridges of the mid-oceanic ridge is attributed to rotated and stretched sections of the mid-oceanic ridge.[5] This occurs over a long period of time with the spreading center or ridge slowly deforming from a straight line to a curved line. Finally, fracturing along these planes forms transform faults. As this takes place, the fault changes from a normal fault with extensional stress to a strike slip fault with lateral stress.[6] In the study done by Bonatti & Crane, peridotite and gabbro rocks were discovered in the edges of the transform ridges. These rocks are created deep inside the Earth’s mantle and then rapidly exhumed to the surface.[6] This evidence helps to prove that new seafloor is being created at the mid-oceanic ridges and further supports the theory of plate tectonics.

The most prominent examples of the mid-oceanic ridge transform zones are located in Atlantic Ocean between South America and Africa. Known as the St. Paul, Romanche, Chain, and Ascension fracture zones, these areas have with deep, easily identifiable transform faults and ridges. Other locations include: the East Pacific Ridge located in the South Eastern Pacific Ocean, which meets up with San Andreas Fault to the North.

Transform faults are not limited to oceanic crust and spreading centers; many transform faults are located on continental margins. The best example is the San Andreas Fault on the Pacific coast of the United States. The San Andreas Fault links the East Pacific Rise off of the West coast of Mexico (Gulf of California) to the Mendocino Triple Junction (Part of the Juan de Fuca plate) located off the coast of the North Western United States making it a ridge-to-transform style transform fault.[3] The formation of the San Andreas Fault system occurred fairly recently during the Oligocene Period between 34 million and 24 million years ago.[7] During this period, the Farallon plate, followed by the Pacific plate, collided into the North American plate.[7] The collision led to the subduction of the Farallon plate underneath the North American plate. Once the spreading center separating the Pacific and Farallon plate was subducted underneath the North American plate, the San Andreas Continental Transform Fault system was created.[7] 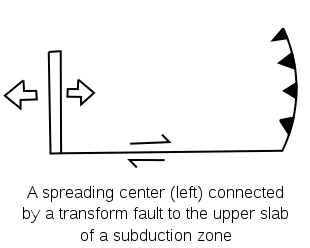 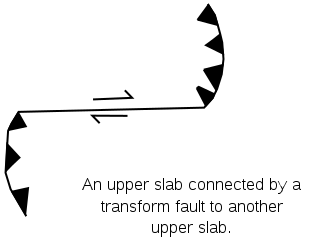 Constant length faults: In other cases, transform faults will remain at a constant length. This consistency can be attributed to many different reasons. In the case of a ridge-to-ridge transforms, it is caused by the continuous growth by both ridges outward, canceling any change in length. The opposite occurs when a ridge linked to a subducting plate, where all the lithosphere (new sea floor) being created by the ridge is being subducted, or swallowed up, by the subduction zone.[3] Finally, when two upper subduction plates are linked there is no change in length. This is due to the plates moving parallel with each other and no new lithosphere is being created to change that length. 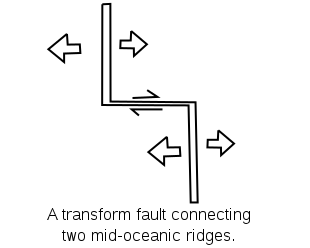 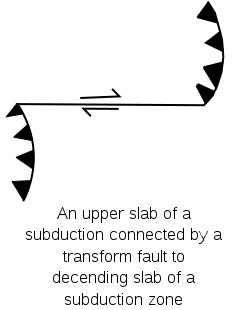 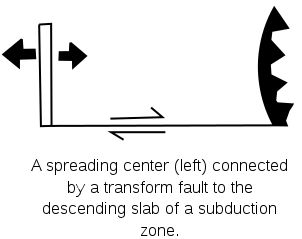 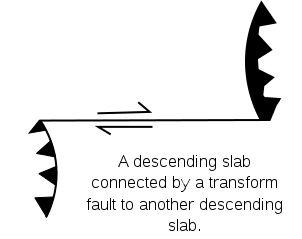