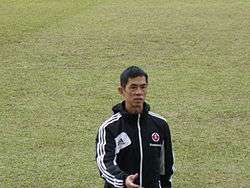 Liu Chun Fai (Chinese: 廖俊輝) is a former Hong Kong professional footballer and the head coach of South China. He is regarded as one of the best Hong Kong goalkeepers in the 1980s. He holds an AFC Grade B Coach license and the goalkeeper coach qualification.

He retired in the early 1990s and became a coach. He was the coach of Hong Kong 09, Yau Tsim Mong and Citizen. He started in Citizen as a goalkeeper coach, and in 2006 he became the head coach of the team.[2] In 2007-08 season, he led the team to finish second in Hong Kong First Division League and captured the champion of Hong Kong FA Cup, the first major trophy won by the team ever.[3] With this outstanding result, he was awarded the Best Coach Award of the season.[4]