This is a Chinese name; the family name is Ku. 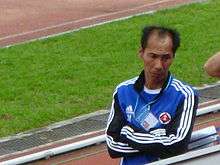 Ku Kam Fai (Chinese: 顧錦輝; Jyutping: gu3 gam2 fai1) is a former Hong Kong professional footballer and he is now one of the assistant coaches of South China. His nickname is Muk Tsui Fai (木嘴輝).

He is widely regarded as one of the best defenders and sweepers in Hong Kong football history. He served for 15 years in South China Athletic Association, which lasted for most of his career.

Ku Kam Fai is one of the members in the famous "519" match, when Hong Kong historically beat China by 2:1 in the 1986 FIFA World Cup Qualifying Round on 19 May 1985. Moreover, he is the one who scored the winning goal of the match.[1]

On 23 February 2007, he was invited to represent SCAA 92/93 Invitation Team to play against SCAA Elite Youth in the pre-match of the exhibition competition BMA Cup organised by South China.[2]