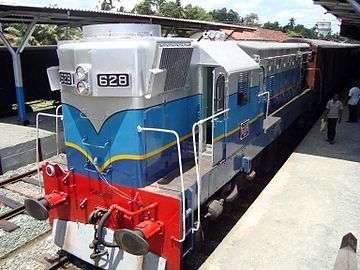 The first locomotives pulled trains on the original segment of the Main Line, on 54 kilometres (34 miles) connecting Colombo and Ambepussa.[1] In 1953, Sri Lanka Railways enhanced its service to more power with diesel locomotives.[2] Since then, various types of diesel locomotives were added to the service. 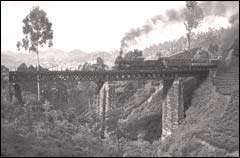 Sri Lanka's first railway locomotive was Leopold, in 1864. It was one of seven 4-4-0 locomotives built that year for the Ceylon Government Railway by Robert Stephenson and Company (nos. 1–5) and Beyer, Peacock and Company (nos. 6 and 7).[3] Many more steam locomotives were added to the system, through to the 1950s. All the steam locomotives bar three were manufactured in the United Kingdom; the exceptions were three 4-4-0s built at the railway's Maradana Works near Colombo in 1900 and 1905. In 1938, locomotives were reclassified, based on wheel arrangement and gauge. Sub-classification was based on weight, modifications, heating type, boiler capacity, or other features.[4]

Throughout its history, Ceylon Government Railway had 410 steam locomotives.[5]

The Railways upgraded its service to diesel locomotives, under the leadership of B. D. Rampala in the mid 1950s.[2] In 1953, the first locomotives from British builder Brush Bagnall were imported. Since then, the Railways have imported locomotives from Canada, Japan, West Germany, India, France, and China[6][7][8]

As of August 2011, Sri Lanka does not have commercially operational electric locomotives or train sets. Electrification has been proposed, to improve energy efficiency and sustainability.[9]

Sri Lanka's locomotives have appeared in several different liveries over the years.

The steam locomotives were mainly black.

The DMUs are painted in various liveries, unique to their classes. Typically they feature horizontal bands of colour running their entire length and a solid colour on the front and back ends. 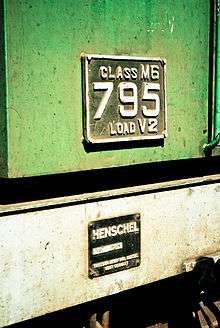 Narrow gauge locomotives were numbered in the same list as broad gauge locomotives. Diesel locomotives and multiple unit numbering started from 500 – an Armstrong Whitworth 122 hp 0-4-0 diesel-electric shunter delivered in 1934[12] – and reached 840 in 1991.[13] and included one locomotive experimentally converted to electric traction.[4][14]

Steam locomotives were used on regular services until the 1970s.[2][4]

Diesel locomotives of Sri Lanka Railway are categorized into several classes and their sub classes.

Note: One class N2 locomotive was re-classified as Class E1 after fitting with Alstom pantographs, to be run under electric power. Not to be confused with the steam locomotive E1, this electric locomotive is not in commercial use. One class P1 locomotive was at Viharamahadevi (Victoria) Amusement Park[14]

The various Railbus units that are currently operated are not listed below.

Locomotives and trainsets on order

In 2013, the railways ordered new trainsets from CSR to replace locomotive-hauled trains.[20] They would replace an aging fleet of locomotives.