The Kelani Valley Railway Line, in Sri Lanka, covering the breadth of Colombo District and some parts of Kegalla and Ratnapura Districts. The line is owned, maintained, and operated by Sri Lanka Railways. 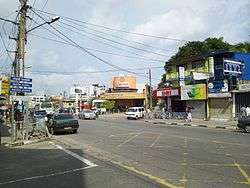 The Kelani Valley Line runs southeast from Colombo Maradana Station, through much of the city of Colombo. It runs through major business centres, like Nugegoda and Maharagama, before turning eastwards. It crosses the Southern Expressway near Homagama and continues east towards Avissawella, the current terminus of the line. The line serves an increasingly urbanising community. 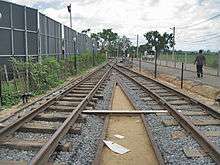 An exhibit of narrow gauge line.

The services were restarted up to Avissawella in 1978.

In 1992, a project was started to convert the line to 1,676 mm (5 ft 6 in). The project was finally completed up to Avissawella (58 km or 36 mi) in 1996. The tracks beyond were completely abandoned and currently the tracks from Avissawella to Yatiyanthota and Opanayaka can only be traced by the remaining and ruined stations, bridges and bunds.

The Kelani Valley Line is entirely single track, at 1,676 mm (5 ft 6 in).[2] As train frequency increases, it is becoming increasingly challenging to operate trains running both direction on the single-line track.

Currently the line serves an increasingly urbanizing population leading up to Avissawella. Even though the line was broad-gauged to improve the services in capacity and speed, the objectives have not been achieved due to sharp curves (a leftover of the narrow gauge system) and the illegal constructions on either sides of the track from Colombo up to Maharagama.

The Kelani Valley Line is not electrified. All services run on diesel power. Current operating speeds are limited due to the sharp curves on the line. 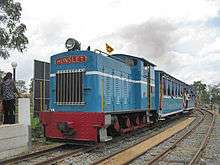 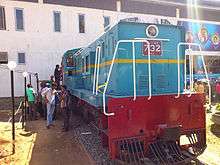 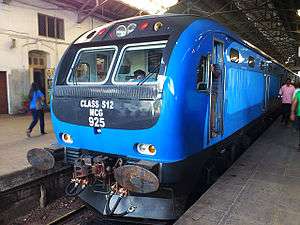 Currently, the line is operated with broad-gauged S8 and S12 diesel multiple units.

Sri Lanka Railways has a monopoly on the operation of Kelani Valley Line.

As of January, 2016, there were 20 trains operating on the line daily, mainly catering to rush hour commuters traveling to and from Colombo. In Addition to this Sri Lanka Railways introduced a Rail bus service to cater commuters traveling between Kosgama & Maharagama during day time.