The Main Line is a major railway line in the rail network of Sri Lanka. The line begins at Colombo Fort and winds through the Sri Lankan hill country to reach Badulla.

The Main Line starts from Colombo and runs east and north past the rapidly developing centers of Ragama, Gampaha, Veyangoda, and Polgahawela.

At Rambukkana, the Main Line begins its steep climb into the hills of the upcountry. Between Balana and Kadugannawa, the track clings to the side of sheer cliffs, offering passengers spectacular views of Batalegala ('Bible' Rock).

From Peradeniya Junction, a branch line reaches Kandy and Matale.

The Main Line then continues its climb through the scenic tea country, connecting busy local market centers at Gampola, Nawalapitiya, and Hatton before reaching Nanu Oya. This is the connection to the former colonial resort of Nuwara Eliya, still popular for its temperate climate, classic hotels, and British-style gardens. The Main Line continues its ascent to the summit at Pattipola, 6,226 feet above sea level, before descending past Bandarawela to Badulla. In the upcountry, passengers are rewarded with views of tea gardens, mountains and valleys, cascading torrents and waterfalls.[1]

The first segment of the Main line was opened in 1864, with the construction of the line from Colombo to Ambepussa, 54 kilometers to the east. This was the first rail line in the country. The first train ran on 27 December 1864. The line was officially opened for traffic on 2 October 1865. The main reason for building a railway system in Sri Lanka (Ceylon) was to transport tea and coffee from the hill country to Colombo.

In 2011, ExpoRail and Rajadhani Express began operating a premium section on trains on the Main Line. These services were launched to improve rail transport's appeal to the public.[3][4] Sri Lanka Railways also began importing new diesel-multiple units to replace the aging rolling stock previously used on the line. Built by China's CSR Corporation Limited, the new S12 trainsets are designed to work on the steep gradients of the hill country.[5] The commuter rail portion of the line, within the Colombo metropolitan area, is planned to be electrified, though no ground work has started.[6] 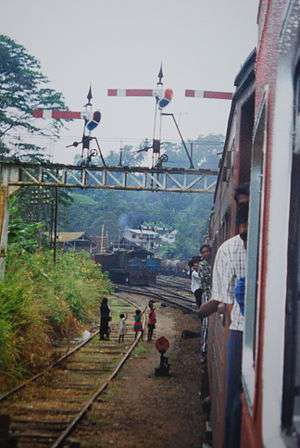 Older railway infrastructure on the Main line, including a gantry of semaphore signals

The Main Line is not electrified. Regular services run on diesel power. However, there are plans to electrify the commuter rail network, within Colombo. This includes the Main-line segment between Colombo Fort and Veyangoda.[6]

Most of the line currently operates on a lock-and-block signaling system. The commuter rail section was upgraded to electric signalling in the mid-twentieth century. The system is connected to a centralised traffic control panel at Maradana Railway Station.[2]