The Coastal Line (sometimes referred to as the Coast Line or the Southern Line) is a major railway line in Sri Lanka, running between Colombo Fort and Matara, via Galle. Operated by Sri Lanka Railways, the line includes some of the busiest rail services in the country. The line is currently being extended to Beliatta and is proposed to be extended to Kataragama, via Hambantota. With a designed maximum speed of 100 km/h between Kalutara and Matara, and a proposed maximum speed of 120 km/h between Matara and Beliatta,[1] the line is one of the fastest in Sri Lanka.[2]

The Coastal line begins at Maradana Station and runs west towards Colombo Fort. It then turns south and runs through much of Colombo parallel to the beaches on the city's west coast, passing many commuter rail stations, such as Slave Island. It passes Panadura before reaching Kalutara. The commuter rail services end as the line continues south along the coast towards Galle.

Galle station is designed as a terminus station. Thus trains have to back out of the station to continue towards Matara. Matara is the current terminus of the Coast Line, though extension is under construction to Hambantota and Kataragama. 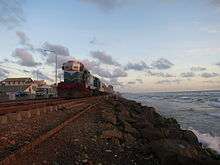 A train running on the coastal line

This line was the second railway line in Sri Lanka. Construction works started after Colombo-Kandy-Badulla Main Line. On 1st of March 1877 first train up to Panadura was commenced. On 1st of February 1878, trains ran up to Kalutara and one year after that on 1st of February 1879 Wadduwa Station was declared open. On 22 September 1879 inaugural opening of Kalutara North and Kalutara South Stations and ran first train to Kalutara South. On 31 March 1890 line extended to Kalutara South to Aluthgama. Then up to Kosgoda on 8 September 1892 and Kosgoda to Ambalangoda on 15 November 1893. On 7 May 1894 British government completed the construction works to Galle . After nearly a year and half later on 17 December 1895 train services to Matara commenced.

In the mid-twentieth century, the coastal line experienced many changes to accommodate growing traffic. Galle Station was upgraded with better facilities and modern architecture. Express trains began serving the line, including the now celebrated Ruhunu Kumari. Along with the rest of the railway network, diesel traction replaced steam locomotives on all services.[3]

The railway line was severely affected by the 2004 Indian-Ocean Tsunami. A train was swept off the track, killing more than 1500, in the worst rail disaster in history.[4] 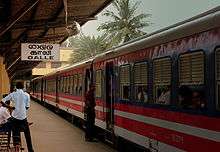 A train at Galle station

In 2011-2012, the Coastal Line underwent complete reconstruction between Kalutara and Matara, to upgrade the track. The line was upgraded to be able to handle trains at 100 km/h, allowing for shorter journey times and smoother service. The upgrade included replacing the rails and sleepers to ensure smoother and safer operation. The previously 3-hours-and-forty-minute travel time between Colombo and Matara has been reduced to just two hours.[2]

The line is currently being extended to reach Hambantota and Kataragama.[5] The first phase is an extension of the line to Beliatta. Stations will be built along the phase-1 extension at Kekanadura, Babarenda, Wavurukannala and Beliatta.[6] Trains are planned to travel at 120 km/h on the new track.[1]

For the second phase extension between Beliatta and Hambantota, the new railway line is proposed to shift inland, compared to the coastal alignment west of Beliatta. This would protect natural habitat on the coastal belt and minimise damage to property. A feasibility study and an environment impact assessment for the Beliatta to Hambantota and Kataragama phases of construction, connecting Hambantota, Angunakolapelassa, Wetiya Junction; Andarawewa, Mattala and Lunugamvehera, was approved by the Cabinet.[1]

The Coastal Line is not electrified. Regular services run on diesel power. However, there are plans to electrify the commuter-rail network, within the Colombo metropolitan area. This includes the Coastal-line segment between Colombo Fort and Panadura.[8]