The museum was opened on 27 December 2014 in order to commemorate the 150th anniversary of railway service in Sri Lanka. Previously, the museum was located in Colombo.[2] The old museum has been opened in May 2009.[3]

The museum has old engines, locomotives, rail cars, trolleys, carriages, machineries, and equipments that used since the beginning of Sri Lanka Railway.[4] 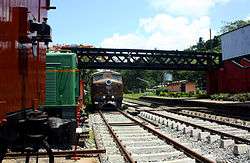