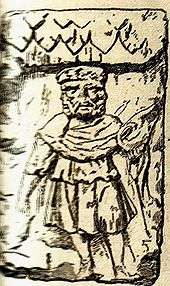 A three-headed image of a Celtic deity found in Paris; interpreted as Mercury and now believed to represent Lugus[1]

Lugus was a deity of the Celtic pantheon. His name is rarely directly attested in inscriptions, but his importance can be inferred from place names and ethnonyms, and his nature and attributes are deduced from the distinctive iconography of Gallo-Roman inscriptions to Mercury, who is widely believed to have been identified with Lugus, and from the quasi-mythological narratives involving his later cognates, Welsh Lleu Llaw Gyffes (Lleu of the Skillful Hand) and Irish Lugh Lámhfhada (Lugh of the Long Arm). 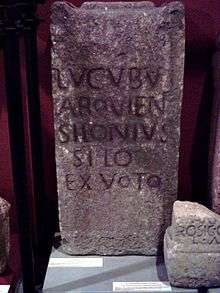 The god Lugus is mentioned in a Celtiberian inscription from Peñalba de Villastar in Spain, which reads:

The exact interpretation of the inscription is debated, but the phrase "to Luguei" (where the theonym appears in the dative singular following the preposition to "to, for", thus "to/for Lugus") clearly indicates a dedication to the god Lugus.[7][8]

"L. L. Urcico dedicated this, sacred to the Lugoves, to the guild of shoemakers"[10]

The plural form of the theonym is also found in the following Latin inscriptions:

The majority of the known inscriptions dedicated to Lugus come from the Iberian Peninsula, perhaps indicating this deity's particular importance and popularity among the Iberian Celts.[19]

An inscribed lead plate found in Chamalières in France includes the phrase luge dessummiíis, which has been tentatively interpreted by some scholars as "I prepare them for Lugus", though it may also mean "I swear (luge) with/by my right (hand)".[20]

His name was commemorated in numerous place-names, such as Lugdunum (Celtic *Lug[u]dūnon, "fort of Lugus"; modern Lyon, France), capital of the Roman province of Gallia Lugdunensis. Other such place-names include Lugdunum Clavatum (modern Laon, France) and Luguvalium[21] (modern Carlisle, England). It is also possible that Lucus Augusti (modern Lugo in Galicia, Spain) is derived from the theonym Lugus,[22] but Lucus in that place may in fact be purely Latin (lucus = 'sacred grove/forest').

Other places which are likely named after him include:

Ethnonyms which may derive from Lugus include the Luggones of Asturias,[23] and the Lougei, known from inscriptions in Lugo and El Bierzo.[19]

Julius Caesar in his De Bello Gallico identified six gods worshipped in Gaul, by the usual conventions of interpretatio romana giving the names of their nearest Roman equivalents rather than their Gaulish names. He said that "Mercury" was the god most revered in Gaul, describing him as patron of trade and commerce, protector of travellers, and the inventor of all the arts.[24] The Irish god Lug bore the epithet samildánach ("skilled in all arts"), which has led to the widespread identification of Caesar's Mercury as Lugus. Mercury's importance is supported by the more than 400 inscriptions referencing him in Roman Gaul and Britain.[12] Such a blanket identification is optimistic – Jan de Vries[25] demonstrates the unreliability of any one-to-one concordance in the interpretatio romana[26] – but the available parallels are worth considering.

The iconography of Gaulish Mercury includes birds, particularly ravens and the cock, now the emblem of France; horses; the tree of life; dogs or wolves; a pair of snakes (c.f. Hermes's Caduceus and Abraxas); mistletoe; shoes (one of the dedications to the Lugoves was made by a shoemakers' guild; Lugus's Welsh counterpart Lleu (or Llew) Llaw Gyffes is described in the Welsh Triads as one of the "three golden shoemakers of the island of Britain"); and bags of money. He is often armed with a spear. He is frequently accompanied by his consort Rosmerta ("great provider"), who bears the ritual drink with which kingship was conferred (in Roman mythology). Unlike the Roman Mercury, who is always a youth, Gaulish Mercury is occasionally also represented as an old man.

Gaulish Mercury is associated with triplism: sometimes he has three faces, sometimes three phalluses, which may explain the plural dedications. This also compares with Irish myth. In some versions of the story Lug was born as one of triplets, and his father, Cian ("Distance"), is often mentioned in the same breath as his brothers Cú ("Hound") and Cethen (meaning unknown), who nonetheless have no stories of their own. Several characters called Lugaid, a popular medieval Irish name thought to derive from Lug, also exhibit triplism: for example, Lugaid Riab nDerg ("of the Red Stripes") and Lugaid mac Trí Con ("Son of Three Hounds") both have three fathers.

Rübekeil[27] suggests that Lugus was a triune god, comprising Esus, Toutatis and Taranis, the three chief deities mentioned by Lucan (who, at the same time, makes no mention of Lugus), and that pre-Proto-Germanic tribes in contact with the Celts (possibly the Chatti) moulded aspects of Lugus into the Germanic god Wōdanaz i.e. that Gaulish Mercury gave rise to Germanic Mercury.

High places (Mercurii Montes), including Montmartre, the Puy-de-Dôme and the Mont de Sène, were dedicated to him.

In Ireland, Lugh was the victorious youth who defeats the monstrous Balor "of the venomous eye". He was the godly paradigm of priestly kingship, and another of his appellations, lámhfhada “of the long arm”, carries on an ancient Proto-Indo-European image of a noble sovereign expanding his power far and wide. His festival, called Lughnasadh ("Festival of Lugh") in Ireland, was commemorated on 1 August. When the Emperor Augustus inaugurated Lugdunum ("fort of Lugus", now Lyon) as the capital of Roman Gaul in 18 BC, he did so with a ceremony on 1 August (this may be purely coincidental, however). At least two of the ancient Lughnasadh locations, Carmun and Tailtiu, were supposed to enclose the graves of goddesses linked with terrestrial fertility.

Lugus has also been suggested as the origin not only of Lugh and Lleu Llaw Gyffes, but also the Arthurian characters Lancelot and Lot (most famously championed by the Arthurian scholar Roger Sherman Loomis), though more recent Arthurian scholarship has downplayed any such link between Lugus and Lancelot.