Nesset is a municipality in Møre og Romsdal county, Norway on the Romsdal Peninsula. The administrative centre is the village of Eidsvåg. Other population centers include Rausand, Boggestranda, Myklebostad, Eresfjord, and Eikesdalen.

Mardalsfossen, one of Norway's tallest waterfalls, a popular tourist attraction during the tourist season, is located in Nesset, along the shores of the lake Eikesdalsvatnet. 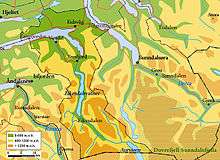 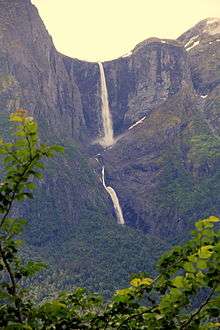 View of the famous Mardalsfossen waterfall

The municipality (originally the parish) is named after the old Nesset farm and vicarage (Old Norse: Nøytisætr, spelled "Nødesetter" in 1520) since this is where the old Nesset Church was located. The first element is probably nes which means "headlands" (since the farm is lying on a prominent headland between the Langfjorden and the Tingvollfjorden) and the last element is setr or sætr which means "farm". Before 1889, the name was written Næsset.[3]

The coat-of-arms is from modern times. They were granted on 10 March 1986. The broken gray line symbolizes the two stage drop on one of Europe's highest waterfalls, the Mardalsfossen, which is located in the municipality. The designer was Olav Sandø, from Eidsvåg.[4]

The Church of Norway has four parishes (sokn) within the municipality of Nesset. It is part of the Indre Romsdal deanery in the Diocese of Møre. 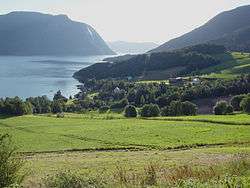 The municipality is made up mostly of the Eikesdalen valley which surrounds the lake Eikesdalsvatnet. The lake is fed from the lake Aursjøen on the border of Oppland county. The water then flows through the Aura River into the lake Eikesdalsvatnet. That water then flows into the Eira River and then on to the Eresfjorden, a branch of the Langfjorden which itself is a branch off the great Romsdalsfjorden. The mountains Skjorta, Fløtatinden, and Gjuratinden surround the main valley.

From the shores of the fjord, to the towering mountains at 1,800 metres (5,900 ft) above sea level, the rural community of Nesset offers the visiting birder a range of habitats, and several interesting areas. One area worth checking is Eidsvågleirene. Though the selection of species will not be high, several of the commoner species can be found. The grey heron and mallard are characteristic species in the area.