listen) is a county in Norway, bordering Sør-Trøndelag, Møre og Romsdal, Sogn og Fjordane, Buskerud, Akershus, Oslo and Hedmark. The county administration is in Lillehammer. Oppland is, together with Hedmark, one of the only two landlocked counties of Norway.

Oppland extends from the lakes Mjøsa and Randsfjorden to the mountains Dovrefjell, Jotunheimen and Rondane. The county is conventionally divided into traditional districts. These are Gudbrandsdalen, Valdres, Toten, Hadeland and Land.

Oppland includes the towns Lillehammer, Gjøvik, Otta, and Fagernes, and Norway's two highest mountains, Glittertind and Galdhøpiggen, Valdres and Gudbrandsdal being popular attractions. The Gudbrandsdal surrounds the river Gudbrandsdalslågen, and includes the udes the area extending from Jotunheimen down to Bagn at Begna River. It is a well known place for skiing and winter sports. The main population centres in this area are Beitostølen and Fagernes. Eight of the ten highest mountains in Norway are located in the western part of Oppland.

In Norse times the inner parts of Norway were called Upplǫnd 'the upper countries'. The first element is upp 'upper'. The last element is lǫnd, the plural form of 'land'.

In 1757 the inner parts of the great Akershus amt were separated, and given the name Oplandenes Amt. This was divided in 1781 into Christians Amt (named after the king Christian VII) and Hedemarkens Amt. The name/form was changed to Kristians Amt in 1877 (after an official spelling reform that changed ch to k - see also Kristiania, Kristiansand and Kristiansund). In 1919 the name Kristians Amt was changed (back) to Opland fylke, and the form Oppland was settled in 1950.

The coat of arms were granted in 1989, and it shows two Pulsatilla vernalis. 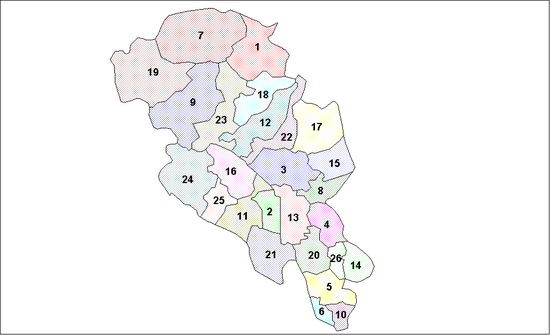 Oppland County has a total of 26 municipalities: