The M53 is an 18.9-mile (30.4 km) motorway in the Metropolitan Borough of Wirral and Cheshire on the Wirral Peninsula in England.[1] It can also be referred to as the Mid Wirral Motorway.[2] It runs between the Kingsway Tunnel, at Wallasey in the north, and the A55 at Chester.[1]

The main reason for the motorway was to provide a through route to the new Mersey Road Tunnel, Kingsway, which was built at the same time. Part of this motorway was originally the M531. 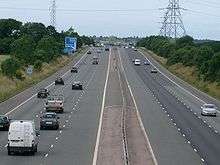 Looking northwards, midway between junctions 3 and 4 at Storeton

Starting at the northern end, the motorway starts in Wallasey at the exit slip roads from the Kingsway Tunnel from Liverpool. It loops round the north west of Birkenhead and then runs south as a dual 3-lane route between Upton, Woodchurch in the west and Prenton. From junctions 1 to 3 it runs parallel to the Borderlands railway line. It crosses this line south of junction 3. From this junction it proceeds south to the west of Bebington through junction 4 and then further south for 4 miles (6.4 km) (where it crosses the Wirral railway line), before narrowing to dual 2 lanes[3] and turning sharply to the east. At junction 5, traffic for Wales can take the A41, A550 & A494 to join the A55 near Ewloe. The road passes north and then east of Hooton, then to the east of Overpool and Wolverham and with Ellesmere Port to the west.

This motorway was originally two separate projects, the M53 and M531. The M53 was originally proposed to run from the Kingsway Tunnel to Backford.[4] The M531 would have run from between the current junctions 4 & 5 and provided a connection with the M56 for eastbound travel.

When the M53 was first planned in the early 1960s, it was designed as a route to connect the two Mersey road tunnels with the A55 trunk road on the Welsh border, giving Liverpool and the rest of Merseyside a direct link with Chester and the towns on the North Wales coast.

In the event, the A55 link was never built and instead the M531 (by-passing the eastern side of Chester) was incorporated into the M53.[5]

Construction on the M53 started in 1969. It was to be built in stages as part of a strategic route to North Wales for traffic from Merseyside. The route to North Wales was unresolved as there was even an option to run due west from south of junction 4 and cross the River Dee on a barrage. In 1972 this first section from the tunnel to junction 5 where it connected straight into the Vauxhall Motors road was opened. A junction was partially built to allow extension of the motorway further south west, around 1 mile (1.6 km) west of junction 5. The unbuilt motorway would have provided a bypass of the A41 and would likely have terminated on the M56,[6] though exactly where is unknown. The unfinished junction for this extension has now been demolished.

The final section of the M53 provided a link to Chester from the M56 and was opened in 1982. No plans are known to exist to complete the originally planned M53.[5]

Template:Attached KML/M53 motorway
KML is from Wikidata
This article is issued from Wikipedia - version of the 8/14/2016. The text is available under the Creative Commons Attribution/Share Alike but additional terms may apply for the media files.