West Kirby is a town on the north-west corner of the Wirral Peninsula in Merseyside, England, at the mouth of the River Dee. To the north-east lies Hoylake, to the east Grange and Newton, and to the south-east Caldy. At the 2001 Census, the population was 7,680.[2][3][4]

West Kirby is one of the more affluent areas of the Wirral.

The name West Kirby is of Viking origin, originally Kirkjubyr, meaning 'village with a church'.[5][6] The form with the modifier "West" exists to distinguish it from the other town of the same name in Wirral: Kirkby-in-Walea (now the modern town of Wallasey). The earliest usage given of this form is "West Kyrkeby in Wirhale" in 1285.[5]

The old village lay around St. Bridget's Church, but the town today is centred on West Kirby railway station, which is about 1 km away. The town has a Victorian promenade, flanked by the West Kirby Marine Lake that permits boats to sail even at low tide. The original wall was built to create the lake in 1899 but suffered a catastrophic leak in 1985.[7] A new lake was constructed on the site which is wider than previously and allows better sporting opportunities. The Hoylake and West Kirby War Memorial is a notable local landmark, designed in 1922 by the British sculptor Charles Sargeant Jagger, who was responsible for a number of war memorials around the world, including the Royal Artillery Memorial at Hyde Park Corner in London.

On 1 April 1974, West Kirby was absorbed into the newly created Metropolitan Borough of Wirral as part of local government reorganisation in England and Wales. At that point, West Kirby ceased to be in Cheshire for administrative purposes and became part of the new administrative county of Merseyside.

In February 2008 plans were raised for a regeneration of the concourse sports and leisure centre including new retail space and controversially a multi-storey car park. As of 2013 the project appears to have stalled with developers interest and funding wavering. Local residents' opposition is strong.[9] 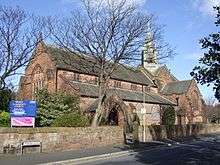 St Andrew's Church, at the junction of Graham Road and Meols Drive

West Kirby Library is situated within West Kirby Concourse, and operated by the Metropolitan Borough of Wirral. The West Kirby Museum, founded in 1892,[14] is located adjacent to St Bridget's Church. 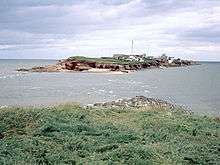 The town itself contains Ashton Park and a starting point of the Wirral Way, which follows the trackbed of the former Birkenhead Railway branch line from Hooton.[15] Sandlea Park lies in the centre of the town, a short walk from the railway station. Coronation Gardens is located between the southern end of the promenade between South Parade and Banks Road. There are various other small parks and bowling greens situated around the town. Another popular activity is to walk out to the islands of Little Eye, Middle Eye and Hilbre Island at low tide. The promenade, beach and the walk to the war memorial allow an excellent panoramic view of part of the North Wales coastline.

Sunset over the Marine Lake

Sailboarding, sailing and kayaking popular home to the Village youth project kayaking club, are all popular local sports. In October 1991 the World Windsurfing Speed Record was set by Dave White on the West Kirby Marine Lake at 42.16 knots. It was held for two years until it was beaten in Australia.

Water sports fans are reminded to wear appropriate footwear while using the marine lake due to the presence of weaver fish with sharp poisonous barbs. There is also an RNLI Lifeboat Station near West Kirby Sailing Club.[16]

The Royal Liverpool Golf Club, a links course sited between West Kirby and Hoylake, has hosted 11 British Open Golf championships in the past 121 years, most recently the 2006 and 2014 British Opens.

West Kirby contains a large man-made coastal lake, the 'Marine Lake'. The structure is large enough to hold sailing events, such as the Wilson Trophy, sailboarding and many more water related activities including: canoeing, kayaking, and power-boating.[18] In early 2009 it was reported that the lake had undergone structural damage, most likely due to estuarine erosion. Since this report a £750K refurbishment has taken place to help restore the lake, and is now back to holding water sport activities[19]

Grange Road, the main thoroughfare of West Kirby, is situated on the A540 road. The B5141, starting at the Dee Lane junction with Grange Road, joins West Kirby with Caldy via Banks Road, Sandy Lane and Caldy Road.

Services operating in the West Kirby area, as of 2014: