Madaba (Arabic: مادبا‎‎; Biblical Hebrew: מֵידְבָא‎ Meidvah) is the capital city of Madaba Governorate in central Jordan, with a population of about 60,000. It is best known for its Byzantine and Umayyad mosaics, especially a large Byzantine-era mosaic map of the Holy Land. Madaba is located 30 kilometres (19 miles) south-west of the capital Amman.

The town of Madaba was once a Moabite border city, mentioned in the Bible in Numbers 21:30 and Joshua 13:9.

During its rule by the Roman and Byzantine empires from the 2nd to the 7th centuries, the city formed part of the Provincia Arabia set up by the Roman Emperor Trajan to replace the Nabataean kingdom of Petra.

The first evidence for a Christian community in the city, with its own bishop, is found in the Acts of the Council of Chalcedon in 451, where Constantine, Metropolitan Archbishop of Bostra (the provincial capital) signed on behalf of Gaiano, "Bishop of the Medabeni."

During the rule of the Islamic Umayyad Caliphate, it was part of the southern district of Jund Filastin within the Bilad al-Sham province.

The resettlement of the city ruins by 90 Arab Christian families from Kerak, in the south, led by two Italian priests from the Latin Patriarchate of Jerusalem in 1880, saw the start of archaeological research. This in turn substantially supplemented the scant documentation available.

The Catholic Church's list of titular sees uses the spelling "Medaba", traditional in reference to the ancient bishopric centred on this city, while at the same time referring to the modern city as 'Madaba".[2]

In his memoirs, the German Count von Rantzau reports about his friend Sultan Gin-Achmed, Royal Prince of Madaba [3] both studying at Helmstedt University, Germany in 1729 and meeting again in Paris ten years later.[4]

The first mosaics were discovered during the building of new houses using bricks from older buildings. The new inhabitants of Madaba, made conscious of the importance of the mosaics by their priests, made sure that they took care of and preserved all the mosaics that came to light.

A 6th-century mosaic map of Jerusalem in the Madaba Map

The Map of Madaba mosaic was discovered in 1896 and the findings were published a year later. This discovery drew the attention of scholars worldwide. It also positively influenced the inhabitants, who shared the contagious passion of F. Giuseppe Manfredi, to whom the rediscovery of most of the city's mosaics are owed. Madaba became known as the "City of Mosaics" in Jordan.

The Madaba Mosaic Map is a map of the region dating from the 6th century and preserved in the floor of the Greek Orthodox Basilica of Saint George, sometimes called the "Church of the Map". With two million pieces of colored stone, the map depicts hills and valleys, villages and towns in Palestine and the Nile Delta. The mosaic contains the earliest extant representation of Byzantine Jerusalem, labeled the "Holy City." The map provides important details about its 6th-century landmarks, with the cardo, or central colonnaded street, and the church of the Holy Sepulchre clearly visible. This map is one key in developing scholarly knowledge about the physical layout of Jerusalem after its destruction and rebuilding in 70 AD.

Other mosaic masterpieces found in the Church of the Virgin and the Apostles and the Archaeological Museum, depict a profusion of flowers and plants, birds and fish, animals and exotic beasts, as well as scenes from mythology and everyday pursuits of hunting, fishing and farming. Hundreds of other mosaics from the 5th through the 7th centuries are scattered throughout Madaba. 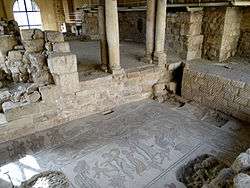 Hippolytus Hall in the Archaeological Park of Madaba 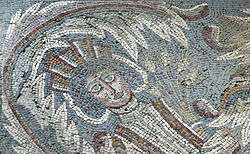 Detail of the Hippolytus mosaic in the Archaeological Park of Madaba

The University of Toronto has been excavating in Madaba from 1996 until the present. Their efforts have focused primarily on the west acropolis where an open field has allowed access to uncover the entire sequence of occupation at Madaba from the modern period down to the Early Bronze Age levels. The most visible feature of this area is a 7.5-meter-wide (25 ft) fortification wall built sometime in the 9th century BC, with subsequent rebuilds throughout its history. There is also the remains of a well-preserved Byzantine era house at the base of the fortification wall.[5]

The Institute of Mosaic Art and Restoration was originally created in 1992 as the Madaba Mosaic School, and funded by the Italian Government. It was a high school which offered the Tawjihi, the Jordanian equivalent of a high school diploma. In 2007, the Ministry of Tourism and Antiquities, under the Department of Antiquities partnered with USAID's Siyaha tourism development project, and a rejuvenated Italian commitment to launch the Institute as a 2-year, post-Tawjihi program. The aim of the Institute is to be a center of excellence in the region, and to train locals on a scientific level to conserve and restore the many ancient mosaics found in Jordan. Students are also taught traditional and modern methods of mosaic production, as well as Computer Aided Design (CAD), Arabic, English, geology, and chemistry. Soon, students will also be able to transfer their credits to Yarmouk University to complete a BA in Archaeology with a further two years of study.[7]

The Institute is located between the Madaba Visitors Center and the Madaba Archaeological Park.

Since the days of Rome, people have come to the thermal mineral springs of Hammamat Ma'in or Zarqa Ma'in for thermal treatments and use the baths.

Southwest of Madaba is Hammamat Ma’in, the thermal mineral springs that for centuries have attracted people to come and immerse themselves in the sites’ warm therapeutic waters.

A weaving project was started by twelve women of the tribe in 1985 and since then Bani Hamida has become famed for producing woven items in traditionally bright colors. Traditional ground looms, assembled using stones and sticks, are used for the weaving, and the products can be found at numerous outlets in Jordan and abroad. Visitors can stop by the weaving rooms, located in the village of Mukawir, to see how rugs are made. The women also make decorative candles.

Madaba has been chosen to house new universities (American University of Madaba) and a new settlement operation not far from the historic city will house over 600 villas. Kuwaiti corporations are now funding the construction of new office buildings to be built in Madaba.

Madaba’s main attraction is its Byzantine mosaics, drawing many visitors, especially since the creation of an archaeological park. They cover the floors of houses and churches dating from the site’s earliest period of habitation.

The nearby site of Umm ar-Rasas, south-east of Madaba on the edge of the semi-arid steppe, started as a Roman military camp and grew to become a town from the 5th century. It also has very large and well-preserved mosaics.

At the southern entrance to Madaba, near the King’s Highway, is the Church of the Apostles. The ruins of this Byzantine church date to 578 CE, and are currently being restored. It includes a mosaic known as the "Personification of the Sea", depicting a woman emerging from the sea, surrounded by mythical aquatic creatures and a hodgepodge of rams, bulls, parrots and exotic vegetation. The mosaic was signed by a mosaicist named Salamanios.

Madaba is twinned with: